The French president has offered to help mediate in diplomatic efforts to secure the release of political prisoners in Belarus during a meeting with leading opposition member Sviatlana Tsikhanouskaya. 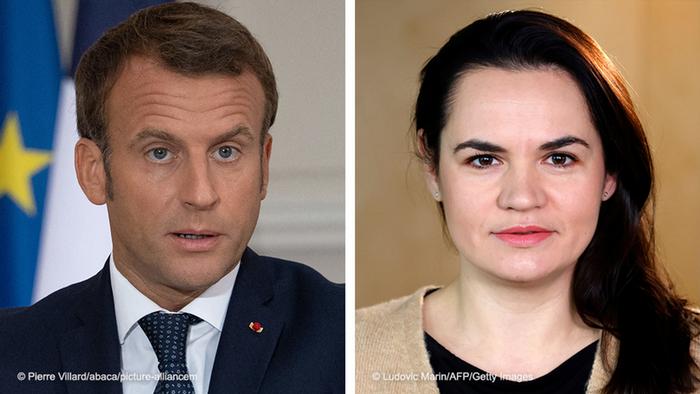 Belarus opposition leader Sviatlana Tsikhanouskaya met with French President Emmanuel Macron in Vilnius on Tuesday to discuss European support for the opposition in her country.

Tsikhanouskaya told reporters in the Lithuanian capital that Macron had promised to help negotiate the release of political prisoners in Belarus.

Tsikhanouskaya also told France's AFP news agency that she had accepted an invitation from Macron to speak before the French parliament.

Most high-profile meeting to date

Tuesday's meeting was Tsikhanouskaya's most high-profile round of talks with a foreign leader since the disputed August 9 presidential election in Belarus, in which both she and incumbent Alexander Lukashenko claimed victory.

She has already addressed the UN Human Rights Council and the European Parliament to encourage support for the Belarusian opposition.

Tsikhanouskaya is planning to visit Berlin next week, her spokeswoman said Tuesday. A meeting with German Chancellor Angela Merkel is being considered but has not been confirmed, according to Reuters news agency.

Tsikhanouskaya fled to Lithuania following the election amid a violent government crackdown on protesters and opposition figures.

Following Tuesday's meeting, Macron told reporters "we will do our best as Europeans to help mediate," adding that talks could progress through the Organization for Security and Co-operation in Europe (OSCE).

"Our objective is for this mediation to begin in the next few days or weeks," he said, adding that goals include a peaceful transition, the release of political prisoners and free elections held under international observation.

Macron has also said that OSCE mediation in Belarus would be a favorable option for Russian President Vladimir Putin, Lukashenko's main foreign ally.

However, Putin seemed to cast doubt on this assertion in televised remarks on Tuesday, saying that Belarus was under "unprecedented external pressure," while promising to stand by the government in Minsk.