The Nobel prize-winning author was the only member of the opposition coordination council's leadership neither in jail or in exile. The 72-year-old has arrived in Berlin. 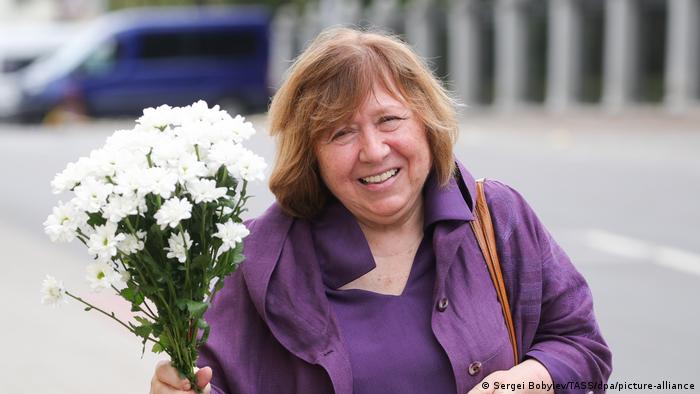 Alexievich was the last member of Belarus' opposition movement's leadership to remain free in the country.

The 72-year-old, who won the 2015 Nobel Prize in Literature, flew with Belarusian airline Belavia to Berlin.

She had been called in for questioning by investigators in Belarus before heading to Germany for planned treatment, her friend Mariya Voiteshonok told AFP.

"She will return to Belarus in a month. She is not dropping her activities as a Coordination Council member," Voiteshonok said.

The writer also planned to travel to Italy afterwards where she had been awarded a prize for her literature.

"She has planned meetings, a book fair in Sweden, and in Sicily she will be given an award," said Alexievich's spokeswoman, Tatyana Tyurina.

When Alexievich will return to Belarus "depends on how events will develop here and on her wellbeing," Tyurina added. "Of course, the return will also depend on whether the authorities will allow her to return."

Read more: Nobel prize laureate Svetlana Alexievich at 70: 'Reality has always attracted me like a magnet'

Belarus protests and the opposition

Mass protests have swept Belarus ever since President Alexander Lukashenko claimed a sixth term in office after August elections. The opposition says the vote was rigged.

Belarusian authorities have launched a brutal crackdown, arresting members of the opposition as well as demonstrators.

Alexievich was the only member of the opposition coordination council's presidium — set up by exiled opposition candidate Sviatlana Tsikhanouskaya — who was not either in jail or forced to flee abroad.

She had not escaped the attention of authorities. In late August, she was called in for questioning on as part of a criminal probe into an opposition council.

"There are no longer any of my like-minded friends in the coordination council's presidium," she said in a statement earlier this month.

This is an updated version of a previous article written before Alexievicha arrived in Berlin.