Belarus moved first, expelling all staff at Latvia's embassy in protest at opposition flags being hoisted at an ice hockey tournament. Minsk is currently the focus of outrage over its forced landing of a passenger jet. 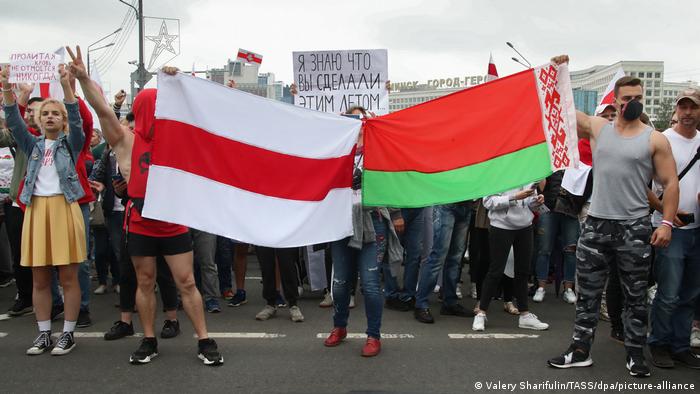 The different flags are a source of contention in Belarus, evoking different feelings about nationhood

Belarusian Foreign Minister Vladimir Makei on Monday said the entire Latvian embassy in Minsk had been asked to leave the country by midweek.

The decision was in response to Latvian authorities raising Belarusian opposition flags at an ice hockey championship.

The Latvian officials apparently hoisted the flags in a show of solidarity amid international outrage over Belarus' forced landing of a passenger jet on Sunday.

Makei said Belarus was expelling the entire staff of Latvia's embassy, including the ambassador.

The minister said Latvia's ambassador, Einars Semanis, had been summoned to the foreign ministry on Monday and given 24 hours to leave.

According the state-run news agency Belta, Makei said the summons was for "insulting the national flag."

"A strong protest was expressed to the ambassador in connection with the situation," Belta quoted Makei as saying.

The rest of the embassy staff were given 48 hours to leave, with one member of the administrative staff allowed to remain to look after the building.

One nation, two sets of colors

The switch of flags took place at the 2021 Ice Hockey World Championship, which Belarus had been due to cohost.

Belarus was excluded from its role in the tournament over "security concerns," and Riga was named the sole host.

The organizers raised the opposition's red-and-white flag — a symbol of the short-lived Belarusian National Republic in 1918 that has become a rallying point for opponents of Lukashenko. The flag was readopted in 1991 when Belarus won independence from Moscow, but done away with in 1994 when Lukashenko came to power.

Belarus' current official red-green flag includes and embroidered pattern and dates back to 1951, when the country was still part of the Soviet Union.

The change of flags came as Belarus came under fire from European leaders for forcing a Ryanair passenger flight from Greece to the Lithuanian capital, Vilnius, to land in Minsk on Sunday.

Belarusian officials then swooped on the plane to detain blogger journalist and opposition activist Raman Pratasevich.

The arrest was the boldest in a series of moves by Lukashenko's government to crack down on opposition figures and members of the press.

The campaign targeting opposition and independent media follows mass protests against Lukashenko. The longtime leader was re-elected for a sixth term in a disputed election in August 2020.

More than 34,000 people have been arrested in Belarus since August, with thousands of protesters beaten by security forces.