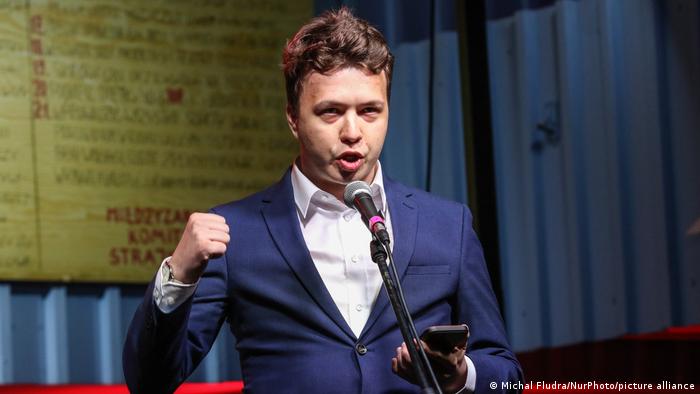 Pratasevich was the top editor in a key opposition media outlet

Raman Pratasevich, a 26-year-old Belarusian national, was "upset" after realizing the Ryanair fllght he was on was unexpectedly landing in Minsk, a witness told Radio Free Europe's Belarus department on Sunday.

"After a sudden turn of the plane, one guy [Pratasevich] started panicking, grabbing his head," the source, another passenger on the flight said. "There was no conflict up until the plane turned, no falling out, nothing."

According to pro-government media in Belarus, President Alexander Lukashenko himself ordered a MiG-29 fighter jet to be scrambled and intercept the Ryanair jet over an alleged bomb scare. No bomb was found on the plane.

"Lukashenko’s time is over"

Instead, Belarusian authorities detained the exiled reporter Pratasevich, who had been traveling from Greece to Lithuania. Pratasevich faces criminal charges in Belarus, including inciting hatred against the government. He is also on the nation's list of "individuals involved in terrorist activity." Belarus opposition leaders say he could face the death penalty in his native country.

Reporter's luggage 'thrown out' onto the runway

Upon landing in Minsk, security forces took the passengers out and had sniffer dog teams inspect their belongings, the passenger told Radio Free Europe.

Pratasevich's luggage was "thrown out on the runway" and he was taken aside.

"We asked him what was going on." the passenger said. "He told us who he was and added:  'A death penalty awaits me here.' He was a bit calmer, but trembling."

Eventually, he was taken away by the military, according to the source.

Pratasevich previously served as the editor-in-chief of opposition news outlet NEXTA, which the Belarus authorities have labeled as extremist.

Pratasevich suspected he was followed in Athens

In a separate interview to Deutsche Welle, an aide to opposition leader Sviatlana Tsikhanouskaya, Franak Viacorka said Pratasevich was in touch with him before boarding the plane and told him he suspected he was being followed.

"This morning I was in touch with Raman… he shared [with me] concerns that someone was following him in Athens airport," the politician said.

NEXTA also shared texts sent out by Pratasevich from Athens, in which he described a suspicious Russian-speaking man who seemed to try to get a photo of his travel documents.

"The great thing is, that he was the next in line to get his documents checked, and he just turned and walked away… at the gate," Pratasevich wrote, describing the man as "middle-aged, built, balding" and carrying a leather suitcase.

Talking to DW, Viacorka described the 26-year-old reporter as a "personal enemy of Lukashenko," saying that Pratasevich was "posting videos and pictures from a protest about torture in prisons, about the conditions in jails. He was one of the most prominent figures speaking about the horrible violations of human rights."

"I think what we saw today, it was their revenge, personal revenge of Lukashenko against Raman and his principled position right now," he told DW.