As protests rage in Iraq against a backdrop of unemployment, economic mismanagement and chronic underinvestment, Baghdad is looking to Beijing to offer a helping hand. China has not been slow to offer it. 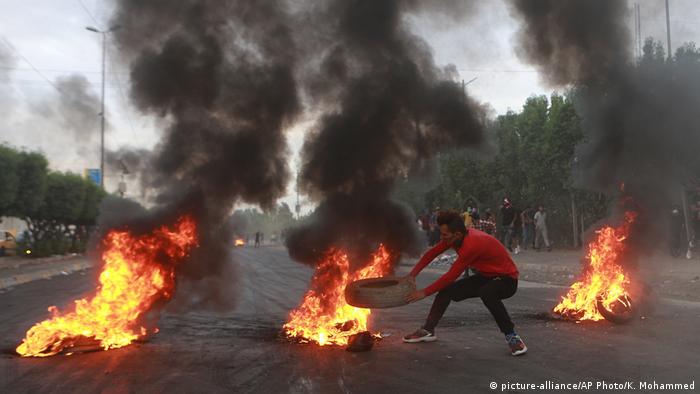 "We belong to Asia, and we want to be part of its rise," Iraqi Prime Minister Adel Abdul-Mahdi said on a visit to Beijing recently. Some 16 years after the end of the Iraq War, the Middle Eastern country is hamstrung by chronic, systemic failures, many of which stem directly from the chaos that followed Saddam's downfall and the US withdrawal.

Abdul-Mahdi, an economist who studied at the Sorbonne, noted on the visit that the Asian country had overtaken India in 2018 to become Iraq's largest trading partner, with the relationship exceeding $30 billion (€25 billion) in bilateral trade. Iraq was also now China's second-largest oil supplier, he said.

Iraq and China signed eight agreements during Abdul-Mahdi's visit, headed by a framework agreement between the Iraqi Finance Ministry and China Export and Credit Insurance Corporation, for projects including roads, rail networks, houses, ports, hospitals, schools, water dams, energy and transport. The framework credit agreement, which will start with $10 billion, sees the financing of major infrastructure projects from Iraqi oil exported to China, according to state news agency Xinhua.

Iraq pledged to provide China with 100,000 barrels of oil per day in exchange for infrastructure projects to be executed by Chinese firms. China's Hilong Oil Service & Engineering Company and the Iraqi Drilling Company agreed to create a joint venture to exploit oilfields throughout the country, including the Majnoon field, one of the largest in the world.

"The prime minister's visit to China is of major significance for Iraq and could establish partnerships of major projects with China, which could lead to the upcoming economic revolution in Iraq," the Al-Sabah newspaper quoted the Iraqi economist Ghadeer al-Attar as saying.

The deals also include work on Iraq's electricity and manufacturing, as well as building a Chinese library in the University of Baghdad.

One of the agreements signed involve the building of a joint Iraqi-Chinese manufacturing city in Iraq to produce goods meeting "world standards," according to the Iraqi minister of Industry and Minerals, Saleh Abdullah al-Jabouri.

Iraq's Ministry of Electricity signed an agreement with the Chinese Heavy Equipment Engineering Company, which is already engaged in construction projects in Iraq, notably that of the Saladin Electric Station.

But China's Belt and Road Initiative has faced criticism for often lumbering poor nations with heavy debt and is seen with suspicion by the US, which sees it as an attempt by China to increase its influence in the region.

The ongoing protests in Iraq present a major crisis for Abdul-Mahdi, who took office a year ago vowing to renew the economy after an election in which Iraqis cited corruption and the economy as their key concerns.

The World Bank predicts that Iraq's economy will grow by over 8% in 2020, and the poverty rate will fall below 22%. It pointed to US sanctions on Iran helping Iraq boost its oil exports, while the reopening of its border crossing with Syria, and the expected opening of one with Saudi Arabia, could further promote Iraqi exports.

Driven by events in recent weeks, the government rushed to pledge jobs and funds for the poor. It also promised the distribution of plots of land to low-income families, construction of 100,000 housing units, stipends to 150,000 unemployed and a training program for a further 150,000 people without jobs.

Parliament Speaker Mohammed al-Halbousi said all Iraqis with masters-level degrees would be put on the Education Ministry's payroll and security forces members, who deserted during the war with IS militants would be rehired and government contractors would get fixed employment.

Iraq made some steps to address its economic problems after the  2014-16 slump in the price of oil, which accounts for 90% of government revenue. Under IMF guidance, Iraq took steps to cut back on the state payroll, introduce taxation and suspend government hiring.

About 75% of Iraq's budget already goes to current expenditure, much of it used for patronage by political parties that control the country's ministries. Of the remainder spent on investment, only a fraction goes to infrastructure, which is crumbling across the country.

An estimated $450 billion that should have entered the state's coffers since 2003 has gone into the pockets of cronies, ghost contractors and army officers who reported nonexistent soldiers to collect their salaries.

Meanwhile, the government hasn't released unemployment statistics since 2017, when the jobless rate was 13% and youth unemployment nearly double that. And that, many believe, is where the problems lie and the work must start.

Iraqis ushered in October with anti-government protests in Baghdad. These quickly devolved into violent confrontations resulting in hundreds of injuries and dozens of deaths. Unease remains in several cities. (03.10.2019)