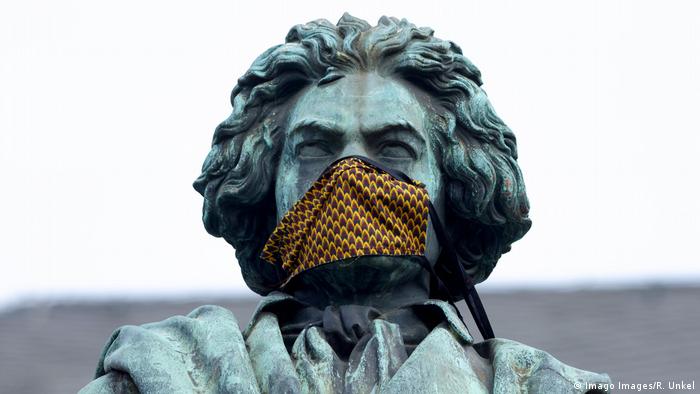 Orchestras, choirs and soloists around the world had planned special concerts to celebrate the  Beethoven jubilee year of 2020. But due to the COVID-19 pandemic, concert halls had to be shuttered, and concerts were canceled, postponed or performed digitally on a virtual stage.

However, open air concerts and performances for small audiences were still possible in Germany, up until late summer. This was also how pianist Susanne Kessel managed to stage some concerts as part of her international project, entitled 250 Piano Pieces for Beethoven. Only one world premiere couldn't be staged. 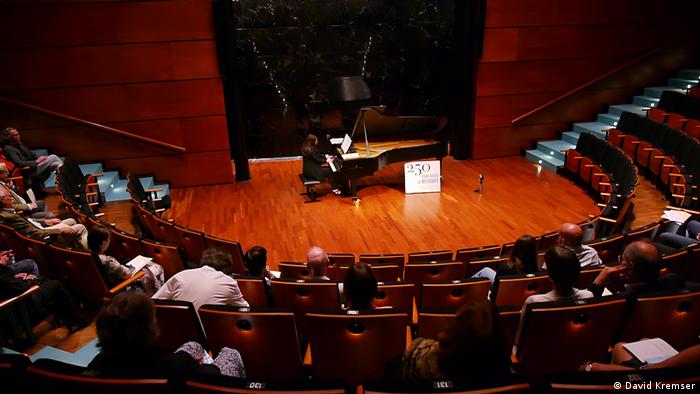 Susanne Kessel playing at the 'Beethovenhaus' in Bonn, where the musician was born

Kessel had asked selected composers from various genres to compose a musical birthday greeting for Beethoven. The Bonn pianist then performed each piece herself and invited the respective composers to come watch. "In over 200 concerts, more than 150 composers from 47 countries personally attended the concerts," Kessel told DW. "Beethoven can be proud that he left behind something that still inspires so many composers today."

Many famous orchestras and soloists had also wanted to honor the composer by performing his piano works, chamber music or great symphonies.

Star violinist Anne-Sophie Mutter was on a world tour playing Beethoven's most famous violin sonatas. After her concert in Japan though, she had to cut her tour short. "Back in March, I contracted COVID-19. I felt tired and then had to go into quarantine for two weeks." Consequently, her concerts were put on ice. "This turned into a long break. I didn't start performing again until September," she told DW.

Many other musicians suffered the same fate. Estonian star conductor Paavo Järvi was also unable to perform his planned Beethoven Symphony Cycle with the German Chamber Philharmonic Orchestra of Bremen. "This was, of course, quite unexpected. We had hoped that we could still perform the symphonies at a later date, but that didn't work either," Järvi told DW. "Maybe we should also think about giving more prominence to Beethoven's rarely played pieces. But we don't have any idea yet how to get back into the music industry. At the moment, things don't look so good there."

CDs instead of concerts

Ten years ago, the orchestra had meticulously studied and re-recorded all nine symphonies for the Beethoven Project. DW had accompanied this process on camera. To bridge the period of coronavirus-related restrictions, the orchestra has now released the Nine Symphonies together with Beethoven's overtures in a CD anniversary box set. 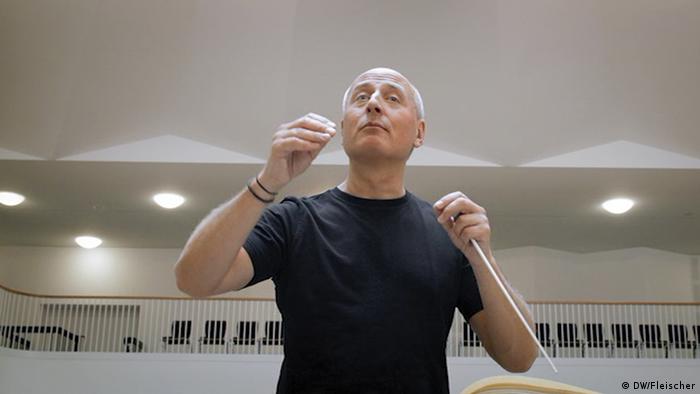 The orchestra does not yet know how and when to make up for the interrupted Beethoven Cycle in 2021. "At the moment, there is such a backlog of all the projects that could not take place that we have to wait and see what can still be achieved in the individual organizations," says Järvi. "That will be decided in the next few months."

Concerts that were held in countries with low infection rates, like Thailand, were almost exclusively organized by musicians living there. Under stricter hygiene regulations, an international Beethoven festival was held in November in Yekaterinburg, Russia, after all.

In Bonn, Beethoven's birthplace, the Beethoven Festival was cancelled due to the COVID-19 pandemic.

But despite all the obstacles, more events took place than the Beethoven anniversary organizers had originally expected.

The Beethoven Anniversary Society (BTHVN) hailed the global Pastoral Project as a great success in June, despite the absence of a live audience. Conceptualized as a digital project from the outset, it was based on Beethoven's Sixth Symphony, also known as the Pastoral Symphony, that lauds nature and the rural idyll. Artists and performers from around the world were invited to share their thoughts on our environment and upload their videos on to a platform. 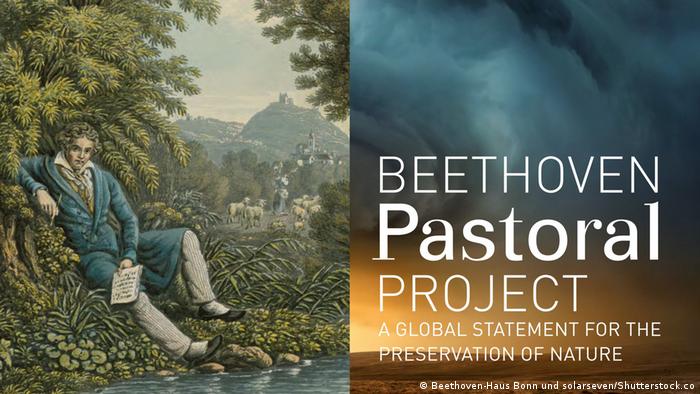 A global statement for the preservation of nature: The Beethoven Pastoral Project

Only 20% of the BTHVN projects were cancelled or postponed to a later date.

For example, a version of the 10th Symphony that was completed with the help of artificial intelligence will not be heard until 2021.

The Beethoven Year, under the patronage of German President Frank-Walter Steinmeier, has been extended in Germany until September 2021.

Goethe Institutes worldwide also commemorated the composer via the project The Other Beethoven. Concerts and exhibitions were planned in Arab, African, and Asian countries.

Beethoven's opera Fidelio, for example, is about the idea of freedom. Because the musical Fidelio wo bist du? (Fidelio where are you?) could not be performed in Romania, the Goethe-Institut there decided on a film project that was first streamed in November and is set to be shared around the world.

In Iraq, Beethoven's Egmont Overture is part of the standard repertoire of the national orchestra. German and Iraqi artists wanted to create a piece of music against violence, but the project has currently been put on hold. 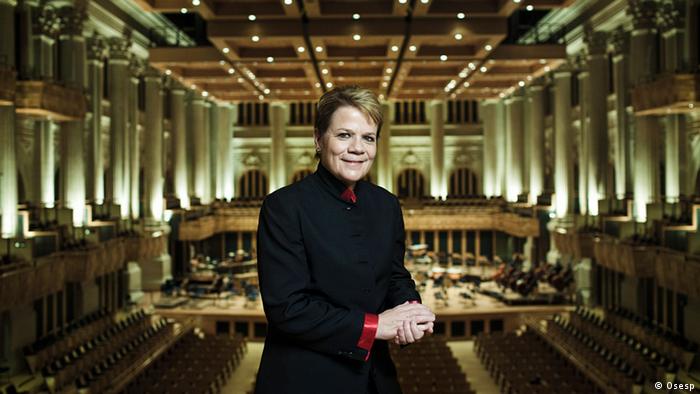 She had planned to conduct Beethoven's Ninth Symphony across the five continents with orchestras in New Zealand, the United States, Brazil, England, Austria, Australia and South Africa. The final chorus with Schiller's Ode to Joy was to be sung in the local languages of the indigenous peoples. It was to be a sign of fraternity between different cultures.

The opening concert in Sao Paulo managed to take place, but all other concerts were postponed. "We thought about what digital form the project could take," explains Also in the video. This resulted in the Global Ode to Joy.

Violinist Daniel Hope, president of the Beethovenhaus in Bonn since March, presented a new digital tour of the museum with a special exhibition on Beethoven in the same stream.

The video, featuring the global Ode to Joy played by the Austrian Radio Symphony Orchestra and sung by 1,000 singers on the screens, will also be featured at the big BTHVN digital birthday special, which will be streamed from Bonn to the world on December 16 and 17.

"In these troubled times we're having right now, where we're isolated, there are still people kindly doing their work and helping," Alsop says in the video. "I think Beethoven would be thrilled that his Ode to Joy is a message that is carrying us through these difficult times."

DW is broadcasting special content on December 17, on the occasion of Ludwig van Beethoven's 250th birthday. You can watch 24 hours of special programs on DW's Media Centervia Live TV (German) for from 9 a.m. (CET) on December 17.

At 8:15 p.m. on December 17, there will be a live broadcast of the BTHVN anniversary concert with Daniel Barenboim and the West-Eastern Divan Orchestra. German President Frank-Walter Steinmeier will hold the welcome address. You can also watch all content in German on the YouTube channel DW  Deutsch Livestream.