Next year, superstar Anna Netrebko will sing in Bayreuth. But as the current season begins, visitors are looking forward to a new production of Wagner's "Lohengrin" — including a stage set designed by Neo Rauch. 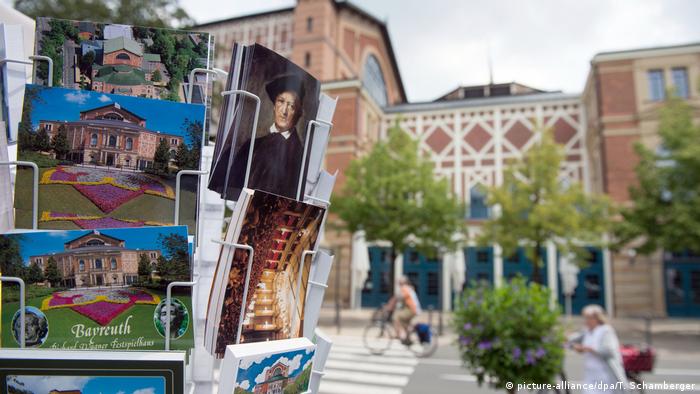 On Wednesday, July 25, the familiar ritual begins: celebrity motorcade and onlookers, fanfares, then the opera. This time it's Richard Wagner's "Lohengrin" with conductor Christian Thielemann, stage director Yuval Sharon and sets and costumes by the German artist Neo Rauch and his wife Rosa Loy.

Three acts and two hour-long intermissions later, invited guests will congregate at the Bavarian state government's official reception. On August 29, the festival draws to a close with a performance of "The Valkyrie." In the five weeks in between, 32 performances, all Wagner, all the time.

And that's exactly as it has been — with only few interruptions — since the first Bayreuth Festival in 1876. For a composer to found his own festival and to create gigantic visionary works to fit — and then devise his own theater for their performance — was unheard of in those days, and hasn't been repeated on a similar scale since. 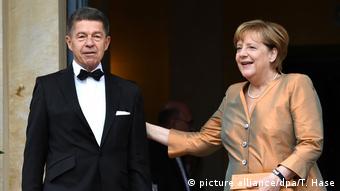 Chancellor Angela Merkel and her husband, Joachim Sauer, at Bayreuth in 2017

Wagnerians  on the Green Hill

By day two of the festival, the celebrities have mostly moved on, and the festival is populated largely by committed Wagnerians or those just curious about the composer's work.

Apart from "Lohengrin," the playbill this year includes opera productions introduced in previous seasons: "Parsifal," conducted this time by Semyon Bychkov and staged by Uwe Eric Laufenberg; "Tristan and Isolde" under the musical direction of Christian Thielemann with stage direction by Katharina Wagner; "The Mastersingers of Nuremberg" with conductor Philippe Jordan and staging by Barrie Kosky; "The Flying Dutchman" as interpreted by director Jan Philipp Gloger and with Axel Kober in the orchestra pit; and finally "The Valkyrie," which for the first time in festival history is being performed apart from the four-opera "Ring" cycle. Here the famous tenor Placido Domingo is making his conducting debut in Bayreuth.

A sensational casting announcement one day before the festival began nearly eclipsed everything else for a moment: next year, star Russian soprano Anna Netrebko will sing the role of Elsa in two performances of "Lohengrin." 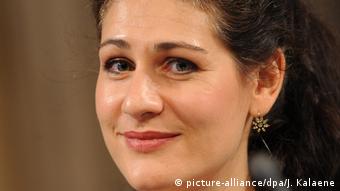 Anja Harteros sings the role of Elsa this season

Nonetheless, the 2018 festival opens with its own strong cast including Georg Zeppenfeld as King Henry, Anja Harteros as Elsa and — in the role of Ortrud — Waltraud Meier.

The German soprano has near legendary stature in Bayreuth but hasn't appeared there in 18 years.

Two in the cast are giving their Bayreuth debuts, and both come from Poland: Tomasz Konieczny as Telramund and Piotr Beczala in the title role.

Beczala had little time to prepare. About three weeks before the premiere, the singer Roberto Alagna, originally cast in the role, cancelled. The Pole then called off all other engagements, explaining that "Artistically, nothing better could happen. This production opens the festival, and it's a major role, even the title role — in a piece I've more or less mastered."

because Christian believed in me," Beczala added. 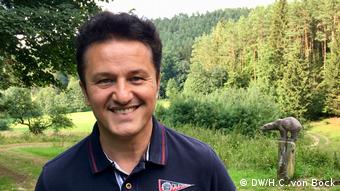 Christian Thielemann, who now with "Lohengrin" has conducted all ten of Richard Wagner's operas that are on the Bayreuth playbill, claims that his musical rendition has been inspired by the imagery in Neo Rauch's sets.

The well-known German artist, whose paintings sell for many millions, derived his inspiration, in turn, from Wagner's music. "For six years, Lohengrin has been a permanent guest in my atelier," said Rauch. "He now has air supremacy there. Listening to the music led to the images we see onstage."

Rauch has wrapped the stage in shades of blue, and his visual motifs include an old power plant. Meanwhile, the title character Lohengrin appears "in the trappings of an electrician one might have seen in the 1930s."

When asked about what it was like to work at the Bayreuth Festival with its troubled history and onetime close association with the Third Reich, Rauch added: "It's astonishing that this positive energy is released on contaminated grounds. You might say that we are performing a sort of exorcism."

For his part, American director Yuval Sharon has not opted for a strong political statement but instead for quiet social commentary and a take on "Lohengrin" as a fairy tale.

"During the performance, we allow dreams to develop," said Sharon, "but not in a certain direction. It's more like a state of being where one cannot really separate reality from dream." 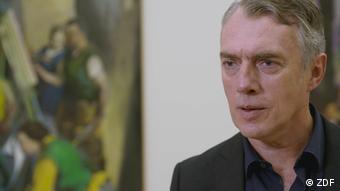 New endeavors in the spirit of Wagner

The festival program is complemented by a short version of "The Ring of the Nibelung" for children. Festival director Katharina Wagner was proud to announce ten years of opera for children at the Bayreuth Festival.

The side-program introduced in 2017 called "Discourse Bayreuth" focuses this time on "Prohibitions in Art," with lectures and panels examining censorship, taboos and ideological dictatorship — including political correctness — as well as art's internal laws and limitations and the issue of artistic freedom.

Marking the 100th birthday of Friedelind Wagner on March 29, 2018, the lecture series also focuses on the granddaughter of Richard Wagner, who, in protest at the Wagners' close association with the Nazi Regime, was the only family member to leave Bayreuth and Germany.

In the spirit of Richard Wagner, who always called for new creative endeavors, the "Discourse Bayreuth" program also includes a world premiere. Based on an ancient legend, "der verschwundene hochzeiter" (The Bridegroom Disappeared) by Austrian composer Klaus Lang is the first piece of music commissioned by the Bayreuth Festival and only its second world premiere after "Parsifal" in 1882. It won't be performed in the Festspielhaus but in an old silent movie theater in downtown Bayreuth.

In 130 movie theaters — mostly in the German speaking regions but also in Lisbon, Portugal — Wagner fans can follow this year's opening day performance of "Lohengrin" on July 25.