A new exhibition looks at how the Nazis used opera as a powerful tool of propaganda, especially during the Nuremberg Rallies. Hitler was personally involved in the staging of some epic Wagner productions. 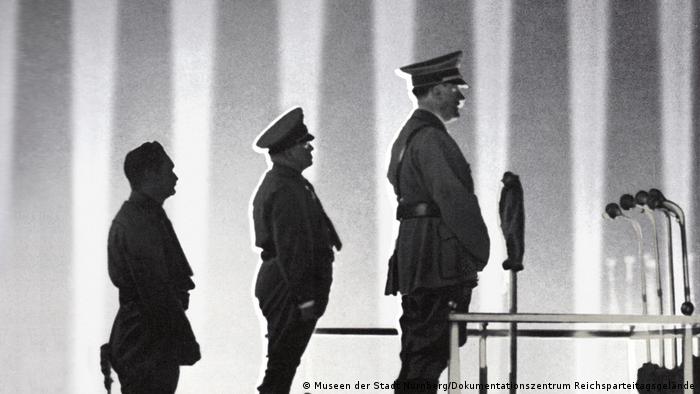 Hitler had declared Nuremberg the "City of the Nazi Party Rallies" in 1933, deciding that the medieval city's traditional role as a center of German trade, art and culture would provide a fitting backdrop for his epic, annual staged rallies — as would the municipal stadium, theaters, lakes and parks in which the vast annual events were held.

But for both Hitler and Propaganda Minister Joseph Goebbels — who oversaw the censoring and distribution of film, music, theater and the visual arts in the Third Reich — German music, and especially opera, would lend vital propagandistic impact to these mass Nazi military gatherings.

A new exhibition in Nuremberg's Documentation Center Nazi Party Rally Grounds graphically tells the story of how the Nuremberg Opera House and the site where the massive annual Nazi parades were held were dual stages through which art propaganda was instrumentalized by a murderous regime. 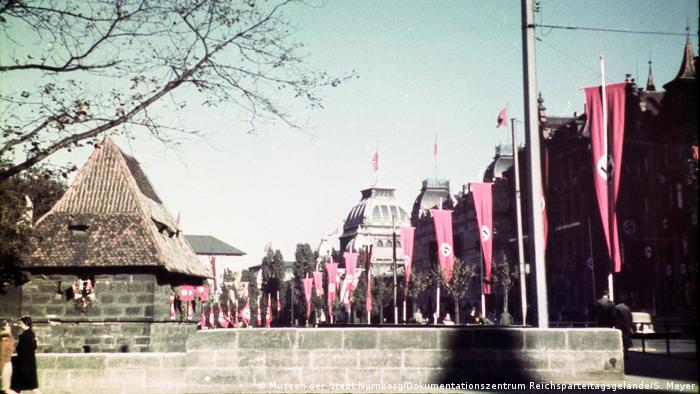 Elaborate stagings also transformed the city of Nuremberg during the rallies, reflecting the style of the opera productions

The title of the show, Hitler.Macht.Oper, is a play on the double meaning of the German word "Macht," which translates both as "makes" and "power"; the Führer himself was personally involved in some aspects of the opera stagings that celebrated his leadership.

Spanning 530 meters (1,740 feet) of the Great Hall on the former rally site, the new exhibition employs text, images, film and elaborate stage reconstructions to allow viewers to experience the full force of this powerful propaganda tool.

Richard Wagner's Die Meistersinger von Nürnberg (The Mastersingers of Nuremberg) is a four-and-a-half hour operatic odyssey and National Socialist favorite that was performed at the Berlin State Opera to mark the founding of the Third Reich in March 1933.

This "most German of all operas" fit the bill in terms of Nazi art propaganda, portraying the eponymous master singer Hans Sachs as a patriotic creative genius who works above all in the service of his people — and race.

The work made a triumphant return to its namesake city when the Act III prelude featured in Leni Riefenstahl's 1935 Nazi propaganda film, Triumph of the Will, which depicted the 1934 Nazi Party Congress in Nuremberg attended by hundreds of thousands of Nazi supporters.

The year the film was released, an epic rendering of Die Meistersinger opened the Nuremberg Rally at the Nuremberg Opera House. Performed by a high-caliber star ensemble selected by Hitler himself, and featuring opulent staging by Nazi designer and architect Benno von Arent, the tone was set for future Third Reich productions.

As detailed in the Hitler.Macht.Oper exhibition, Hitler himself ordered the reconstruction of the Nuremberg Opera House in 1934, such was its symbolic significance. Star Nazi architect Paul Schultze-Naumburg was charged with purging the "bourgeois, avant-garde architecture" of the Art Nouveau building and creating a more minimal and brutalist interior that reflected the institution's dual function as a venue for art and politics.

The annual Nuremberg Rally was itself subject to a strict stage direction. The epic militarily-influenced backdrop utilized typical theater staging such as floodlights, music, stages and decoration. Composer Friedrich Jung was therefore commissioned to create a monumental piece to be played during the "Great Appeal of the Political Leaders" ceremony during the 1939 Rally, which was however cancelled at short notice, as a day before its planned start on September 2, Germany invaded Poland. 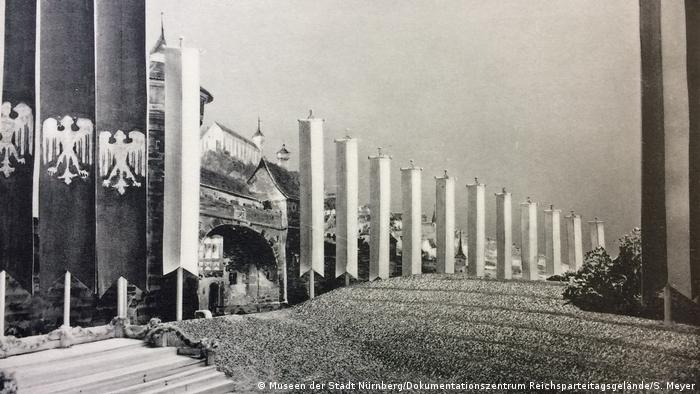 Benno von Arent's stage design for the Mastersingers of Nuremberg

Wagner's own anti-Semitism was no doubt also part of the appeal for Hitler, who was a long-time fan of the dramatic composer.

On the 200th anniversary of the composer's birth in 2013, the BBC asked: "Can we listen to, watch or perform Wagner's music with a clear conscience? Was Wagner's music despicably perverted by the Nazis, or did their adulation merely expose its inherent perversions?"

While the BBC piece acknowledged that Wagner was not a Nazi, he was indeed anti-Semitic. "Wagner had already made his monstrous sentiments clear, beginning with his infamous 1850 treatise On Jewishness in Music," noted the broadcaster.

Hitler was a true opera lover, attending performances almost daily during the time he lived in Vienna. In Mein Kampf, he described his first witnessing of a performance of the opera Lohengrin at age 12 as a life-changing experience.

The dictator liked to inspire the Nazi leadership with his favorite Wagner opera, Rienzi, a proto-fascist story of an Italian nationalist who rises up against Rome's corrupt elites. Like Die Meistersinger, these were stories of great saviors of the people that would become analogous with Hitler and would help promote his own cult of personality.

In 1938, the Nazis celebrated a week of nationalistic music with the Reichsmusiktage, or Reich's music days, with Hitler youth choir and Berlin Philharmonic performances; but a concurrent exhibition, Entartete Musik (Degenerate Music), in Düsseldorf was used to denounce and ridicule "unGerman" black and Jewish music.

Half a year after the infamous Degenerate Art exhibition, Jewish composers like Arnold Schoenberg, Kurt Weill and Hanns Eisler (who later composed the East German national anthem), in addition to African-American jazz musicians, were pilloried by a regime that was also busily promoting Wagnerian opera, including to foreign observers.

However, in secret, the self-appointed Messiah of the German people actually had a predilection for diverse forms of music.

Hitler's record collection, which was rediscovered in 2007, included Russian composers such as Peter Tchaikovsky, Alexander Borodin and Sergei Rachmaninoff that the Nazis had labeled as "subhuman," according to a Der Spiegel report — indeed, star violinist Bronislaw Huberman, a Polish Jew, featured on one of the found Tchaikovsky recordings. 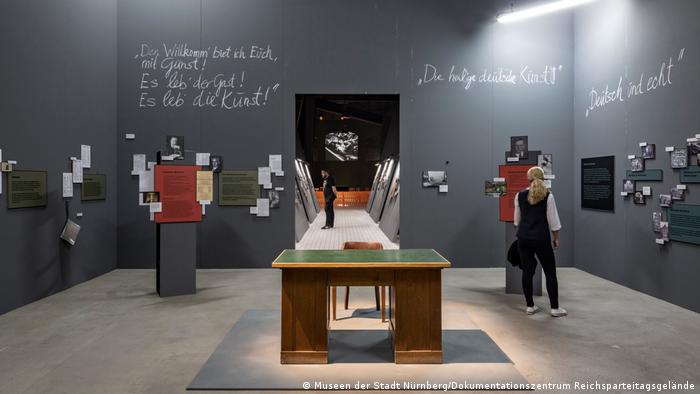 From the director's office, the exhibition leads to a reconstructed theater stage

Largest exhibition of its kind

It is divided into seven themes such as "Mastersingers," "Opera" and "Twilight of the Gods" — or Götterdämmerung in German, the name of Wagner's opera that was one of the last to be staged by the Nazi regime in 1944 in the bomb-damaged Nuremberg Opera House.

The exhibition is the largest of its kind on the subject of music theater under National Socialism since the renowned exhibition on "degenerate" music in Düsseldorf in 1988.

Anti-Semitic Richard Wagner letter up for sale in Israel

An anti-Semitic letter from Hitler's favorite composer is being auctioned in Israel."Wagner would roll over in his grave" if he knew that a bearded Jew in Jerusalem would profit from his letter, the auctioneer said. (22.04.2018)

Eighty-five years ago, fires fueled with literature labeled "un-German" by the Nazi regime burned across the country. Many students enthusiastically joined in the act at the time. (10.05.2018)

The Gurlitt find: 'degenerate' and Nazi-stolen art exhibitions in Bern and Bonn