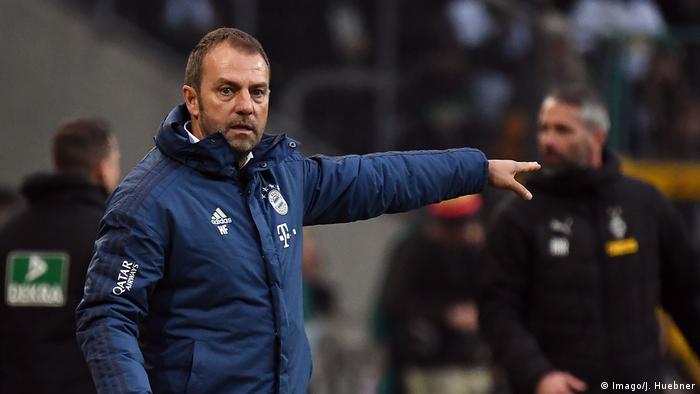 Like millions of people across the world, Bayern Munich's players and coaching staff are learning to live with a new normality. The Bundesliga leaders are training via video calls, with players going through their conditioning drills in gardens and on rooftops rather than on the training ground.

"At first it felt like it didn't correspond to reality," the club's coach Hansi Flick told German news agency DPA this weekend. "We have the team together almost every day, even though this is cyber world."

Though a couple of Bundesliga clubs, such as Wolfsburg and Augsburg, have returned to more conventional training, the advice from the DFL (German football league) is not to do so before April 5. That's the plan for Bayern as things stand.

"FC Bayern is viewed differently," Flick said. "We would do well to act as a role model."

Bayern last played a match on March 8, with Bundesliga games and their Champions League second leg against Chelsea postponed soon after. And, with the likely need for a mini-preseason even if the virus can be contained soon, it may well be the beginning of May at the earliest before top level football can resume.

"I do believe that the season will continue. I'm thinking positively," said Flick. But the 55-year-old, who has enjoyed a strong start in the hot seat, thinks things can't be the same for a while.

"I think everyone realizes that ghost games are the only way to do it, to finish the season," he added.

That will be news to many fans, who still hope to see their team in action again soon, though nobody really knows how feasible that is at this stage.

Just as the fans are missing the game, so the players are struggling to cope with their new routines.

"The competition is missing. You can't get rid of the energy," said Joshua Kimmich. "Everybody looks forward to training outdoors."

Germany international Kimmich, along with Bayern teammate Leon Goretzka, has been at the forefront of the #Wekickcorona campaign, with the pair donating €1 million ($1.1 million) to social and charitable organizations battling the pandemic. Bayern's playing group are among several clubs in the Bundesliga to have taken a pay cut to help club staff or charities in trying times.

Goretzka, who has become vocal about several social causes in recent times, told German TV channel Sport 1 that he's hoping for a date to aim for.

"Light at the end of the tunnel would be helpful to get through the rest of the tunnel," he said. He's far from alone in such a thought.

Kaiserslautern now play in Germany's third division. But 22 years ago, they shot up from the second tier to win the Bundesliga at the first go, crushing Bayern Munich on the way. DW looks back on an unlikely title win. (28.03.2020)