The German Bundesliga champions are in Qatar for their winter training camp. In an interview with DW, Human Rights Watch’s Wenzel Michalski criticizes the trip, urging the club to publicly address human rights issues. 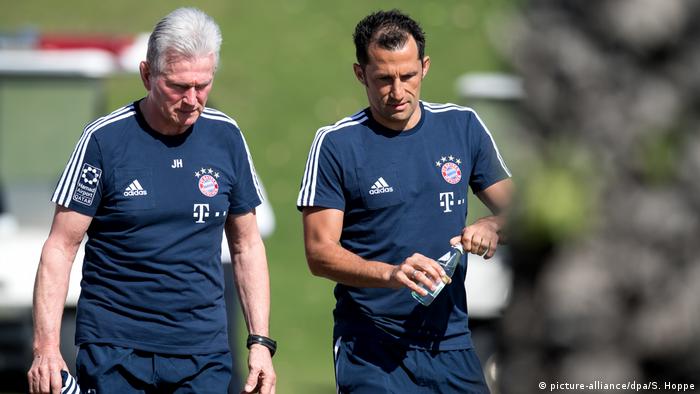 DW: Bayern Munich are holding their training camp in Qatar for the eighth time. What's your view on the matter?

Wenzel Michalski: As a human rights organization, we have nothing against Bayern Munich training or playing in Qatar. But as a member of major national and international associations, such as the German Football Association (DFB) and UEFA, the club must make sure that it's not involved in any human rights violations, not even indirectly.

What do you mean by "indirectly"?

They're using buildings and infrastructure where it's very likely that human rights abuses have been committed. It obliges the club to speak out publicly. Bayern cannot remain silent on that. This is an international obligation for big companies, clubs and organizations. 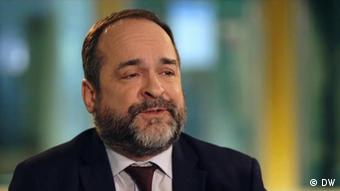 Is Bayern living up to this obligation?

No. So far, we've been disappointed that the club hasn't commented publicly on this issue. Bayern is a company with statutes and values, and their silence on the issue contradicts the values the club claims to champion. Moreover, it's also incompatible with the values claimed by world sports in general — namely supporting fairness and equal rights, or opposing exploitation and slave labor. All of that exists in Qatar.

Bayern's CEO Karl-Heinz Rummenigge said that Germany's Foreign Minister Sigmar Gabriel "recently confirmed [to him] that the situation for workers in Qatar has improved thanks to football." Do you agree?

Foreign Minister Gabriel himself flew to Qatar and found that the conditions on the various construction sites are really bad. He also claimed to be aware that he was only shown the showpiece projects. So I suppose there must have been some sort of a misunderstanding between Karl-Heinz Rummenigge and Sigmar Gabriel.

It's true that some change has taken place, also positive things, but only on construction sites for stadiums that are being built ahead of the 2022 World Cup. But that's only because the whole world is watching these particular construction sites, and criticism has been huge. The working conditions on other construction sites, which are currently off the world's radar, need the same sort of attention.

How do you assess the current situation for guest workers in the country?

The situation has improved to some extent, but only when it comes to prestigious sites, where international companies are also involved. We can't say that about other construction sites. We cannot obtain permits to visit those sites, which is already suspicious. 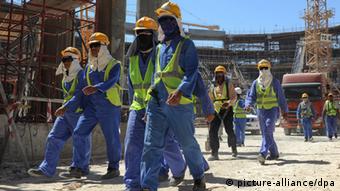 Nevertheless, a lot has changed in recent years, but mostly on paper. Laws have been changed, the kafala system has been abolished, companies that do not pay their workers will have to pay a fine. But we have not seen those laws being enforced in practice. There is a lack of transparency and therefore a lack of evidence that anything has really changed.

Clubs like Borussia Dortmund or Eintracht Frankfurt, who previously held their training camps in the Emirates, are now holding them in Spain. What do you think of that?

I think not going there anymore is the right call and I can only welcome that decision. It would be good for Bayern Munich to follow those examples, or at least announce that if nothing changes in Qatar then they'll leave. Should that resonate — and Qatar starts enforcing its theoretical labor laws on a national level, and not only at sample sites — the Bayern would have achieved something that the world of sports has been trying to do for many years unsuccessfully. Namely, to demonstrate that sports can lead to an improvement of living conditions. So far, major sporting events have typically led to a worsening of living conditions in the relevant countries. 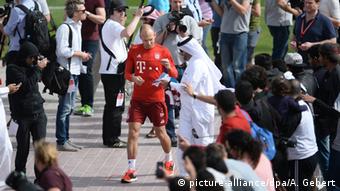 Bayern Munich is sponsored by Hamad International Airport in Qatar. What do you make of that?

If you're sponsored by a country or a business with such a high risk of illegal covert or public activity, then you also carry responsibility and risk. And it would be in the interest of Bayern to ask, for example, how the airport was developed, and then consider whether to proceed with the deal or not. Bayern Munich is hardly a poor club, so I don't really understand this sponsorship deal.

Will Bayern Munich live up to its exemplary model role?

As long as the club does not communicate transparently and as long as it doesn't publicly advocate for the human rights of workers to be enforced in Qatar in accordance with international standards, then the perception of Bayern as role models is unjustified.

The interview was conducted by Thomas Klein.