Karl-Heinz Rummenigge has again called for the 50+1 rule in German football to be abolished. The Bayern Munich chairman said that the rule is making it difficult for German teams to compete in Europe. 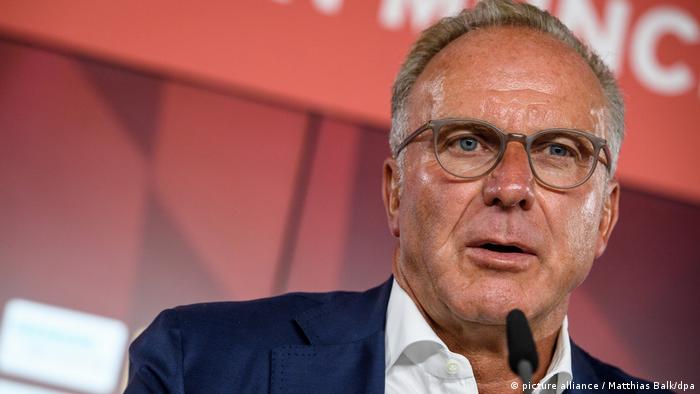 Speaking in Miami at the end of Bayern Munich's US tour, club chairman Karl-Heinz Rummenigge made his strongest call so far for dropping German football's 50+1 rule, which is designed to ensure that the controlling stake of any club is owned by its membership. This prevents wealthy outside individuals from seizing control of a club overnight, as is sometimes the case in the English Premier League, La Liga, Serie A or Ligue 1.

However, Rummenigge, 62, argued that the Bundesliga needed to open its market or sooner or later it wouldn't be able to compete with Europe's other big leagues.

"Either we go down this path as well or we will wind up paying a price for not doing so," he said.

"Everyone is worried and fearful that we will lose competitiveness if we open up the market. The opposite is true, Germany would benefit from it," he said.

He said he was particularly frustrated with the "shilly-shallying" surrounding the 50+1 rule and the stances of the German football league (DFL), which operates the Bundesliga and the German football association (DFB) – and he accused supporters of the rule of "populism."

Rummenigge added that Bayern supported the suggestion of Eintracht Frankfurt, which would allow each club to decide for itself whether it wants to continue to adhere to 50+1.

He also noted that the rule already didn't apply to four clubs, naming them as Bayer Leverkusen, Wolfsburg, Hoffenheim and RB Leipzig.

In March, a majority of Germany's 36 first and second division clubs voted in favor of retaining the rule.

No decision yet on Boateng

The former West Germany forward also confirmed that Bayern defender Jerome Boateng's agent was in contact with Paris Saint-Germain about a possible move but said there had been no contact between the clubs.

"No final decision has been made," Rummenigge said. It's thought that Bayern are looking for at least €50 million ($58 million) for Boateng.

The president of Hannover has failed in his attempt to assume majority control of the Bundesliga club. Martin Kind had sought to be granted an exemption from a rule designed to avoid takeovers from individual investors. (18.07.2018)