Bundesliga clubs have voted to retain the 50+1 rule, which ensures that German football clubs must retain a 50 percent plus one share in the team. They also voted to keep VAR for at least another season. 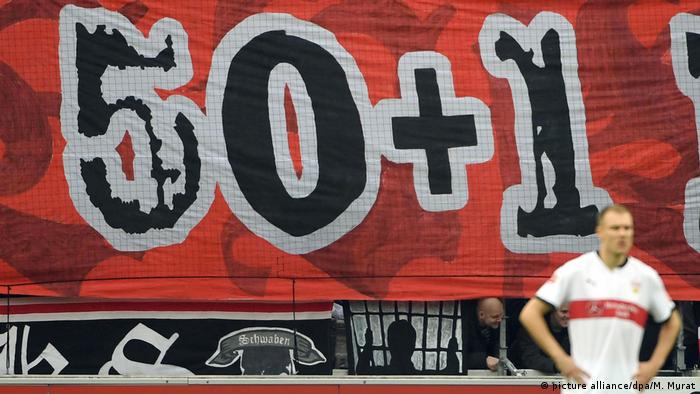 A majority of the 36 Bundesliga and Bundesliga 2 clubs voted on Thursday for the retention of German football's so-called 50+1 rule, approving a motion tabled by second division club FC St. Pauli.

The 50+1 rule states that a German football club must retain 50 percent of the shares in its professional football team, plus one share, thus preventing any other shareholder or entity from acquiring a majority stake.

After hearing aid manufacturer Martin Kind temporarily withdrew his application to obtain an exemption from the rule and acquire majority control of Bundesliga side Hannover 96 in February, the German Football League (DFL) called for a "fundamental debate" on the future of the 50+1 rule.

Thursday's meeting was initially only intended to discuss the parameters of that debate, but the acceptance of St Pauli's motion means that the only discussions that will now take place will concern whether the ruling can me made more legally secure.

"This is a great sign," said St. Pauli CEO Andreas Rettig. "There were intense discussions but we have found a good compromise. This is a good decision for all those who have the good of football at heart."

"We had a lively discussion and frank exchanges," reported DFL President Reinhard Rauball. "The 50+1 rule belongs to the foundations which have strengthened German football and anchored it in society."

The decision is also being seen as a victory for the "50+1 stays" campaign, which presented a petition signed by over 3,000 fan groups from across Germany to DFL officials ahead of the talks. However, Rettig also cautioned:

"Now is not the time to sit back with our hands on our laps, nor to completely shut ourselves off from new developments. We must be open to changes, but only within the paramters of 50+1."

Speaking to the Deutsche Presse-Agentur (DPA), Martin Kind confirmed that his application for an exemption from 50+1 at Hannover will remain on ice. "That's it for the time being," he said. "Let's wait and see what modifications are made."

A majority of clubs also voted in favour of the video assistant referee (VAR) for top-flight Bundesliga games and an offline test phase for the second division from next season.

Despite considerable teething problems, including confusion about why decisions are made and lengthy delays, Germany's top 18 clubs unanimously voted to keep the VAR for next season with only one abstention.

The VAR had been trialled in Germany this season and despite plenty of negative feedback — World Cup winner Sami Khedira branded it a "disaster" — the system will be used again in the Bundesliga in 2018/19.

Opinion: 50+1 is what makes the Bundesliga good