The former US president has taken to the campaign trail on behalf of Democrat candidate Joe Biden, warning voters not to be complacent. But Donald Trump gave as good as he got at a rival event. 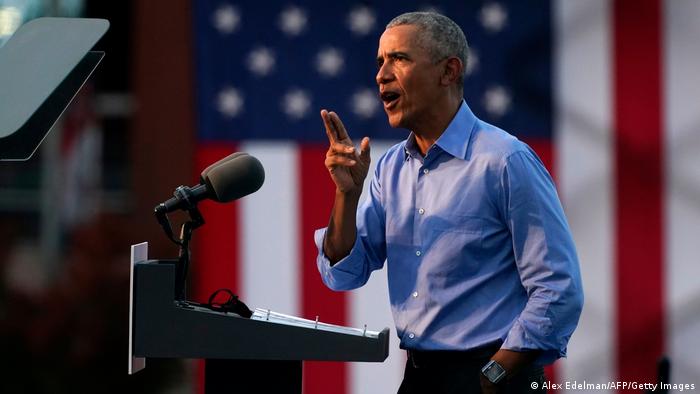 Former US President Barack Obama delivered a scathing criticism of President Donald Trump on Wednesday in the swing state of Pennsylvania, while warning voters not to be complacent despite favorable opinion polls for Democrat candidate Joe Biden.

Speaking to a drive-in Biden campaign rally with about 300 cars in the east coast city of Philadelphia, Obama accused Trump of being unfit for office and uninterested in solving problems facing Americans.

"He hasn't shown any interest in doing the work or helping anybody but himself and his friends," Obama said at his first in-person campaign appearance on behalf of his former vice president.

Trump and Biden are due to hold their final televised debate on Thursday before the election on November 3.

"This is not a reality show," said Obama. "This is reality, and the rest of us have had to live with the consequences of him proving himself incapable of taking the job seriously.''

Obama also tried to remind potential Democrat voters of opinion polls in the 2016 presidential election that had Hillary Clinton as a clear favorite to win the presidency.

"We can't be complacent. I don't care about the polls," Obama told the crowd. "We've got to turn out like never before," he said. "We cannot leave any doubt in this election." 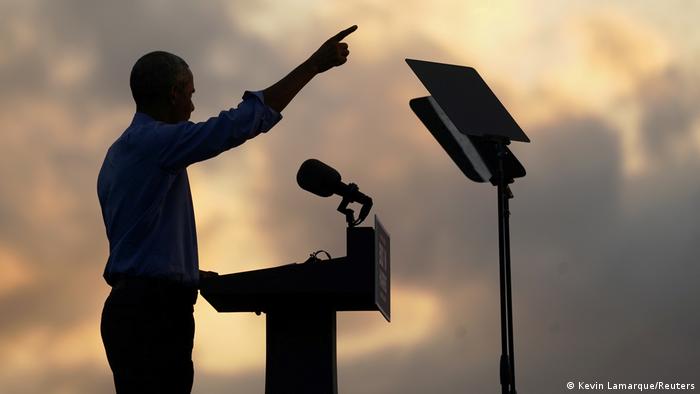 Obama urged voters to 'turn out like never before'

Both Biden and Trump are focusing on Pennsylvania, which has 20 electoral votes and was a key, albeit narrow, victory for Trump in 2016.

Read more: US election: 'COVID changed nothing' for Trump supporters and opponents in Ohio

A poll of likely voters released by Quinnipiac University on Wednesday shows Biden with a 51-43 lead in the state.

'All over the place'

Trump, in his turn, took time for sideswipes at Obama at an outdoor campaign rally in Gastonia, North Carolina — another crucial battleground state.

The president mocked his predecessor for having backed Hillary Clinton at the 2016 elections that saw him come to power.

"There was nobody that campaigned harder for crooked Hillary Clinton than Obama, right?" he said. "He was all over the place."

"I think the only one more unhappy than crooked Hillary that night was Barack Hussein Obama," he added.

He also referred mockingly to reports that Obama had asked Biden not to take part in the 2016 election because he felt that Hillary Clinton had better chances.