Can Americans have faith in their electoral system? | World | Breaking news and perspectives from around the globe | DW | 14.10.2020

Can Americans have faith in their electoral system?

A deeply divided US is heading towards its election with polls showing many people are afraid of violence. DW’s Conflict Zone talks to Ken Cuccinelli, Acting Deputy Secretary for the Department of Homeland Security.

U.S. President Donald Trump has repeatedly issued warnings of chaos and fraud in the upcoming presidential election, even speaking of what he believes could be "the greatest election disaster in history."

But Ken Cuccinelli, Acting Deputy Secretary for the U.S. Department of Homeland Security, said so far "nothing large scale" has been detected.

Cuccinelli added that "fraud takes place in one location at a time, one state at a time, and obviously we do everything we can to support our state partners in policing that."

Speaking to DW’s Conflict Zone host Tim Sebastian from Washington D.C. with less than a month to go until Election Day, Cuccinelli said that at a federal level, "this is the most well protected election we’ve ever had."

"We focus on cyber protection and dealing with nation states and people attacking the whole system," he said. "We've got better surveillance than we've ever had before."

Asked by host Tim Sebastian on whether he is concerned about an increase in the number of firearms sales ahead of the election, Cuccinelli said it has "nothing to do" with the upcoming vote.

"We have seen that spike since the civil unrest began in the spring, in May," he added.

The Federal Bureau of Investigation (FBI) said it conducted a record-high 3.9 million background checks in June related to the purchase or possession of firearms.

Cuccinelli also dismissed concerns about a survey this month which found that around a third of Americans justify some degree of violence to advance political goals.

He described it as a "left-wing phenomena in the United States and it has grown regardless of Donald Trump." 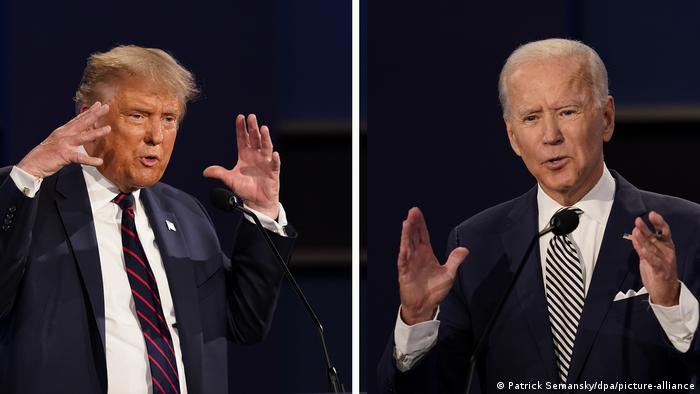 Americans will decide in November whether Donald Trump can remain in the White House for another four years. Trump's rival, Democratic Party nominee Joe Biden, has been ahead in most national polls.

Another issue of concern in the United States has been President Trump’s refusal to guarantee that he would accept the election results and leave the White House if he loses.

"Well, we’ll have to see what happens," said Trump in September during a news conference at the White House.

Cuccinelli insisted that the president "has never, never given any indication that the outcome of the election wouldn’t be exactly what the voters determine."

He maintained that "it’s what it was last time. It’s what it’s been every time in the history of the United States and that’s what it will be this time."

Cuccinelli stressed that "the key for this president is that Americans decide that election, that we block out the interference of outsiders and that American votes are each counted and each counted once and properly."

"The result will be what it is under our system and we’ll all move on with that on January 20th, regardless of who’s sworn in as the next president," he concluded.

COVID-19: Trump 'no longer a transmission risk to others'

The US president is no longer at risk of transmitting coronavirus, according to his physician Sean Conley. Trump restarted his re-election campaign on Saturday with a speech to supporters from a White House balcony.

US Democrats seek means to remove an unfit president, weeks before vote

Senior US Democrat Nancy Pelosi has put forward proposals for a new commission that could decide whether a US president is unfit for office. She argued it was "not about Donald Trump," who will soon face voters anyway.

Ex-US President Donald Trump filed a lawsuit to keep records leading up to the insurrection secret. The January 6 committee in Congress is investigating the Capitol siege and individuals who organized it.