With few burqa wearers in Austria, police have often been forced to deal with the absurd side effects of the law. Public opinion, however, remains divided one year after the country banned full-face coverings. 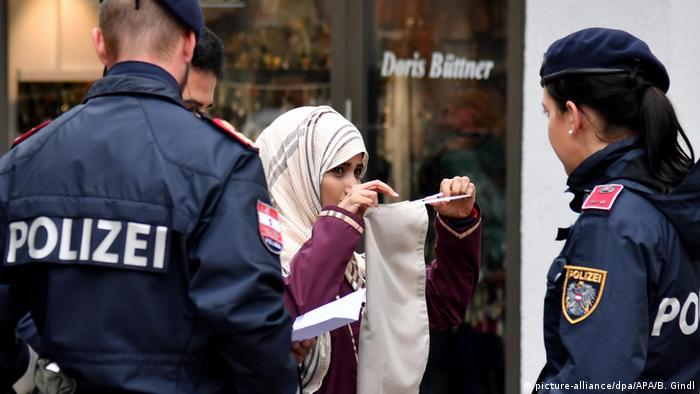 "Not much has changed," says Herbert Trappel, enjoying a glass of wine at an outdoor sausage stand at Vienna's Viktor Adler Market. "When was the law introduced, back in April?"

The stand's proprietor, Vesna Dudek, shakes her head indecisively. You used to see a few fully veiled people walking around here, she says, but they've disappeared from the streetscape. But otherwise, she adds, there's nothing else to say.

But back when Austria banned full-face coveringswith its so-called burqa ban last October 1 (not in April), the country was caught up in a heated debate over the issue, one that even drew in comments and criticism from abroad. In the beginning, almost everything went wrong: Police confronted costumed mascots and street musicians and admonished cyclists for pulling scarves too far over their faces.

The new law had, in fact, a crucial design flaw: It couldn't ban burqas outright, as that would have been seen as deliberate discrimination against Muslims. As a compromise, the then government came up with the religiously neutral "Anti-Face-Covering Act," outlawing all face coverings, no matter the religion.

In the year since the law came into effect, there have been relatively few confrontations between police and women wearing burqas — mostly because there are few women living in Austria who cover themselves fully in the first place. There are no official statistics as to how many women in Austria actually wear a burqa.

Instead, they ended up fining a man dressed in a shark suit, who was simply distributing flyers for electronics store McShark — an incident that made headlines on international news and satire programs.

The burqa ban, which was never one in the first place, made Austria into a laughingstock. And for those critical of the country's political swing to the right, it has provided the ideal argument to point out what happens when populism triumphs over reason.

'People wearing burqas have something to hide'

But Herbert Trappel doesn't agree with this line of reasoning. He thinks the law was the right move, despite all the difficulties with its implementation. "You often have the feeling that people wearing burqas have something to hide," says the 63-year-old. "It goes against my views as an enlightened person — I don't like it."

He works in a hospital, where he often deals with foreign patients. There, it's particularly important to him that people show their faces. He has nothing against Islam, he says, but he doesn't like "all the disguises."

At the Viktor Adler Market in Vienna's Favoriten district, many women wear elaborately tied hijabs, loosely draped shaylas or the chador, which reaches down to the ground. The 10th district is seen as home to Vienna's largest proportion of Muslims, even if the impression is only based on estimates. The last confirmed statistics date back to 2001, when 11.2 percent of residents described themselves as Muslim.

'It's become harder with a headscarf.'

Two such residents are Betti and Havva, both young women who were born in Vienna. They don't recall seeing many women wearing the full veil on the street, even before the ban. "Maybe two, three a week," says Havva, who is wearing a black headscarf. But she does have a friend, she says, who covers herself completely and only rarely leaves the house. "And when she does, she wears a medical face mask and carries a doctor's certificate."

This loophole has also been used by some of the many Arab travelers who flock to Austrian tourist destinations, such as Zell am See near Salzburg. It's estimated that the Salzburg region welcomes around 350,000 guests from the Arab world every year.

Over the summer, local police issued some 200 fines to women violating the law. But, as a police spokesperson recently explained on Austrian state radio, most women would eventually remove their covering after officials briefed them on the new regulations. By contrast, in the first half of 2018 Viennese police reported only 20 breaches of the law. The Interior Ministry would not provide figures for the whole country.

"It has become more difficult with a headscarf in recent years," says Havva. Betti, who doesn't wear a headscarf, nods. "Even at school, I've realized that it plays much more of a role, that teachers look at you differently."

Chancellor Sebastian Kurz's new coalition between the center-right Austrian People's Party (ÖVP) and the far-right Freedom Party (FPÖ) — which took office after the ban — has run with the issue. It has announced a new law that would ban headscarves from primary schools and even kindergartens. But according to experts, even here there is a lack of reliable figures: Many doubt there are even any kindergarten children who wear a headscarf.

So far, the ÖVP-FPÖ government has been unwavering in its "fight against political Islam." It's what they were elected to do, especially here in Favoriten, where they won far more votes compared to the federal average. After their victory last October, Vice Chancellor Heinz-Christian Strache of the FPÖ loudly proclaimed that "Islamization must be stopped" — and now the government wants to deliver.

In June, it closed seven mosques as part of a crackdown on "political Islam," one of them in Favoriten. Sitting not far from the shuttered place of worship is 35-year-old Anna-Maria Tastekin. A former local, she moved away to greener pastures a year and a half ago, but occasionally returns to visit friends.

Yes, there were a few fully veiled people on the street before, she says. "That was always an eye-catcher. But it never bothered me." But she thinks discussions about the headscarf ban are just "propaganda" — there really are more important issues to worry about, she says.

Denmark's parliament has passed a ban on wearing clothes in public that conceal the face. A number of European states have introduced similar legislation. DW takes a look at how other countries approach the issue. (01.06.2018)