Austria's new ban on covering the face was meant to target the burqa. But the law has had police responding to a Lego Ninja, a man dressed as a shark and even the parliamentary mascot. 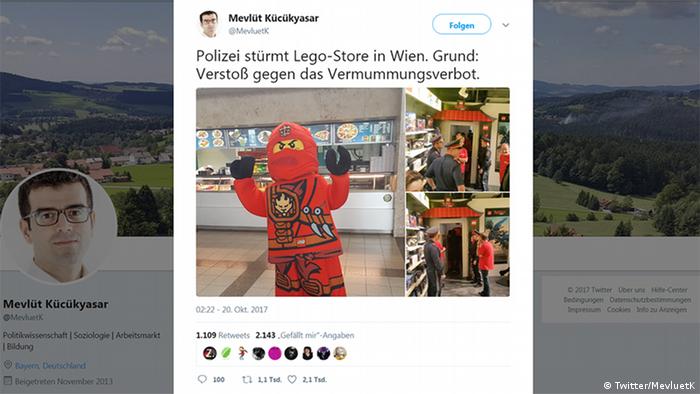 Austrian police raided a Lego store in the capital, Vienna, on Friday, in the latest bizarre case surrounding enforcement of new anti-burqa laws.

Police rushed to the toy store after receiving a complaint that a red Lego Ninja was violating a ban on wearing face coverings, leading to a "heated" argument,  Kronen Zeitung newspaper reported.

No fines were issued to the woman wearing the costume after she took off the head covering, the Vienna police said on Twitter, because the concealment of the face was within the scope of her "professional occupation."

The incident came nearly two weeks after police intervened against the Austrian parliament's mascot, Lesko. The long-eared rabbit was stopped from doing a video shoot with children during an open house ahead of the national independence day holiday. No fines were issued. 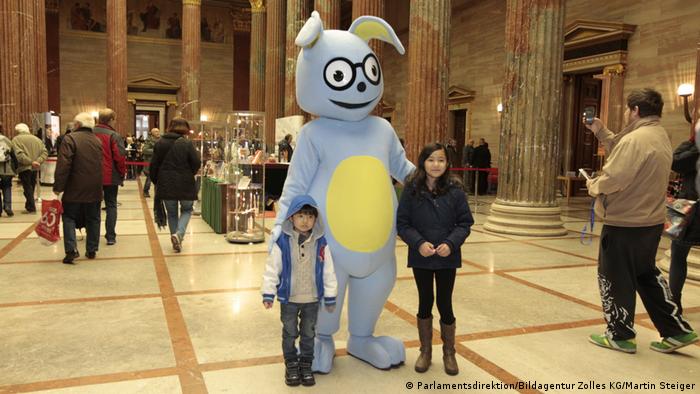 Austria's parliamentary mascot Lesko was targeted by police in the ban

After the scandal, the head of the Austrian police union, Hermann Greylinger told Austria's OE24 newspaper that he supported scrapping the new law. "It is unenforceable. The law was not written as a burqa ban for constitutional reasons and now this crap is happening," he said.

In another strange case, a man dressed as a shark to promote a new outlet of the McShark electronics store in Vienna was fined €150 ($176) after he refused to remove his shark head.

On October 11, a university student on her way home was stopped by police in Vienna and fined €50 because her scarf covered her face. German news weeklyFokus reported that police issued the fine because the 28-year-old argued about the law and found it "laughable," an account the student disputes.

Authorities suspect that some of the calls to police come from people trying to make a point about the new law.

In all, there have been more than 30 official police responses to enforce the face covering ban, according to Interior Minister Wolfgang Sobotka.

"The fuss is thus incomprehensible and more provocative," OE24  quoted him as saying.

Austria's new laws aimed at prohibiting people from covering their faces in public came into effect on October 1.

The rule came as part of legislation approved in May that also establishes mandatory integration courses and prompts asylum-seekers to do unpaid public work.

The laws were written in such a way as to be religiously neutral, but that has led to widespread confusion in the German-speaking nation. The law allows facial covering for professional reasons, medical reasons, to protect against the cold and for traditional occasions. 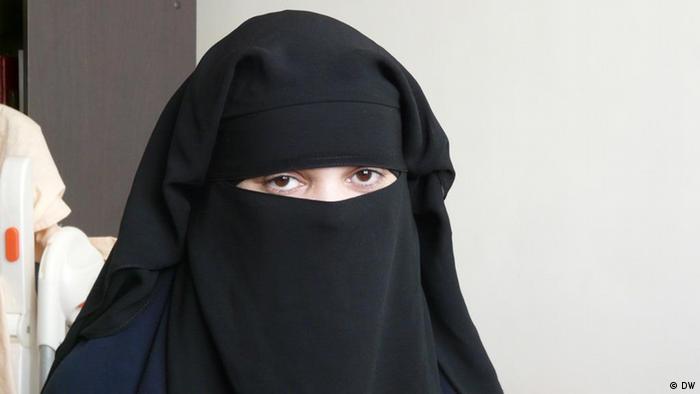 The new face covering prohibition targets the burqa, but was written in such a way as to not target religion

But there is no definition of cold, and as the shark suit incident showed, at least one person has been fined in a work-related capacity.

The exemption for traditional occasions has raised questions on what could happen on Halloween, which is not a traditional holiday in Austria but widely celebrated. Authorities have said that, nonetheless, Halloween will be treated as a traditional event, theKurier newspaper reported.

However, it is unclear what will happen if people dress up in a burqa on Halloween.

France was the first European country to outlaw face veils in 2011. Belgium, Bulgaria and Switzerland followed suit, while the Netherlands has prohibited the use of veils in public offices. Germany imposed a limited ban on face coverings in April. It applies only to public officials and soldiers on duty.

The European Court of Human Rights has upheld a Belgian ban on the public wearing of the full-face veil. The case was brought to the court by two Muslim women who said the ban violated their rights. (11.07.2017)

Danish parliamentarians will hold a formal vote to ban what they termed "masking" after the opposition party said it would support the measure. The country will be the latest European nation to pass such legislation. (06.10.2017)

Ethiopia: Army says it is in control of Tigray capital 45m ago