A man dressed as a shark has been fined under new anti-burqa laws in Austria. A PR agency has admitted the incident was a stunt designed to make a "socially relevant" point. 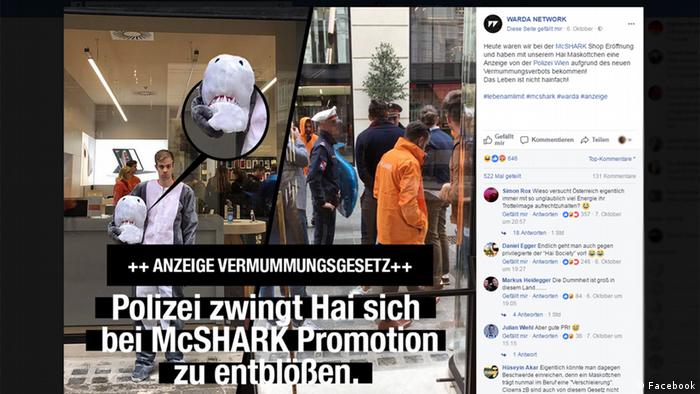 Austrian PR agency Warda Network has admitted it told one of its employees to dress as a shark to challenge the country's new anti-burqa laws.

Police had confronted a man on Friday after he was seen promoting a new outlet of the McShark electronics store in Vienna in a costume that covered his face. When he refused to remove his shark head, he was given a fine of €150 ($176).

Warda CEO Eugen Prosquill told Austrian networking website Leadersnet on Tuesday that the incident's coverage on social media and in international news outlets made it a strikingly successful PR stunt.

"We were able to create a massive echo with a relatively low budget," he said.

Warda revealed that Austrian police had fined its employee in a post on its Facebook page on Friday. But it did not say at the time whether it had contacted the police to raise suspicions about the shark mascot.

Regional daily Österreich reported the officers acted after a call from an unidentified member of the public. Police had suspected the report came from someone who wished to prove a point about the new laws.

But Prosquill refused to deny whether a Warda employee had called the police on Tuesday to instigate the coverage when asked about the call by Leadersnet.

Warda's creative director, Jakob Kattner, also implied that the company was behind the stunt, telling Leadersnet that Warda "wanted to bring attention to the absurdity of the current burqa-ban with the PR act and make a socially-relevant point."

On Wednesday, the company wrote on their official Facebook page that the story had generated 50 million clicks online at a cost of €150.

The latest European ban on burqas

Austria's new laws aimed at prohibiting people from covering their faces in public came into effect at the start of October. The rule came as part of legislation approved in May that also establishes mandatory integration courses and prompts asylum-seekers to do unpaid public work.

The laws were written in such a way to be religiously neutral, but that has led to widespread confusion in the German-speaking nation. Vienna daily Der Standard reported that in one case a cyclist was stopped by police for covering her face with a scarf.

Read more: The prospect of a burqa ban spreads across Europe

France was the first European country to outlaw face veils in 2011. Belgium, Bulgaria and Switzerland followed suit, while the Netherlands has prohibited the use of veils in public offices. Germany imposed a limited ban on face coverings in April.  It applies to only public officials and soldiers on duty.

Austria's prohibition of full-face coverings has officially come into force. The government said the ban helps uphold Austrian values and promotes integration despite criticism from Muslim and refugee groups. (01.10.2017)