The prospect of a burqa ban spreads across Europe | Europe| News and current affairs from around the continent | DW | 21.05.2010

In several European countries, measures against face-veils worn by some Muslim women are up for debate. The full-body burqa or the face-covering niqab are pushing many countries toward a ban. 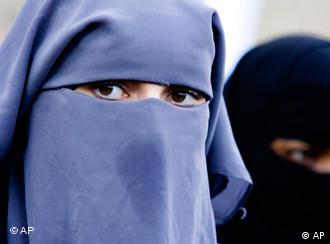 Belgium has made the furthest steps towards banning the burqa and the niqab. At the end of April, parliament agreed unanimously on a law that would forbid full veiling in public. But the law must still be approved by the Belgian senate, which is not seen as secure. Certain members of parliament have doubts about the constitutionality of such a ban.

On Wednesday, the French cabinet introduced a bill that would also ban face-covering in public. If parliament agrees on the measure, wearing a burqa or a niqab could carry a fine as early as the beginning of 2011. Veiled women would have to pay 150 euro ($188), according to press reports. Men who force women to wear veils could face a year in prison and a 15,000 euro fine.

Several bills banning face veils are being prepared simultaneously in the Netherlands, some addressing schools and the public service sector. Right-wing politician Geert Wilders is pushing especially hard for a ban on the veils. But Job Cohen, the Labour Party mayor of Amsterdam, is also calling for a measure that would take away unemployment payments for burqa-wearing woman who turn down job offers at a workplace that would require them to come to work unveiled.

Rules for the 'protection of the public order' have been on the books in Italy since 1975. This forbids head coverings in public facilities, whether it's a motor cycle helmet or a face veil. Italy's Equality Minister Mara Carfagna wants to write in an explicit ban on the burqa into this law. There are also four different bills from the governing coalition and the opposition for a ban of face veils, with penalties of up to two years in jail. There is also some resistance to these measures, for example from Foreign Minister Franco Frattini.

The Austrian far-right Alliance for the Future of Austria party intends to introduce a bill to parliament calling for a burqa ban. Social Democratic Chancellor Werner Faymann has already said he would support such a ban in principle. But his coalition partners, the Austrian People's Party, have called for a widespread debate on the issue.

A majority of the Danish population says it would support a burqa ban. The coalition partners in parliament are not quite as united in their stance on the issue, but agreed at the end of January to "fight against" face veils. The government would like to avoid a law because of constitutionality concerns from the justice ministry. But it has been agreed that schools, public sector institutions, and companies should take strict action against face veiling.

The country that passed a ban on the construction of minarets is also calling loudly for a ban on the burqa. But debate on the issue in the Swiss government has been put off as it sees no cause to discuss a ban at the moment.

A ban on face-veiling is not an official priority in Great Britain. The topic is being discussed on talk shows and in newspaper columns, but none of the three major political parties have taken up the cause. Only right-wing extremists are calling for a burqa ban in Britain.

Meanwhile, the European Council has voiced opposition to the burqa-ban ambitions of Belgium and France. Parliamentarians in the culture committee have spoken out against a general face-veil ban because it could run counter to the freedom of religion. The European Council's Human Rights Commissioner, Thomas Hammarberg, has warned that a burqa ban would only increase the tension between religious communities. Human rights conventions only allow controls on religious freedom in the interest of public safety or the preservation of democracy. Hammarberg says that is not the case in this situation.

What is it like to live as a woman who covers her face with a veil in Germany? A Deutsche Welle reporter tried it out for a day and reported on the reactions she received. (11.05.2010)