An unusual perspective: I wore a niqab for a day in a major German city | Culture| Arts, music and lifestyle reporting from Germany | DW | 11.05.2010

What is it like to live as a woman who covers her face with a veil in Germany? A Deutsche Welle reporter tried it out for a day and reported on the reactions she received. 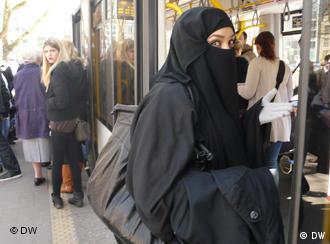 Chamselassil Ayari wore the niqab for an entire day

People jostle through the streets and the many stores. I glance into the window of a luxury shoe store not far from Cologne Cathedral. I see a glittering display of this summer's fashion shoes, from ballet flats and sandals through to strappy high heels and tennis shoes. Perhaps I should get a new pair of shoes before the start of summer. Not a bad idea. I might just find what I'm looking for.

It's very busy inside the store. Nearly all the customers are women. I see many faces. Some are smiling, others look rushed or stressed. The only face where you can't immediately gauge what mood the shopper is in is mine. A young sales assistant pushes through the crowd. She brings me three pairs of shoes to try on, the ones I asked her to bring. She helps me put on a pair of rather tight ballet flats. 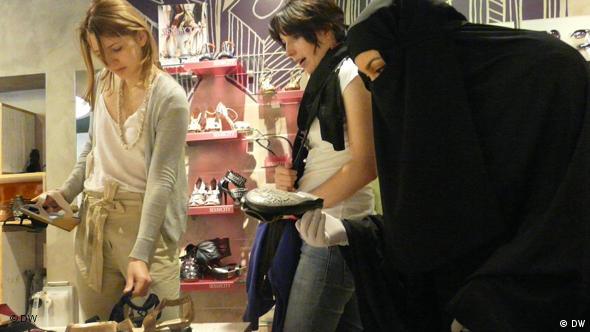 Buying shoes did not pose a problem but raised questions

She smiles, but looks a bit unsettled. That's hardly a surprise, because every time she wants to help me try on the new shoes she needs to lift my long gown to get to my feet. She looks at me and asks whether that's OK. All she can see is a pair of eyes surrounded by dark material. An unusual situation for her, no doubt.

"I see plenty of women wearing a veil. We are used to that," says the sales assistant later, when my colleague Hicham Driouich asks her how she felt. "Seeing women completely covered with a burqa, that's something completely different." Her nervousness disappears once she realizes that I speak German.

Everyone here thinks I am wearing a burqa. I am actually wearing a niqab. A niqab is a dark face veil with a small slit for the eyes, whereas the burqa has a net for the eyes as well and covers the face completely.

This is the first time in my life that I have ever worn anything like this and I definitely need to get used to it: a dark, full-length gown that completely covers my body.

My hair is covered with a long black scarf that goes down to my hips. A pair of pale gray gloves hide my hands and arms. I wear this outfit for an entire day while I go about doing all the usual things I do in Cologne. This is both a journalistic and a personal assignment. It is a completely different perspective on life. People perceive and look at me differently. 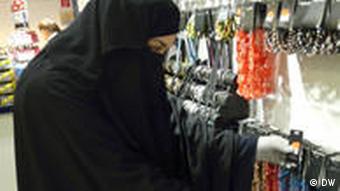 People wonder where I'm from

After buying my shoes, we go and sit in a cafe in the pedestrian zone. Sitting next to us is a group of five men and women. They are eating, drinking, talking and having a good time. Once they see me however, they suddenly go quiet. That's the impression I have, in any case. Or am I just imagining it? I suddenly feel a bit unsettled.

I definitely hear some whispering at the next table, however, as I try to drink my coffee without spilling anything or showing my face. But it does look a little amusing.

A woman, I put her at around 40 years old, smiles at me. Afterwards she tells us that she had never seen a woman wearing a veil in a German cafe or restaurant. She says it was unusual, but she also welcomed it, saying it reflected Cologne's multicultural makeup. "I was raised to accept others," she says.

The waitress more or less said the same thing. She thought that I was a tourist from one of the Gulf states.

"At first I thought, 'That looks strange and foreign!' But I myself travel to foreign countries and really want to visit Iran or Iraq one day," she says. Tolerance, curiosity, being open-minded: that's not just important when traveling. "Once I saw how hard it was for you to drink your coffee, I thought, 'Oh, that is much too complicated,'" she says.

Shopping at a cosmetics store also turns out to be rather tricky. I can't try out any lipstick or face creams. That's because in Germany, like all European nations, there are no separate rooms where women can remove their veils where men can't see them trying out makeup.

I can test perfume - on one of those test strips. Yet I can barely smell through the veil. A young store assistant notices this and gives me some friendly advice: "You can smell better without the veil," she says. 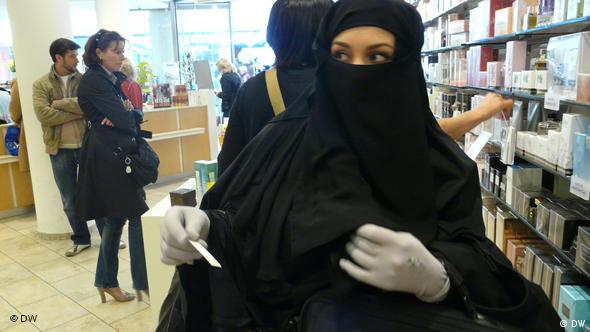 Later, she tells us, she can't quite understand why some Muslim women wear veils. "I always think, 'It must be so hot underneath for them! And I think it's such a pity, especially when they are really attractive. Why shouldn't they show their faces?"

A young man in his mid-30s joins our conversation. "I believe that those who live here should adapt to our ways!” he says. Religious and cultural differences need to be treated with respect, and that's not easy. "But when we travel to other countries, we are also expected to adapt to their ways."

A political, religious or security question?

In reality, one seldom sees a woman a wearing full-length gown like the niqab and burqa in Europe. The headscarf is much more common. Yet many of the current debates about Muslim garments focus on veils that cover the face. 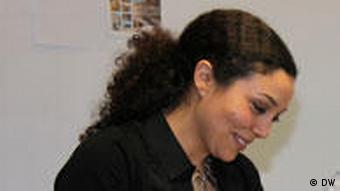 In France, lawmakers are preparing to pass legislation that would ban the wearing of the burqa in public. But there are far more controversial questions. For example, does wearing a face veil pose a security threat? Does it inhibit integration? Are face veils a symbol for female repression? Or is it the other way around - perhaps that we need to respect Muslim women and their choice of clothing as an expression of religious freedom?

Klaus, a student we meet on the street, puts it this way: "What's decisive is whether a woman wears the burqa voluntarily. If it is, then we should respect this. The main thing is that women are not forced to wear a veil."

The day is almost over and my experience as a woman wearing a veil is coming to an end. My colleague and I enter a subway station. I am exhausted, and take a seat next to a young woman. She immediately gets up and sits somewhere else.

I ask myself: Was she discriminating against me? Was she afraid? Or did she want to get up in any case and hadn't even noticed me? I can't find out, but for a while I feel quite uncomfortable - and for a short moment, lonely. Later, when I get on the tram, the seat next to me remains empty. Is this just a coincidence? I can't say.

Belgian burqa ban pleases most, but not all readers

A new draft law passed by the lower house of parliament in Belgium to ban the burqa could be the first of its kind in the EU. Readers reacted both positively and negatively to the news. (03.05.2010)