A fraternity songbook has sparked outrage in Austria after it was found to contain lyrics praising the Holocaust. The fraternity's deputy chair and far-right candidate Udo Landbauer is now facing heavy criticism. 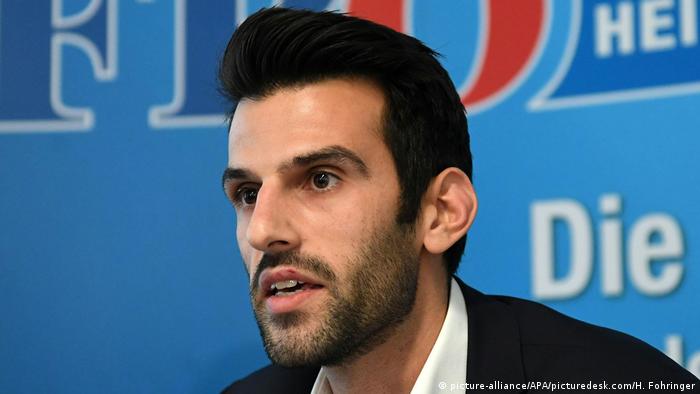 A report about a Nazi-praising fraternity songbook prompted swift condemnation across Austria's political spectrum on Tuesday and put populist Freedom Party of Austria (FPÖ) candidate and fraternity member Udo Landbauer on the defense.

According to a report from Austrian weekly magazine Falter, a songbook used by the fraternity "Germania zu Wiener Neustadt" contains several songs that celebrate Nazi atrocities and use anti-Semitic, racist language.

Landbauer is the deputy co-chair of the fraternity that published and used the songbook, reported Falter. He is also one of the FPÖ's top candidates running in this Sunday's state election in Lower Austria.

According to the magazine, one of the songs in the book contains the lyrics: "In their midst comes the Jew Ben-Gurion: 'Step on the gas, you ancient Germanic peoples, we'll manage the seventh million."

An estimated six million Jews were killed in the Holocaust, many of whom died in gas chambers in Nazi concentration camps. David Ben-Gurion was the first prime minister of Israel.

The song continues with the lyrics: "Then a slanted-eyed Chinese entered their midst: 'We too are Indo-Germans and we want to join the Waffen-SS.'"

Falter reported that other songs in the book praise the Condor Legion, which was responsible for the bombing of Guernica during the Spanish Civil War. Nazi paratroopers who carried out atrocities on the island of Crete in 1941 were also celebrated.

A spokesman for Landbauer confirmed to Falter that the FPÖ politician has been a member of the fraternity of the past 18 years but that he only used the songbook "only with torn-out pages and blacked out passages."

Landbauer said in a statement that he was "shocked" by the texts of the songs and said he froze his membership with the fraternity.

"When this book was printed [in 1997] I was 11 years old," he said, adding that "neither I nor the FPÖ have anything to do with anti-Semitism, xenophobia or totalitarianism."

Austrian Chancellor Sebastian Kurz condemned the songbook, writing on Twitter that the lyrics were "racist, anti-Semitic and absolutely repugnant" and that "there cannot be a place for that in our country."

He added that there should be an investigation into the matter and that "those responsible must be brought to justice."

Bernhard Ebner, the head of Kurz's center-right People's Party (ÖVP) in Lower Austria said the allegations in the report were "unbelievably serious."

Politicians with the center-left Social Democrats (SPÖ) urged Landbauer to resign immediately should the claims about the songs' lyrics prove to be true.

The ÖVP entered a governing coalition with the FPÖ in December, who were granted the foreign, interior and defense ministries.

The FPÖ was formed by former Nazis in the 1950s, but the party has sought to distance itself from anti-Semitism. In the past, Kurz has defended his governing coalition with the FPÖ, saying that the party should be judged on its current actions, not its past actions.

A different lapel flower worn by the far-right at the opening of Austria’s new parliament hasn't gone unnoticed. FPÖ members wore edelweiss while denying that their past displays of blue cornflowers had Nazi overtones. (09.11.2017)