In the wake of the drowning of several hundred asylum seekers in the Mediterranean, Australian PM Tony Abbott has advised European politicians to follow Canberra's refugee policy. Would it be a wise move? DW examines. 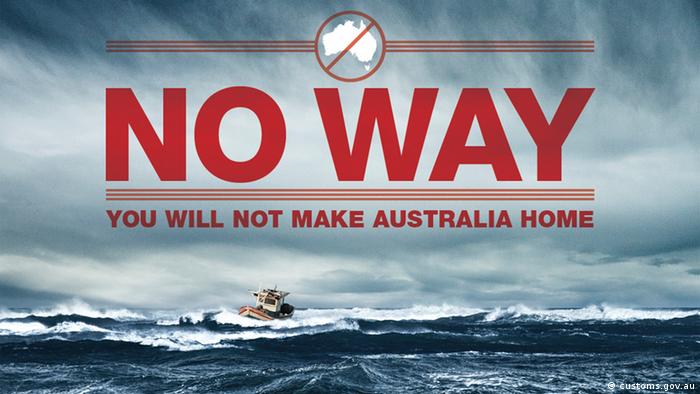 Stop the refugee boats at sea and you will be rid of your problems - Australian Prime Minister Tony Abbott believes this could be the formula for a successful refugee policy in Europe.

Talking to Australian TV station ABC after a fishing vessel crammed with migrants capsized off the Libya coast at the weekend - claiming at least 800 lives - Abbott said: "The only way you can stop the deaths is, in fact, to stop the boats."

It is a strategy that the conservative politician has been pursuing since coming to power in 2103. "Stop the boats" was one of his popular slogans during the election campaign, which led his Liberal Party of Australia to victory in the parliamentary elections. Shortly after taking office, PM Abbott introduced his government's "Operation Sovereign Borders" plan. 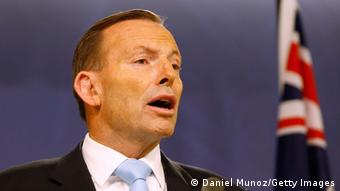 Abbott: 'The only way you can stop the deaths is, in fact, to stop the boats'

Asylum process on the high seas

This means that refugee boats are usually intercepted at sea in advance far off the Australian shore, and forced to turn back. An incident in July, 2014 caused a great stir: The Australian Coast Guard stopped a vessel on high seas hundreds of kilometers away from the Australian coast. There were some 41 people from Sri Lanka on the boat. After processing their asylum requests via video conference, the Australian authorities rejected all applications and handed them over to the Sri Lankan navy.

The UN has expressed concern over increased people smuggling in the Mediterranean following a deadly weekend shipwreck. Ahead of an EU summit, Chancellor Merkel has said simply blocking migrants is not the solution. (22.04.2015)

However, Peter Dutton, minister for Immigration and Border Protection, has emphasized how successful his country's immigration policy has proven to be. He argues that for the past 17 months no refugee boat has reached the Australian shore and no deaths at sea en route to Australia have been reported either.

But even the refugees who are not sent back right away don't stand a chance of coming to Australia. Instead, the government detains them in refugee camps on Christmas Islands, the Pacific island nation of Nauru or Papua New Guinea, where they wait while their applications are processed.

If, by any chance, their applications are approved, the refugees are to remain on these islands. They do not face any kind of persecution there, as Abbott once told the Sydney Morning Herald newspaper.

Asylum seekers coming to Australia are also being diverted to Cambodia. According to a bilateral deal between Australia and Cambodia last year, Australia has to pay resettlement costs and an additional $35 million to the South East Asian nation over four years.

Amnesty International called the deal a "new low in Australia's deplorable and inhumane treatment of asylum seekers." It said the country's politicians were "putting the short-term political interests of the Australian government ahead of the protection of some of the world's most vulnerable people." 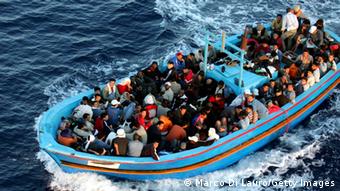 Tens of thousands of immigrants land on the Italian coast each year, most of them coming from North Africa on ramshackle boats

"Cambodia is a safe country where police maintains law and order," states a document distributed among the refugees by Australian officials. But the rights activists disagree. They say that corruption, human rights violations and human trafficking are common in impoverished Cambodia, and the Southeast Asian country cannot deal with the extra burden of the refugees.

'Not a good model' for the EU

Jane McAdam, an international refugee law expert at the University of New South Wales, says the Australian model is flawed and is not applicable to the EU. "Australia is not part of any regional human rights system, and some of what it is doing would be ruled illegal under the European Convention on Human Rights," she told AFP.

The Australian policy is "impractical, cruel and inhumane," Human Rights Watch's Australia director Elaine Pearson added. "It may be effective in diverting the problem onto other countries but it fails to address the fact that people need to flee persecution and go somewhere."