A united campaign by Australian media organizations is calling for the government to better protect press freedoms. The move follows a spate of raids on a public broadcaster's office and a reporter's home in June. 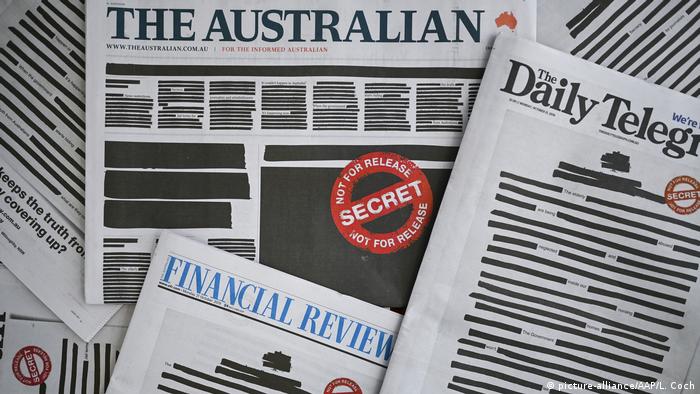 Newspapers around Australia have published blacked out front pages in a unified campaign to highlight the way the conservative government falls short in protecting freedom of the press.

The Sydney Morning Herald called for "significant law reform to stop the suppression of information," and The Australian newspaper spoke of a "sustained attack on the rights of journalists."

Nineteen media organizations and journalist unions, some of them traditionally rivals, banded together for the "Your Right To Know" campaign.

The campaign was sparked by an incident in June, when federal police raided a public broadcaster's office and a reporter's home in their search for leaked government documents.

A former army lawyer was charged over the leaks, and a number of journalists could also be charged.

The campaign is calling for six legal changes, such as a system that limits which documents can be labeled "secret" and the right to contest a search warrant.

'What are they trying to hide?'

The coalition of media organizations said over 60 pieces of legislation have been established over the past 20 years that tighten the freedoms of journalists to do their jobs and penalize whistleblowing.

"Australia is at risk of becoming the world's most secretive democracy," David Anderson, managing director of national broadcaster ABC, said in a statement.

Michael Miller, the executive chairman of News Corp Australasia, tweeted, "Australians should ask: 'What are they trying to hide from me?'"

Some examples of government secrecy, according to the campaign's website, include the government's refusal to disclose which care homes have track records of elder abuse, that the government has plans to undertake secret surveillance of its citizens, and that Australian land is being sold to foreign powers.

Numerous journalists have been charged with revealing state secrets and questioned by France's intelligence services. French media fear that press freedom is at risk under President Emmanuel Macron. (25.06.2019)

In Mexico, criminals do not fear the authorities, but journalists. That’s why journalists are the target of attacks, with eight dying so far this year. Protecting them is an international duty, says Anabel Hernandez (04.08.2019)