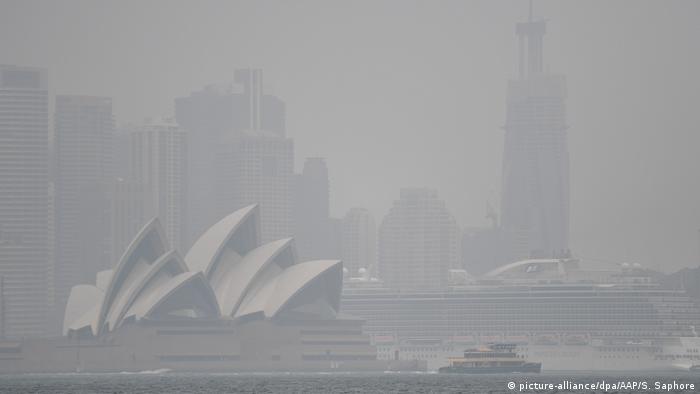 Australia's government hopes to boost its tourism industry with tens of millions of dollars in a bid to combat the damage to infrastructure and the country's image caused by devastating bushfires.

Prime Minister Scott Morrison, who faced criticism for taking a holiday to Hawaii as the wildfire crisis unfolded, announced the stimulus package of AU$76 million ($52.3 million, €47.1 million) in a statement on Sunday.

The initial injection of tourism aid will be taken from an AU$2 billion National Bushfire Recovery Fund, said the prime minister, adding that "this is make-or-break for many businesses and tourist hot spots."

It is estimated that the impact of the Australian bushfires on the nation's tourism sector will be at least AU$4.5 billion by the end of the year, Sydney-based Australian Tourism Export Council (ATEC), the main body representing Australia's tourism sector, said on Friday.

Tourism is a major part of Australia's economy accounting for 3% of annual economic output.

Where will the money go?

Morrison said the fund "is about getting more visitors to help keep local businesses alive and protect local jobs right across the country and especially in those areas so directly devastated."

However, Morrison also stressed that the funds are not just for areas directly affected by the bushfires.

The stimulus package includes money for both domestic and global marketing campaigns, as well as the promotion of regional tourism events across bushfire-affected areas.

Is it enough of an investment?

Tourism is an important part of the Australian economy — one in 13 jobs rely on the tourism or hospitality industries.

There are likely to be further stimulus packages in the future. Asked on Australia's ABC News television on Sunday whether AU$76 million is sufficient, Tourism Minister Simon Birmingham said it was an initial package.

"There may need to be additional support and funding as we work through this recovery," Birmingham said, according to a transcript of the interview.

Opinion: The climate crisis – sport is both victim and sinner

At the Australian Open, a player struggles to breathe because of air pollution while Greta Thunberg challenges Roger Federer. Sport must face up to its responsibilities with regards to the climate, writes Joscha Weber. (14.01.2020)

Millions of viewers from Germany watched the season launch of "Dschungelcamp," a reality contest filmed near Brisbane, as bushfires raged in Australia's southeast. This time, contestants can't use fire or candles. (11.01.2020)