Australia and the UK have signed a free trade deal as Britain seeks to find alternative markets in the wake of Brexit. The deal was hailed by British Prime Minister Boris Johnson as "a new dawn" in relations. 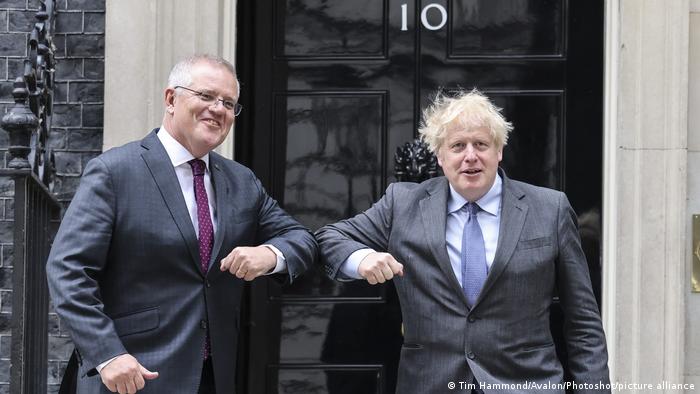 The United Kingdom and Australia agreed to a free trade deal on Tuesday following talks between their respective premiers.

Australia's prime minister, Scott Morrison, and his British counterpart, Boris Johnson, ironed out their differences during bilateral talks at a Group of Seven (G7) meeting.

The deal was announced by Australian Minister for Trade Dan Tehan. "Their agreement is a win for jobs, businesses, free trade — and highlights what two liberal democracies can achieve while working together," said Tehan.

The minister added that the countries would make a formal announcement on Tuesday in London.

"Today marks a new dawn in the UK's relationship with Australia, underpinned by our shared history and common values," Prime Minister Johnson said in a statement.

The details of the trade deal weren't revealed, but some estimates say the agreement could add over $700 million (€576 million) to British economic output over the long term.

However, some analysts questioned the importance of the agreement for an Asia-focused economy like Australia.

The specifics of the deal with be scrutinized by British farmers, who fear they could be forced out of business if the deal scraps tariffs on lamb and beef from Australia.

A free trade deal with Australia was a top priority for the UK following Brexit, but negotiations had dragged on for months. The UK has already struck free trade deals with countries in the European Economic Area, such as Norway and Iceland.

David Littleproud, Australia's agriculture minister, called the deal an "in-principle agreement." Littleproud said that the details of the deal were being "nutted out."

"Our departments and the Trade Department are working through feverishly to make sure that an announcement can be made at our time tonight so that Australians will see exactly what is in that in-principle agreement," said Littleproud.

The European Council has approved the UK′s fishing opportunities and deep-sea stocks for 2020 and 2021 as part of the EU-UK Trade and Cooperation Agreement.