Asparagus craze in Germany during the coronavirus crisis

As spring blooms in Germany, locals excitedly count the days until they can eat their favorite vegetable: asparagus. Turns out not even a pandemic can dampen desire for the white stalks, as DW's Meet the Germans learned. 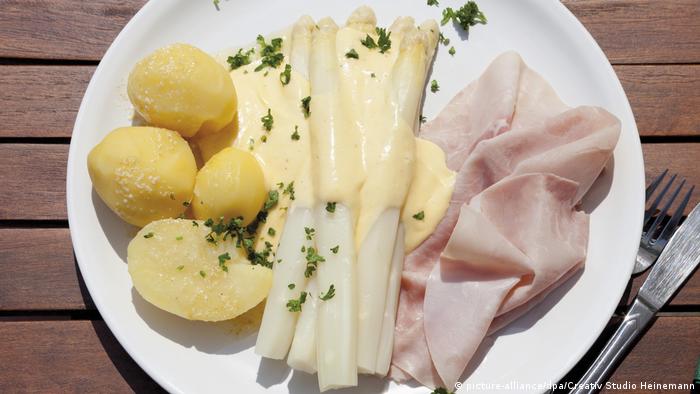 Daydreams in Germany these days are often filled with white asparagus stalks — plain, with ham, with butter, with hollandaise sauce, pan-fried, boiled, baked. Each preparation offers its own pleasures, and many Germans swear by their own tried-and-true recipe.

They also know not to buy asparagus without first performing the definitive "squeak test." It's the sound of asparagus that confirms freshness; if you rub two fresh stalks together, they squeak!

Once home, if the stalks don't go straight into the cooking pot. they should be wrapped in a damp kitchen towel and placed in the fridge in the crisper, where they'll keep for two to three days.

Do without asparagus? No way!

This year, with coronavirus raging around the world and movement restrictions in place, many Germans were worried that there would not be enough field workers to harvest the crop — around 300,000 seasonal laborers come from Eastern Europe annually to get the job done.

"The asparagus harvest is at stake!" wrote one of Germany's major tabloids in mid-March. Amidst the chaos of life in times of coronavirus, would Germans not be able to at least take comfort in their favorite spring delicacy?

The German government eventually decided to allow up to 40,000 seasonal workers to enter the country in both May and June, despite travel restrictions.

Asparagus farmer Peter Wermes, whose farm in Cologne DW's Rachel Stewart visited last year for the "Meet the Germans" series, is glad to say his situation never looked that dire: "I am in the fortunate position that the 15 seasonal workers I always employ from Poland and Romania arrived here early, at the end of March. I am very grateful; I have enough people to harvest my fields."

Normally most of Wermes' harvest is bought by restaurants. However, the coronavirus forced dine-in establishments to close their doors for weeks. "Some offered takeaway food, including asparagus dishes, but they didn't buy much," he said.

However direct sales to customers in his farm shop has helped even out the balance sheet. "At first, I was very skeptical whether in times of crisis, people would even be interested in such a relatively high-quality product," he said. 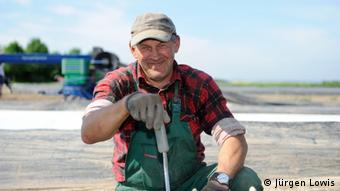 White or green? An easy question for Germans

But Wermes says it stands to reason that people have been willing to shell out for the vegetable: "They couldn't travel anywhere, couldn't go out, had more time, spent more time cooking meals — so there has been plenty of demand for asparagus."

The demand is not color-blind, however. "The Germans are special because they prefer white asparagus; the green variety has no more than a 10% market share here," Wermes said.

As for what's at the root of Germany's asparagus obsession, Wermes believes it's all about the onset of spring.

"Asparagus is the first spring vegetable, nature is awakening, trees are green and budding. People crave what is fresh, and asparagus happens to be available very early," he explained.

But for many Germans, asparagus season ends all too soon — on June 24, or the feast day of Saint John the Baptist (Johannestag), to be precise. The plants and the soil must have time to recover to ensure a plentiful harvest the following year. So Germans can still enjoy asparagus dishes for another month — even with coronavirus.

Peter Wermes, 50, started growing asparagus in 1996 on the Wermes Asparagus and Strawberry Farm in Zündorf, a district on the outskirts of in the city of Cologne.

German idioms involving salt: The soup is too salty; you must be in love

Once known as "white gold," salt is an essential element of life. No wonder it's trickled into language and German idioms. Oversalting, for instance, is seen as a sign that you're in love... (11.03.2020)

Don't be fooled by marketing labels! "Superfood" is just another buzzword to boost product sales and prices. But since Germans are going chia, here are a few regional products we should be eating more of. (15.01.2020)

From stiff ears to cups of tea and the light at the end of the proverbial tunnel, Germans use vivid idioms of encouragement in times of the COVID-19 pandemic. (27.03.2020)