The German town that lives and breathes asparagus | Business | Economy and finance news from a German perspective | DW | 31.05.2019

The German town that lives and breathes asparagus

The German town of Beelitz is known for one thing and one thing only: asparagus. DW's Kate Ferguson embarks on a quest to find out how the vegetable acquired its cult status.

When Carl Herrmann scattered asparagus seeds across his land in 1861, he could not have known that more than a century later he would be immortalized in bronze and credited with forging the cultural and economic identity of Beelitz, a small town an hour's drive outside of Berlin.

Not much is known about what inspired the act. Perhaps the simple farmer was interested in acquiring the taste of the Prussian ruling classes. Even then, the vegetable had an elitist reputation.

To the uninitiated, asparagus is a rather bland stick-shaped specimen that comes in three colors: purple, green and white. It is OK as a side but generally shouldn't be the main event. If you have the courage or foolishness to say this to a German, you will probably be branded a heretic. It's better to stay silent.

I first became interested in the vegetable when I moved to Berlin in 2012. After enduring one of those long, bleak winters the city is so well known for, springtime brought some surprises. From mid-April, stalls selling Beelitz asparagus began popping up across the German capital. Restaurant chalkboards advertised the same doused in hollandaise sauce. Even off-licenses used their window displays to recommend the best wines to pair with the not-so-humble legume.

These events marked the beginning of asparagus season and with them my passion for weird small-town German traditions was reawakened from its winter slumber. Wandering around Berlin in a state of bemused confusion makes up the first chapter in my quest to uncover the story of Beelitz asparagus. 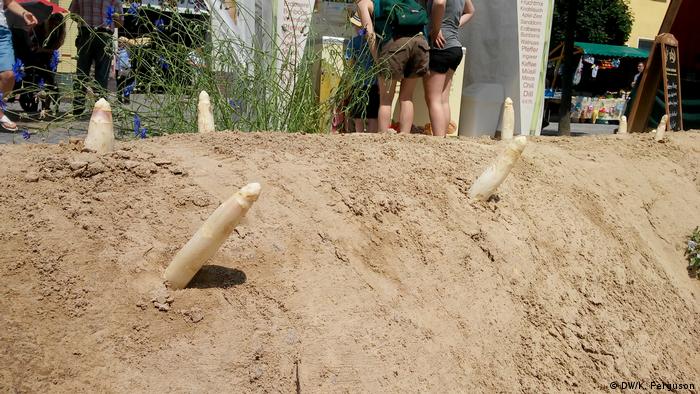 In Germany, it's the white asparagus that makes people swoon

Here's the thing. Everyone's heard of Cheddar cheese and Brussels sprouts and if you're hip enough, New York cheese cake. These regionally inspired items can be found on menus all over the world. Beelitz asparagus is different. Its celebrity is profound, yet very local. Its name is unknown outside of Germany and yet — as of last year — considered important enough to be protected by the European Union.

So, what is behind this remarkable blend of carefully contained self-promotion? The answer is a branding operation so intricately tied up with the events of German history that its brilliance — conscious or unconscious — manages to escape our notice.

Let us return to Carl Herrmann, the man who cast the first asparagus seeds into the ground in Beelitz. The loose sandy earth of the area proved ideal for the crop, and it wasn't long before he was selling his produce at the local market. Inspired by his success, subsequent generations followed suit and by 1927, some 450 hectares (1,112 acres) in Beelitz had been devoted to asparagus.

Word spread to the capital and soon trucks from Berlin were arriving to transport the vegetable to the city's market halls. Meeting the ever-increasing demand proved challenging though, and seasonal workers were brought in to help. In 1934, the town of Beelitz organized a festival to honor them. Locals constructed a huge wedding cake-like pyramid out of asparagus and paraded it through the town. The stick-shaped vegetable had begun its ascent to stardom.

But then German history took its darkest turn. During World War II, the people of Beelitz were no longer allowed to grow asparagus. The rationale was that it contained too few calories to warrant the effort, a fact that is all the more notable now given how enthusiastically the vegetable is marketed toward those who are watching their weight.

After the Second World War, asparagus enjoyed a brief renaissance before it was once again suppressed by the authorities. Beelitz became part of Communist-ruled East Germany and so its farmers were subjected to the dictates of collectivization. Once again, asparagus was not considered a priority. Perhaps its elitist reputation made it all the more distasteful to the ruling powers.

Unsurprisingly, there was a resistance of sorts. Individuals continued to grow it on the sly and because of its scarcity, its value grew. In Berlin, the so-called white gold of Beelitz became an unofficial currency. During times of shortages, it was traded for car parts and clothing.

After reunification, West German farmers arrived in Beelitz with the kind of modern farming technology that had been unavailable in the East. Together with the locals, they revived the tradition. By 1991, the vegetable was once again being sold at the local market.

In the years that followed, workers from Eastern Europe returned to help harvest and the town reinstated its festival. It features an asparagus-themed parade and a dance by a local troupe known as the "asparagus ladies." 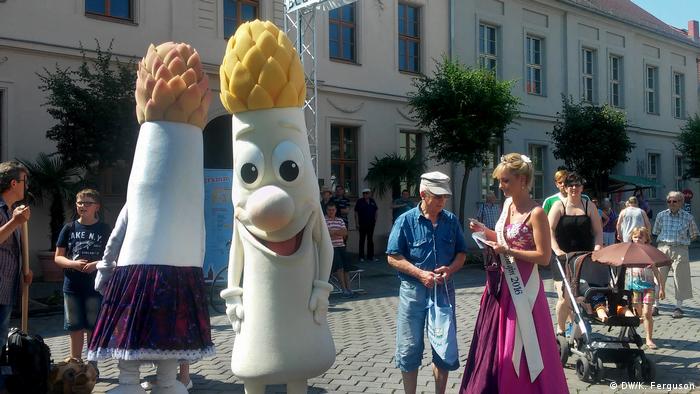 The asparagus queen being escorted by the white gold of Beelitz

Since 1997, the Beelitz Asparagus Committee has been responsible for appointing an asparagus queen. According to the town's website, she is responsible for representing both Beelitz and its most noble vegetable. Her duties include digging up the season's first asparagus and leading the parade that takes place in its honor. It is traditional for her to be a local of the town and to have harvesting experience.

This year's monarch is no exception. The chance to curtsey before her is only one of the reasons you can bet your best bunch of asparagus that I'll be at the festival this weekend.

To an outsider like me, the story of Beelitz asparagus is delightfully bizarre. But for locals, the sight of the stick-like vegetable poking out from beneath the earth is also a reminder of their town's bleakest and brightest times. Perhaps this is why its celebrity has remained so steadfast and yet so locally confined.

When Carl Herrmann scattered those seeds in 1861, he planted more than anyone could have bargained for.

Where asparagus is king

In Germany, the willingness to pay for peace of mind dates back more than a century. But are today's insurance companies equipped to allay the nation's biggest fears? DW's Kate Ferguson takes a closer look. (29.03.2019)

How to know if you're really a socialist

If you were held at gunpoint and asked whether you were a socialist, would you answer yes or no? Following a visit to Cuba, DW columnist Kate Ferguson shares her thoughts on the issue with us. (26.04.2019)

In some parts of Germany, restaurants can again open for business. Is it the beginning of normality?

Conditions are set to improve in Germany’s abattoirs after several COVID-19 outbreaks shone a spotlight on the exploitation of mostly eastern European workers. Other sectors need change too, says Grzegorz Szymanowski.

Angela Merkel's conservatives have suffered their worst postwar result. The center-left Social Democrats now lead, preliminary results show. Both parties say they are ready to form the next coalition.