Once known as "white gold," salt is essential to life. No wonder it's trickled into German idioms. And oversalting is seen as a sign that you're in love...

Nowadays, it often gets a bad rap as a health risk from overuse in processed foods. But formerly, natural salt was considered a precious commodity — so much so, that it was dubbed "white gold" as it played a central role in the development of the environment and human civilization.

Before the invention of refrigeration, it was used to preserve meat, fish and vegetables, which ensured there was enough to eat over a long winter. Adventurers could likewise set out on longer journeys with sufficient provisions in their packs. It was traded for goods and services; roads were built for its transport.

In Europe, the Celts and the Romans valued it highly, with the latter having paid its soldiers enough wages to buy salt, or paid them in salt cakes, hence the origin of the English word "salary," from the Latin "salarium," with the "sal" root meaning "salt."

Read more: A 'German superfood' for every month of the year 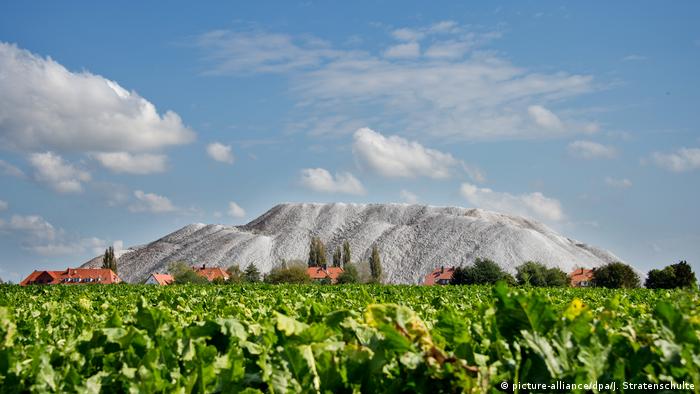 Many uses for salt

With modern mining methods, it's possible to extract and process it from underground deposits or from rock. But for centuries, and still today, people have also harvested it from seawater, channeling the water into small ponds that evaporate and leave behind salt crystals that harden in the sun. This method gives rise to the precious Fleur de Sel.

While adding tangy flavor to food, as well as being used for a wide variety of industrial purposes, such as cleaning, it is still praised for its medicinal value. Gargling with salt water soothes a sore throat; it is also used in therapies to alleviate respiratory or skin problems. And, of course, it's also essential for our bodies to survive.

Given its importance, it's no wonder that salt has trickled down into language.

Click through the gallery above to view some of the German idioms involving salt.

Mahlzeit! All about German food and eating habits

You'll find more from Meet the Germans on YouTube, on Instagram or at dw.com/MeettheGermans, and check out DW's cartoon series That's so German for a humorous take on German culture and stereotypes.

German idioms: What people mean when they make nails with heads, or shout about showing you where the hammer hangs. Don't expect a visit to their workshop! (27.11.2019)

What do pigs have to do with luck and zebras with crossing the road? Kate Müser gets to the bottom of funny German animal expressions on Meet the Germans. (28.02.2018)

Shake that sleeve: German idioms with items of clothing

Items of clothing feature in many popular German idioms. Find out more about exploding shirt collars and what Germans mean when they say "it's coat or pants to me." (04.09.2019)

From head to toe — quirky German idioms based on body parts

Idioms based on body parts are popular in both English and German, but they aren't identical. In Germany, stones drop from hearts and some people live on big feet. (23.01.2019)

Too much salt in your food? You must be in love. German has a whole array of idioms revolving around salt. Click through the gallery to learn some! (11.03.2020)

Fired? Grab your hat. While hats and caps are no longer part of people's everyday wardrobe, Germans use idioms involving hats all the time.

Sunlight and being outdoors usually give us a real boost. We look at German idioms using the word "sun."

The German language has all sorts of creative phrases related to size. Learn some here to make a sizeable impression on your friends!