The Association of South East Asian Nations (ASEAN) concluded a series of meetings in Phnom Penh this week, failing to issue a joint communiqué amid disagreements over a maritime dispute in the region.

Foreign ministers of the 10-member ASEAN bloc held tense talks on contested waters in the South China Sea, which has important shipping lanes, and is believed to be rich in oil and gas reserves.

China and Taiwan, along with ASEAN member states Vietnam, Malaysia, the Philippines and Brunei, all claim territory in the area, which has become the scene of rising tensions in recent months. 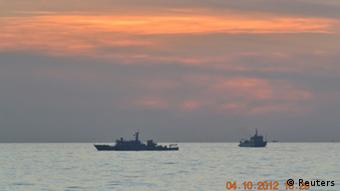 Cambodia opposed mentioning the Scarborough Shoal in the communiqué

The Philippines said in a statement on Friday that the non-issuance of a joint communiqué was "unprecedented" in ASEAN's 45-year history.

It said that during a special morning meeting, several ASEAN states and the ASEAN Secretariat supported the Philippine's view that discussions on the Scarborough Shoal - the site of a recent standoff between China and the Philippines - should be mentioned in the communiqué.

"… the Chair (Cambodia) has consistently opposed any mention of the Scarborough Shoal … in the Joint Communiqué and today announced that a Joint Communiqué cannot be issued," the statement read.

The Philippines' Foreign Secretary Albert del Rosario said at meetings on Thursday - attended by visiting US Secretary of State Hillary Clinton and Chinese Foreign Minister Yang Jiechi - that China's "increasing assertion" in the area could threaten regional peace and stability.

"If left unchecked, the increasing tensions that is being generated in the process could further escalate into physical hostilities which no one wants," said del Rosario.

Cambodian Foreign Minister Hor Namhong said at a press conference that the communiqué had become a "hostage" of bilateral issues between ASEAN member states and China.

Carlyle Thayer, a professor at the University of New South Wales at the Australian Defense Force Academy, told DW that Cambodia's actions as ASEAN chair were "reprehensible" and its "act of obstinacy" was a reflection of China's influence.

"For the first time in ASEAN's history, its foreign ministers have met and acted on a very heavy agenda but have lost their traditional means of publicizing their decisions," he said, adding that discord over the wording of the joint statement could spill into negotiations for a code of conduct (COC) on the South China Sea.

Indonesian Foreign Minister Marty Natalegawa told reporters on Friday that he felt "deep, profound disappointment" that a consensus could not be reached among ASEAN members. However, he added that states would continue to work on a draft COC. 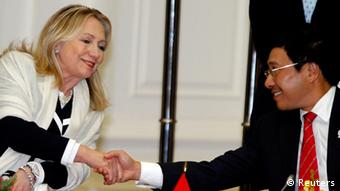 North Korea accused the US of destabilizing the region

ASEAN and China agreed in 2002 to work toward the adoption of such a code to guide behavior in the South China Sea.

"There is still a common view that we must, if anything, reinforce our efforts to work on the COC, to begin our talks with the Chinese on the COC," Natalegawa said.

Earlier this week, a senior Cambodian official stated that foreign ministers had adopted "key elements" of a draft COC, and must start discussions with China.

Hillary Clinton told reporters at a briefing on Thursday that the US looked to ASEAN and China for "meaningful progress" on finalizing a COC.

"We believe the nations of the region should work collaboratively and diplomatically to resolve disputes without coercion, without intimidation, without threats and certainly without the use of force," she said.

US 'root of instability'

Meanwhile, North Korean Foreign Minister Pak Ui-chun told an ASEAN gathering on Thursday that the US nuclear threat and US policy was the "root of instability" in the Korean Peninsula.

Clinton said in her remarks at the East Asia Summit on Thursday that all parties must remain "firm and unified" in pursuing the denuclearization of the Peninsula, following "provocations" from North Korea over the past year.

US Secretary of State Hillary Clinton has declared close relations with the Association of South East Asian Nations (ASEAN) are a 'central pillar' of the US' renewed foreign policy push in the Asia-Pacific region. (12.07.2012)

A meeting of southeast Asian diplomats ended in acrimony over competing territorial claims in the South China Sea. Diplomats could not even agree on a joint communiqué at the end of negotiations. (13.07.2012)

One of the main issues discussed at ASEAN meetings has been conflict in the South China Sea. Foreign policy expert Eberhard Sandschneider talks about the current situation surrounding the disputes. (12.07.2012)