Power politics equal conflict in Southeast Asia | Asia| An in-depth look at news from across the continent | DW | 12.07.2012

One of the main issues discussed at ASEAN meetings has been conflict in the South China Sea. Foreign policy expert Eberhard Sandschneider talks about the current situation surrounding the disputes.

Dr. Eberhard Sandschneider has been the Otto Wolff Director of the German Council on Foreign Relations' (DGAP) Research Institute since August 2003. His areas of expertise include German foreign policy, transatlantic relations and international relations in the Asia-Pacific.

DW: Beijing claims ownership of the disputed Scarborough Reef in the South China Sea, accusing the Philippines of provoking the dispute. On the Western side, China is also locked in a brawl over the Spratly Islands and Paracel Islands. How would an international court view these territorial disputes?

Professor Eberhard Sandschneider: The disputes haven't landed in the courts yet. But the nations in the South China Sea don't appear willing to put their differences aside, judging by their one-sided action and symbolic politics. Ultimately, this creates a potential for conflict, which the international media hasn't fully grasped - and which could escalate in the coming years. The South China Sea is one of the most conflict-prone regions in current world affairs.

How can China and the other countries find an amicable solution? 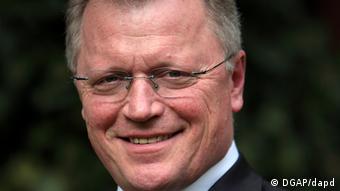 "Can" is not the question. In principle, there's an easy answer: The countries need to sit down at the negotiating table and find a common solution. Of course, this sounds overly idealistic. But the fact is that power politics have already led to military intervention. The overall situation is explosive.

China declines multilateral negotiations with ASEAN. The country claims ASEAN is not the right platform to discuss such disputes. It seeks bilateral agreements with the concerned nations. How do you see the situation?

Naturally, China wants to avoid bodies that could also take a critical stance on its policy. From a bilateral perspective, China always has the longer end of the stick - it's a huge, influential power not only because of its size but also because of its economy and military capability. So it's completely understandable that China would want to avoid multilateral approaches.

The Philippines are actively seeking military support from the US. What role does the US play in the South China Sea?

I think the US will refrain from taking any military intervention in the current situation due to its numerous conflicts with China at different levels. Washington will likely want to have a "dampening" function. Anything else would be extremely foolish for the Americans and actually dangerous for the development of the situation in the region. It is certainly not in the interest of the US to be pulled militarily into this conflict.

For years, the Chinese have pursued a friendly dialog with its neighboring countries. So how is a trustful relationship with ASEAN states possible? 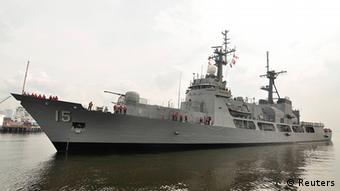 It's not just that each of the ASEAN members is in a clinch with China; there's also potential for disputes among the members themselves. So whenever a situation arises such as the one we're observing in the South China Sea, it can always undermine cooperation. We can only hope that the existing cooperation will curb the potential for conflict in the South China Sea. But, once again, there is no guarantee.

What could a peaceful solution between China and the Philippines look like for the Scarborough Reef?

That's hard to say. The fundamental problem is that if the conflict should further escalate, small mistakes or misconceptions from one of the parties could lead to huge conflicts. I believe all parties would be well advised to substantially scale back the existing potential for conflict in order to have a chance to negotiate a solution.

US Secretary of State Hillary Clinton has declared close relations with the Association of South East Asian Nations (ASEAN) are a 'central pillar' of the US' renewed foreign policy push in the Asia-Pacific region. (12.07.2012)

A dispute has emerged after three Chinese fishing boats were seized in North Korea. Pyongyang's traditional ally Beijing is treading diplomatically, more used to fishing disputes with other neighbors. (17.05.2012)

The waters in the South China Sea are rougher than ever, stirred up by an escalating row over rival claims in the region. China appears more than ready to flex its muscle to wrestle control. (10.05.2012)