Authorities have beefed up security in the state of Rajasthan fearing Asaram Bapu's followers could react violently to the verdict. Asaram Bapu has some 400 ashrams around the world and millions of devotees. 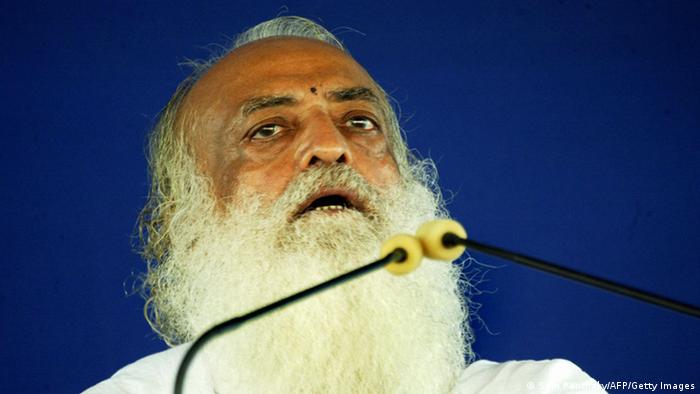 The 77-year-old self-styled spiritual "guru" was sentenced to life in jail for raping a 16-year-old devotee in 2013 at his Utsav Bains ashram (spiritual center).

"Asaram has been sentenced for life until death," Rajendra Singh, the victim's lawyer, told AFP news agency outside the court in Jodhpur.

Earlier on Wednesday, the judge read out the conviction verdict against Asaram Bapu inside a prison in the city of Jodhpur in the northwestern Rajasthan state. Heavy security was deployed in the region to prevent possible violent attacks by Bapu's followers.

The case is the latest involving high-profile "gurus" who have been jailed for sexually abusing their female devotees. In August last year, flamboyant Baba Gurmeet Ram Rahim was sentenced to 20 years in jail on charges of raping two women. Rahim's supporters took to the streets following the verdict, clashing with police and setting public property on fire.

Asaram Bapu was arrested in 2013 after the victim reported to the police that the "guru" raped her when she visited his ashram with her mother. She claimed that Bapu lured her by promising to cleanse her of evil spirits.

The "guru" denies the allegations and can appeal against the verdict in a higher court.

Bapu has some 400 ashrams around the world that teach meditation and yoga. According to his website, he has millions of followers in many parts of the world.

He is also accused of raping another woman in Gujarat between 2002 and 2004.

The dark side of India's self-styled godmen

The sprawling network of "godmen," "gurus" and swamis in the Hindu-majority country of more than a billion people has increasingly come under scrutiny for alleged sexual crimes.

Some social commentators in India say millions of Indians seem to be in thrall of these smooth-talking "godmen" who have built vast empires preying on their gullibility.

Bhavdeep Kang, author of "Gurus: Stories of India's Leading Babas" believes that godmen are rarely held accountable, least of all by their devotees.

"The centrality of the godman in the lives of their flock - as spiritual preceptor, family confidante and business advisor - creates a dependency syndrome, making the devotee as invested in the purity of the guru as the guru himself," Kang told DW.

A number of rape cases in the past few years has also shocked the South Asian country, with the government introducing stricter punishments for rapists.