Indian police have arrested a woman on suspicion of complicity in an alleged rape by a ruling party politician. The case has sparked protests across India from activists who say authorities are not doing enough. 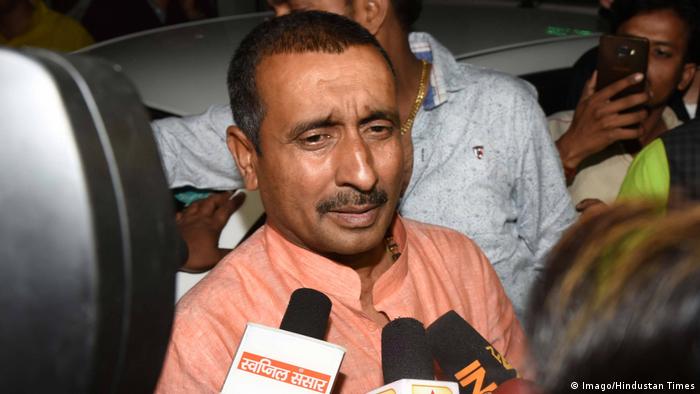 Indian police have arrested another person in relation to the alleged rape of a teenager by a ruling party politician, federal investigators said on Sunday.

"We arrested the second person, a woman named Shashi Singh, in our ongoing investigations of the case on Saturday," R.K. Gaur, a Central Bureau of Investigation (CBI) spokesman, told AFP news agency.

The CBI has already arrested Kuldeep Singh Sengar (above photo), a lawmaker from Uttar Pradesh state, which is ruled by the Hindu nationalist BJP, for allegedly raping the 17-year-old last year.

The girl's family alleged that Singh had taken their daughter to the state legislator under the pretext of giving her a job opportunity. Singh then allegedly stood guard at the door while Sengar raped the girl, the family's initial complaint to police stated.

The rape of the teenager has sparked protests by activists who say authorities have failed to investigate attacks on women.

The teenager's family had tried unsuccessfully for almost a year to register their case with police. Authorities launched a case against Sengar only last week after the victim tried to burn herself alive outside his home.

The next day, the girl's father, who had been in police custody, died from injuries he sustained in an alleged beating.

Sengar's arrest came just days after details emerged about the brutal rape and murder of an 8-year-old girl in Indian-administered Jammu and Kashmir in January.

Another brutal rape and murder of a girl was reported on Sunday in the city of Surat in Gujarat state in the country's west, according to Reuters news agency.

"The body was recovered on April 6 by the side of a highway, and according to a postmortem report, the girl was sexually assaulted and murdered on April 5," Sharma said.

He added that the victim, who according to the postmortem was 11, had not been identified and that police from neighboring states had been asked to help trace her family.

"We have put our best teams in place with all senior police officials. To nab the criminals we first need to identify the body," Sharma said.

The postmortem revealed "strangulation and smothering" with 86 signs of minor injuries, including sexual assault, he said, adding that some of the injuries were old.

A list of alleged sexual predators, comprising mainly professors from Indian universities, was recently posted and spread virally on social media, once again shining a spotlight on the issue of sex crimes in India. (08.11.2017)

The grotesque sexual assault on an 8-month-old baby in Delhi is the latest in a series of rapes that has prompted serious soul-searching as to why authorities are failing to protect women and girls. (30.01.2018)