Indian sect leader Gurmeet Ram Rahim Singh, convicted of raping two female devotees, has been sentenced to a total of 20 years in prison. Authorities increased security amid fears of fresh violence by his followers. It was originally reported by Indian media that Singh would receive a single 10-year sentence for both charges. The court restated later on Monday that he would receive 10 years for each charge, for a total jail term of 20 consecutive years.

For the sentencing, Central Bureau of Investigation (CBI) judge Jagdeep Singh traveled to India's northern Rohtak town and set up a makeshift court at the prision where the bling-loving spiritual leader of the Dera Sacha Sauda sect has been held since his conviction on Friday.

The 50-year-old cult leader, who claims to have 50 million followers, was found guilty of raping two of his devotees.

Former CBI special director M L Sharma, who first investigated the case when the incident occurred in 2002, told DW that "justice had finally been done."

"Despite the long delay in his sentencing, I am satisfied," said Sharma.

At one point during the hearing, Singh reportedly pleaded with folded hands to be given a lenient sentence and begged for forgiveness.

"He broke down and said that he was a social worker and did not deserve a ten-year imprisonment," a CBI lawyer told DW.

"I don’t see him getting out anytime soon," Atul Nanda, Punjab’s advocate general, told DW. "The powers of remission lie solely with the state government and he will have to serve out his sentence." 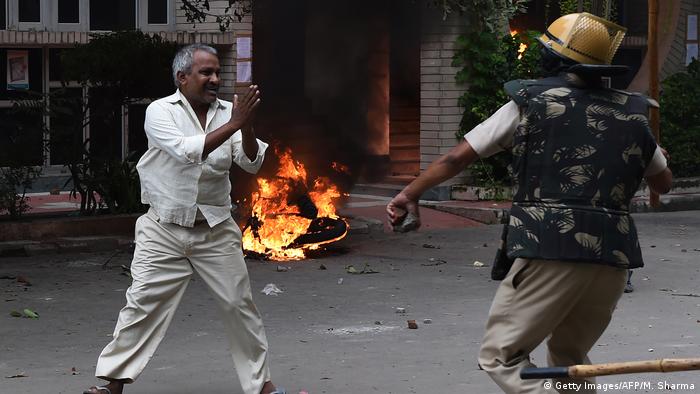 Authorities have ramped up security amid fears of fresh violence days after riots over the guilty verdict handed down Friday left at least 38 people dead and hundreds injured.

Barbed-wire barriers were erected and residents warned to stay indoors in Rohtak where Singh is being held, while senior members of his sect were placed under detention as a precautionary measure.

Read more: The dark side of India's self-styled godmen

Trains and bus services to Rohtak, in Haryana state, have been suspended to prevent Singh's fervent supporters from gathering there.

"We are taking no chances and this blanket security is in the interest of everyone," Haryana's director general of police B S Sandhu, told DW.

According to media reports, police issued orders on Monday to shoot rioters on sight in case of violence.

Except for stray incidents of violence, police and paramilitary presence has so far maintained control. Two cars were reportedly torched by Dera supporters in the city of Sirsa in Haryana, where the sect's headquarters are located.

Curfew has also been imposed and Dera's headquarters have been cordoned off. Scores of followers staying inside have been asked to immediately vacate the 1000-acre premises. 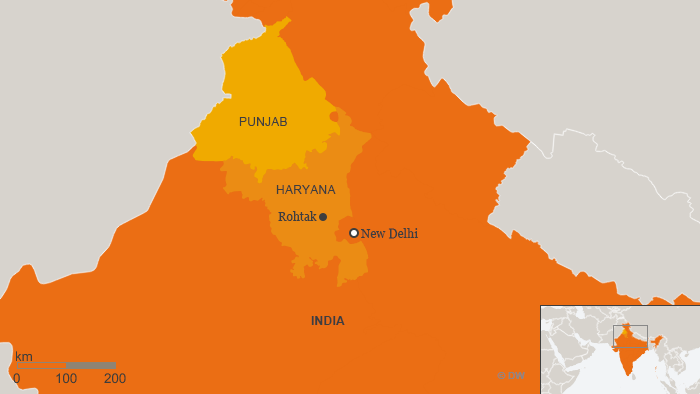 Predictably, the sentencing came as a big blow to Singh's followers.

"This is horrible. Our guru is a victim of a deep conspiracy and the politicians will pay for this. He has helped millions in the country through his teachings of love and equality," Padma Singh, a school teacher from Haryana, told DW. 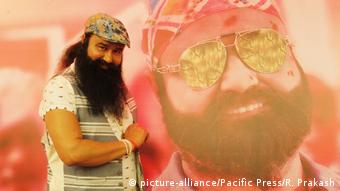 Often referred to by the nicknames “Rockstar Baba” and “Guru of Bling” because of his jeweled clothes and flashy lifestyle, Singh commands a massive following and is an influential political figure in the region. He has starred in two self-produced movies and has hosted grand musical carnivals to attract youth to his sect.

Over the years, the 50-year-old Singh has assiduously built up a veritable empire with over 250 branches and some even located abroad. His headquarters in Sirsa sits on a sprawling, 1,000-acre property that includes a hotel, cinema, cricket stadium and schools.

Although Singh is extremely controversial, many people in the state commend him for his charity and social welfare work.

"Our guru will be out soon. He will not leave us to fend for ourselves. He has god-like powers and believes in humanity. Who can keep him inside?" exclaimed Raghav Chand, a Singh follower for over a decade.

The verdict also sheds light on the dark world of cult fascination in Indian society.

"This blind dedication of his army of followers across all castes and classes defies a logical explanation. The power of devotion is formidable," Bhavdeep Kang, an author who has chronicled the lives of "godmen," told DW.

Sex and particularly sexual abuse are not uncommon among the massive network of self-styled "godmen" and gurus in India. There have been several instances in recent years.

In one case three years ago, another controversial so-called guru, Rampal Singh Jatin, also from the northern state of Haryana, was arrested after investigations uncovered sordid details of abuse and excess. During raids of his home, police recovered pregnancy kits from Jatin’s room along with sexual potency drugs.

It has been demonstrated more than once that many of the “godmen” in India are simply savvy marketers - men blessed not with enlightenment, but the ability to manipulate.

Shiv Vishwanathan, a professor at the Jindal Global Law School, maintains that these so-called gurus provide followers escape from the harsh realities of life.

Supporters of an Indian sect leader convicted of rape are leaving his headquarters, where they were holed up. His conviction sparked riots, and more violence is feared when the guru's sentence is announced on Monday. (27.08.2017)