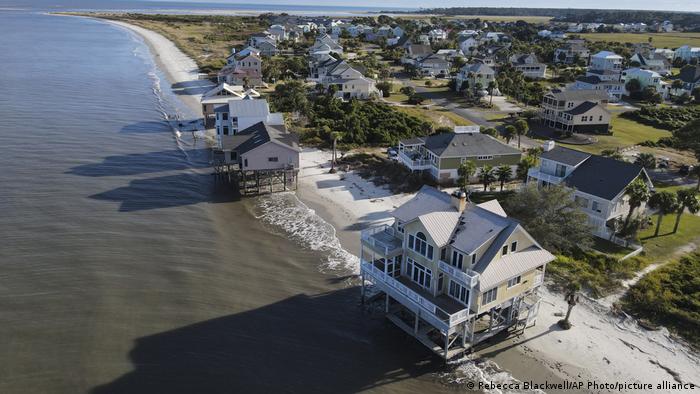 Billions will be forced to confront rising sea levels in the coming decades, though some will have the means to adapt

People have been pushing back the boundary of the sea for centuries. Whether by building dikes in the Netherlands or creating artificial islands with soil and debris in places such as Hong Kong and Dubai, it once seemed as if nothing could stand in the way of our expanding landmass.

But, with rising sea levels and disastrous flooding becoming ever more common, some communities are beginning to consider the opposite approach to counter the effects of climate change: managed retreat. 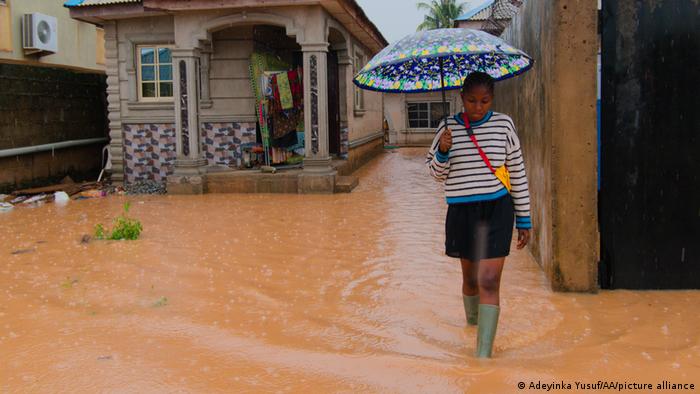 This could include moving from big cities. In Sydney, Australia, the latest extreme torrential rain has caused dams to overflow and rivers to break their banks, forcing more than 30,000 residents to evacuate. Areas north and south of the city were deluged with 1.5 meters (59 inches) of rain in 24 hours, which is close to the average rainfall for a year in coastal areas of the state of New South Wales, according to Australia's Bureau of Meteorology.

After Sydney also flooded in April, the premier of the state acknowledged that such extreme weather was "becoming more common," and it would be necessary to "respond to the changing environment."

What is a managed retreat from floods?

Managed retreat means permanently moving people and buildings away from vulnerable areas — either in a preventative way or, as is more often the case, after a disaster. That's been the case in New Orleans, ever since Hurricane Katrina devastated the low-lying city at the mouth of the Mississippi River in 2005. 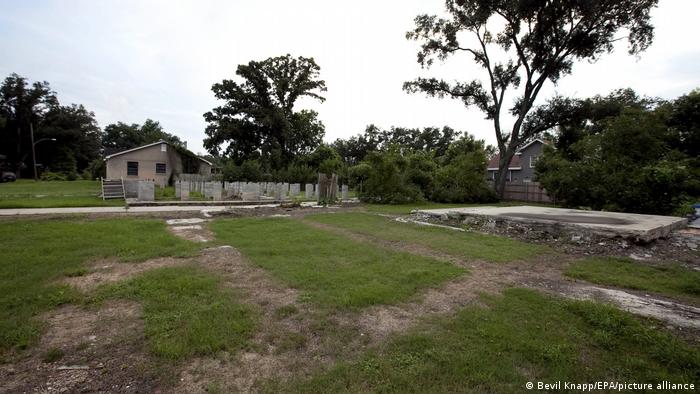 "Climate change is affecting people all over the world, and everyone is trying to figure out what to do about it," A.R. Siders, a disaster researcher at the University of Delaware, wrote in a June 2021 study. "One potential strategy, moving away from hazards, could be very effective, but it often gets overlooked."

In New Orleans, some rebuilding projects have offered low- and middle-income families the chance to relocate to new homes on higher ground, as have buyout schemes in the surrounding state of Louisiana. Similar programs are in place nationwide: As of 2017, the Hazard Mitigation Grant Program run by disaster management agency FEMA had bought up more than 43,000 homes in flood-prone areas across the United States and its territories abroad. 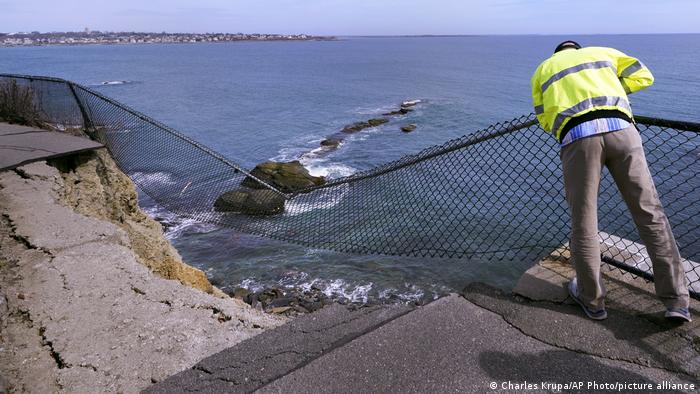 Managed retreat is "super challenging and, in some places, it's impractical ... but you can't stop the ocean," the Nature Conservancy in Rhode Island told AP

But it's not always so simple: The process can be complicated by government red tape and end up exacerbating social inequalities as long-established communities are displaced.

"Managed retreat is not a low-regrets option, nor is it easily reversed," Miyuki Hino, then a Stanford University doctoral student, wrote for UK-based climate site Carbon Brief in March 2017. "There are social and psychological difficulties in moving people from their homes — particularly if it involves loss of cultural heritage or moving a family from their ancestral lands." 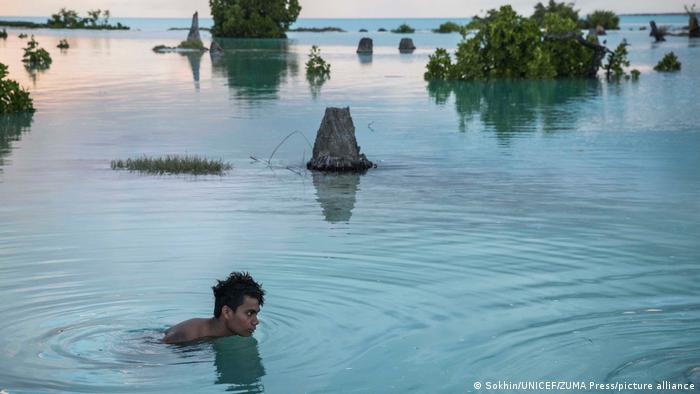 Buying land in other countries to rehome citizens

Kiribati, an archipelago of 33 islands in the central Pacific just barely above sea level, is among the first countries in the world to be threatened by the rising ocean. Some of its islands are already uninhabitable.

With the Intergovernmental Panel on Climate Change predicting a global average sea level rise of between 15 and 30 centimeters (6 to 12 inches) by 2050,  Kiribati is running out of options. In 2014, the government bought land in Fiji so its citizens could relocate, though the government recently announced plans to use that land for farming to help feed its people, in cooperation with China. It's also working with Australia and New Zealand to develop programs that will give people the necessary skills to find jobs, should they be forced to migrate. 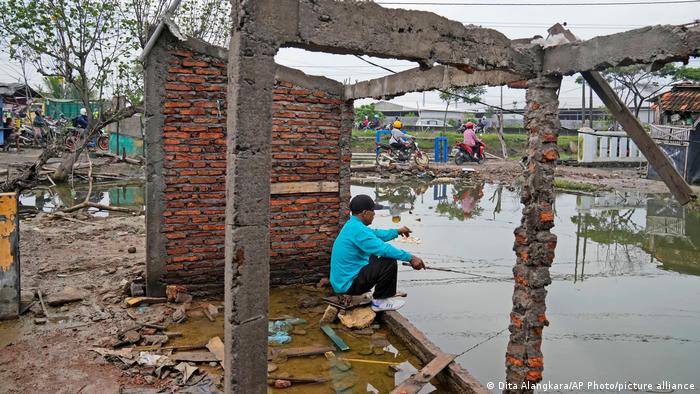 Managed retreat is often seen as a last resort, when all else has failed

Giving residential areas back to nature

Learning to live with climate change can also mean tearing down existing structures and using the land for the greater good. In the US state of New Jersey, the government has been buying private residences in areas deemed vulnerable to storms or flooding linked to climate change. It's turning that land into recreational and conservation areas that, as the state's Department of Environmental Protection puts it, "will serve as natural buffers against future storms and floods."

The voluntary Blue Acres Program, first launched in the 1990s, was expanded after Superstorm Sandy devastated the area in 2012. The program has since demolished more than 700 homes in the floodplains of the Delaware, Passaic and Raritan rivers and their tributaries. 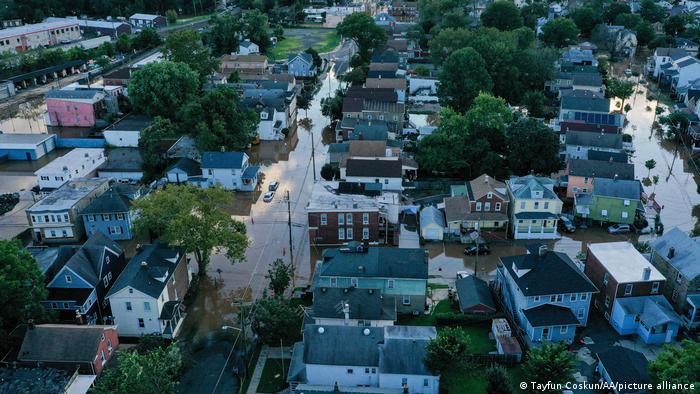 In 2021, Hurricane Ida left behind flooded neighborhoods along the US East Coast, including here in Manville, New Jersey

"New Jersey is going to have a wetter, more flooded future, and making Blue Acres proactive is reflecting that reality," Shawn M. LaTourette, New Jersey's environmental protection commissioner, told NJ Spotlight News in October. "The question will be how many properties can the state buy, how much it will ultimately cost, and how many willing sellers there will be."

People who live close to the sea aren't always willing to let their land be reclaimed by the encroaching waves. "Allowing water to come closer is a frightening concept for the average human being," Hans-Ulrich Rösner, who heads up the Wadden Sea office of the conservation group the World Wildlife Fund for Nature, told DW in December 2019. "You can only do it when people are convinced." 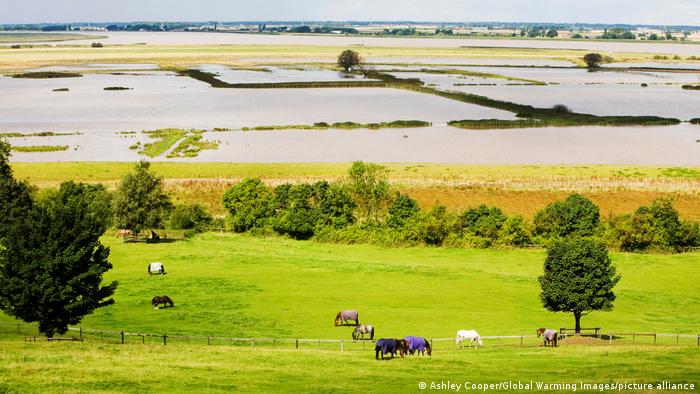 Creating one of Europe's largest floodplains by transforming fields

That was the case at a site in the Humber Estuary in eastern England, west of Hull. An attempt by the UK Environment Agency to manage flooding along the confluence of two rivers river saw about 440 hectares (1,000 acres) of agricultural land transformed into a flood storage area by intentionally removing part of an existing embankment in 2006.

The resulting floodplain, the Alkborough Flats, was one of the largest created in Europe at the time. It has reduced the risk of flooding by tidal estuary waters for about 600 properties and lessened the need for flood defenses upstream. The new wetland habitat has also attracted a variety of birds, insects, fish and vegetation. It's far from unique: The approach has also been successfully introduced in places such as the Netherlands, India and Thailand. 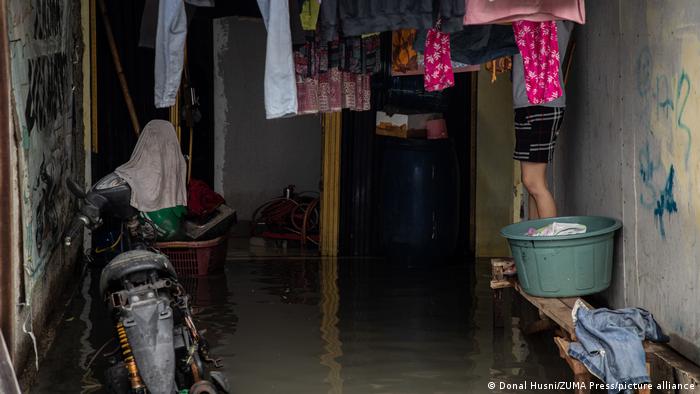 In what is one of the most extreme examples of managed retreat, Indonesia is planning to move its capital from the overcrowded, rapidly sinking metropolis of Jakarta to a new site about 2,000 kilometers (1,250 miles) away.

Parts of Jakarta, a coastal city home to more than 10 million people, are subsiding at a rate of up to 20 centimeters a year, caused in part by overextraction of groundwater; most of North Jakarta could be submerged by 2050 due to rising sea levels and regular flooding. But, even if the government finds a new home, the millions of Jakartans living in slums will most likely have to fend for themselves.

Extreme weather events are nothing new. Many creatures have had to adapt to big changes, over millions of years. But the climate crisis is putting flora and fauna under unprecedented pressure.