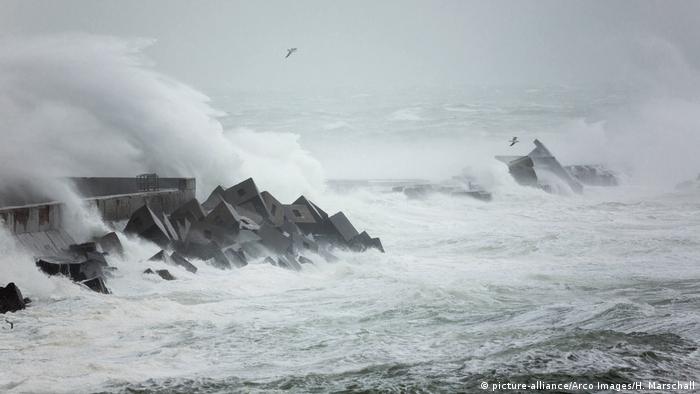 When a formidable storm ripped and rolled over northern Germany in October 1634, devouring settlements, possessions and thousands of lives in a single night, it not only redefined North Frisian history, but also its now fragmented coastline.

Remnants of what became known as the second Grote Mandrenke or great drowning, cover walls, and fill shelves, boxes and drawers in an inconspicuous wooden building on Pellworm — part of what was once a larger island that drowned in the devastating storm.

Collected by Helmut Bahnsen during decades of low-tide walks through the mudflats surrounding his native Pellworm, the tiles, early tools, thimbles, pottery and human skulls are testimony to settlements that once existed where the North Sea ebbs and flows as if it has nothing to hide.

Though some of the "couple of million" remnants of lives lived and lost by the salty northern waters date back to the Stone Age, Roman and early Medieval times, much was swept into the depths on the night of 11 October, 385 years ago. If the coastline had been better protected, Bahnsen says history might have taken a calmer course. 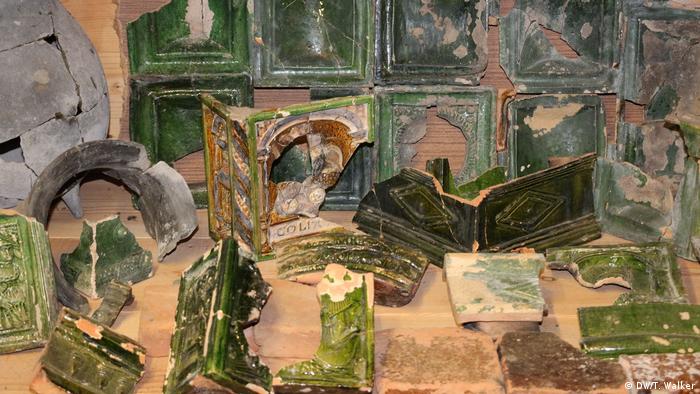 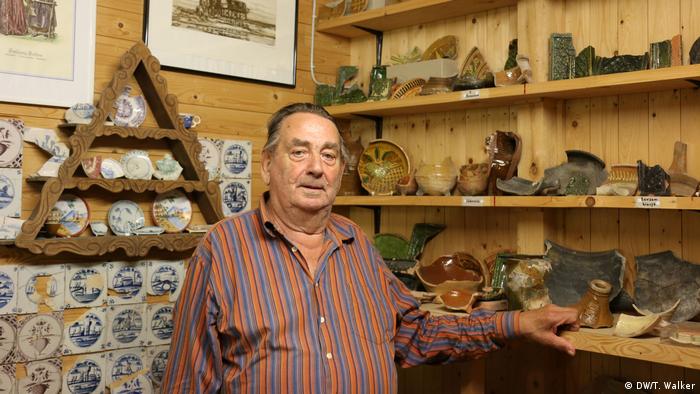 Whenever Helmut Bahnsen finds pieces that fit with each other, he glues them together

These days the dikes that surround the island and stretch along much of Germany's North Sea coastline, can be as high as eight meters and as wide as five, with the newest among them designed to be topped up if sea levels rise higher than currently predicted. In many places, these giant green defenses are all that keeps the sea from low-lying land.

But that proximity doesn't concern Ernst August Thams, who works on dike maintenance on Pellworm.

"We've been on the island for hundreds of years, and we know we have to deal with the sea," Thams told DW. "The dikes are in excellent condition, I'm not worried."

He is convinced they're the "only option" for protecting the island.

But three years ago, when the town of Husum over on the mainland was considering what to do with a particular piece of shoreline, a very different idea was put forward. It was to take some of the pressure off the dikes by creating a small area of coastline where the sea would have been able to encroach on the land. 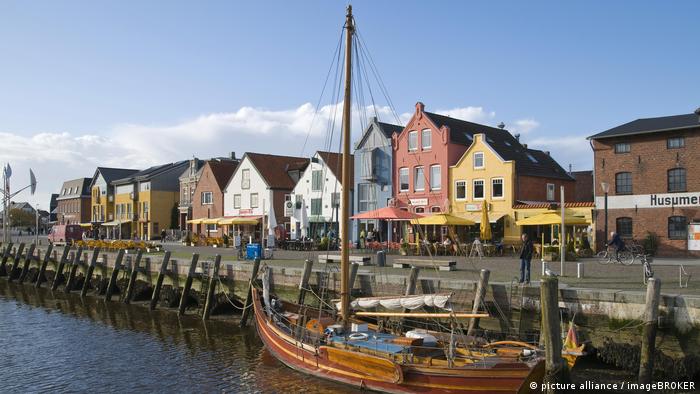 Known as managed realignment or managed retreat, the process allows inundation by shortening, lowering or moving existing defenses inland, or by extending floodplains in order to give water somewhere to go. Though not widely used, conservationists often regard it as an alternative means of protection.

But Hans-Ulrich Rösner, who heads up the Wadden Sea office of conservation group WWF admits that it's a hard message to sell.

"Allowing water to come closer is a frightening concept for the average human being," he said. "You can only do it when people are convinced."

In Husum, they weren't.

Mayor Uwe Schmitz believes it was ultimately the right decision not to press ahead with the proposed  project in Husum, but he doesn't rule out similar ventures in the years ahead.

"There will certainly be more heavy rainfall events in the future that mean we'll have to consider using areas of agricultural land as floodplains," Schmitz told DW. "But these are ethical issues that go against the culture of the northern people who have not only defended themselves from the sea for centuries, but sought to wrest land from it." 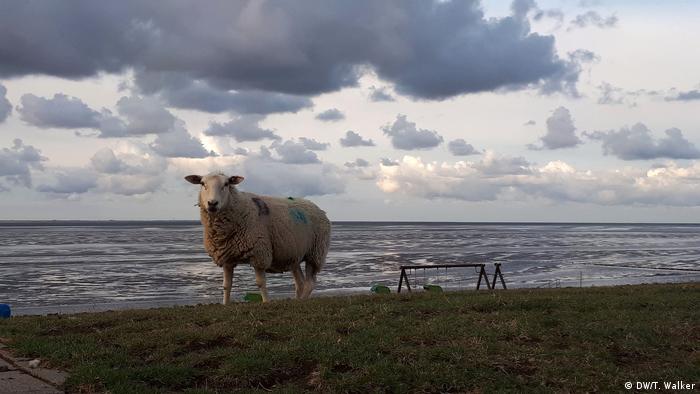 Will agriculture remain a viable option in coastal regions?

Read more: Cold, grey and far away? An exploration of the North and Baltic seas

John Riby, a fellow of the UK Institution of Civil Engineers who has worked on flood and coastal protection issues for many years, describes managed realignment as "working with nature for the benefit of man", and says the key to its success is the choice of location.

He cites the Tees Estuary in northern England — home to industrial sites including a nuclear power plant and petrochemical companies at risk of inundation — as one such place.

When businesses in the area became so badly affected by flooding that they sometimes had to close down while the water subsided, a plan for managed retreat was set in motion.

"The defenses were set back to allow space for the water without impacting the businesses," Riby explained.

"Convention says you would have built new defenses on the river, but because they had the ability to allow water to inundate the floodplains and channel water into the right location, they were able to create defenses that not only protected these businesses, but also created quite a lot of natural habitat for seals and flora and fauna of all sorts," Riby said. 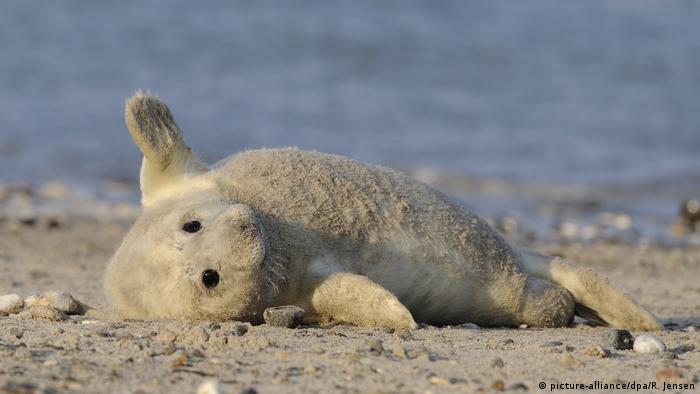 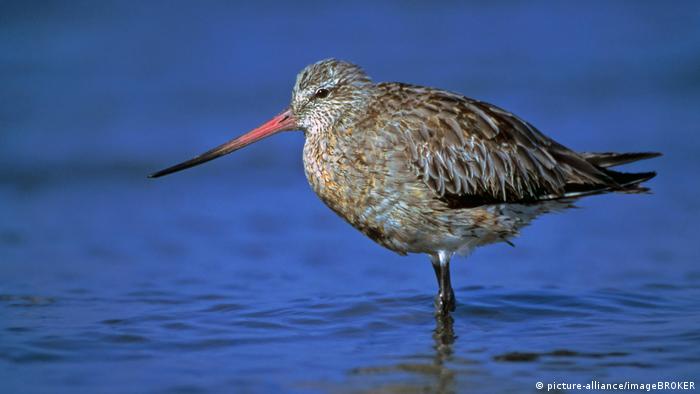 Retreating when it is still manageable

But much coastline around the world is given over to residential development, and that complicates things. Asking people to leave their homes and communities to make way for an adaptation process, is, Riby says, "a very blunt instrument."

"Where you've got housing, is not a great place to be putting managed realignment," he said.

Yet in some cases, the decision to retreat is voluntary. In the aftermath of Hurricane Sandy, which crashed across the Carribean and the US in 2012, three waterfront communities in the New York borough of Staten Island gradually decided to approach the state to buy their land. With around 90 percent of residents on board, a buy-out was agreed.

US photographer and filmmaker Nathan Kensinger who has spent many years documenting New York waterfronts, accompanied the process of people moving out and wildlife moving in.

His sometimes eerie images of toys, clothes and furniture left in and around deserted homes speak volumes about the power of the ocean in a warming world. Most of what once constituted these communities is now long gone. 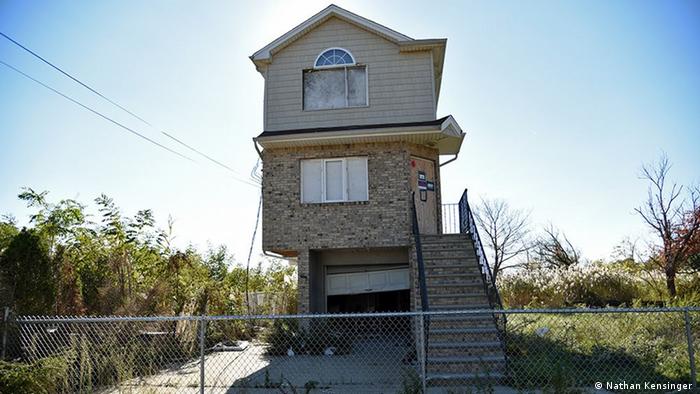 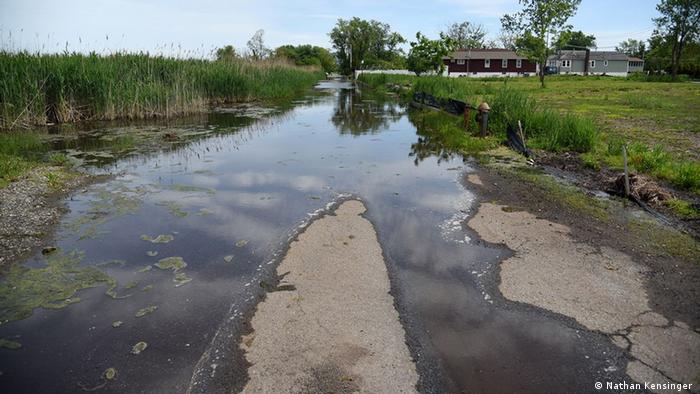 This road in Oakwood Beach, Staten Island, used to be walked and driven down as part of a thriving community. It now floods regularly and is giving way to nature

"The idea with this managed retreat program was to create a buffer zone next to the ocean," Kensinger told DW. "They planted a wetland where the homes once stood, and within the neighborhoods that are furthest along, you now see fields of wild flowers and grasses and empty streets and empty blocs."

A far cry, but no great distance from Manhattan, the "holdouts" — the houses left standing — are now surrounded by marshlands and streets that flood during rainstorms.

Kensinger says they're not obliged to move away, but believes more and more waterfront neighborhoods in the state of New York will ultimately have to embrace the idea of managed retreat.

"Otherwise they're going to be forced to take a retreat that is much less planned out, and much more a response to a disaster."

Because as the fragments of former lives back in a small museum on the German island of Pellworm so boldly illustrate, the one thing that will never stop moving is the sea itself.

Huge amounts of bombs and grenades rest at the bottom of the North Sea and Baltic Sea. But the risk of them exploding should be the least of our worries. (23.08.2017)

Europe's waters are expected to lose 30% of their already vulnerable ocean life to further warming, says a new study. Combined with overfishing, that loss can threaten livelihood and food security in coastal nations. (11.06.2019)