While traces of divided Berlin are fast disappearing nearly 30 years since the fall of the Wall, a group of artists in the former East Berlin district of Pankow are trying to preserve a monument to a lost era. 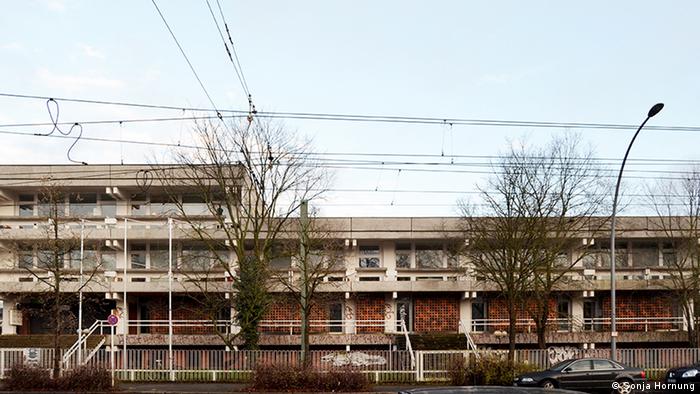 As planes roar overhead into Berlin's Tegel airport, 19th century mansions share the street with vast, dishevelled concrete structures in what was the former German Democratic Republic's embassy district. These diplomatic Plattenbauten, some abandoned, others bought and sold as part of Berlin's property speculation boom, symbolize a time of Cold War detente between a Communist regime and capitalist nations on the other side of the Iron Curtain.

Among the most impressive structures once occupied by diplomatic staff from unlikely GDR bedfellows like the UK and France, the onetime Australian embassy in East Germany is now a place where international artists are reviving a debate about the value of culture and public space in a city that is being sold off to the highest bidder.

The artists, who could be evicted at the end of August, are not only trying to save their studio gallery spaces from being parcelled into high-end apartments. They've also mounted a new exhibition there. Titled "Ex-Embassy," it reflects on the intersecting histories and ideologies the building evokes: from the Berlin Wall of yesteryear to the invisible borders thrown up by far-right populists today; genocide in Australia and Germany – and resistance to private property speculation at a location that once embodied the idea of public ownership of land and housing.

The East and the West

After Australia became the world's first non-socialist nation to host an East German consulate in 1973, it agreed to open an embassy to the GDR in a brutalist concrete palace designed by Horst Bauer, who also built the "twin" Iraq embassy next door and earlier created East Berlin's iconic Café Moskau in the street then named Stalin Allee.

Australia's then left-wing government had nationalized many industries, introduced free health care and education and hoped to open lucrative trade with the East Germans. But at the height of the Cold War, business was slow and the embassy closed in 1986 after only 11 years.

The monstrous prefab building was one of the biggest of some 135 embassies that the GDR had built en masse. It has since been home to a medical laboratory, a kindergarten, and, after the building was sold off in 2015, the Atelierhaus Australische Botschaft (Ost) that now hosts 35 artists on a temporary lease who might also stop potential squatters and vandals — a problem for the Iraqi embassy next door since it was abandoned in 1991 after the Gulf War. 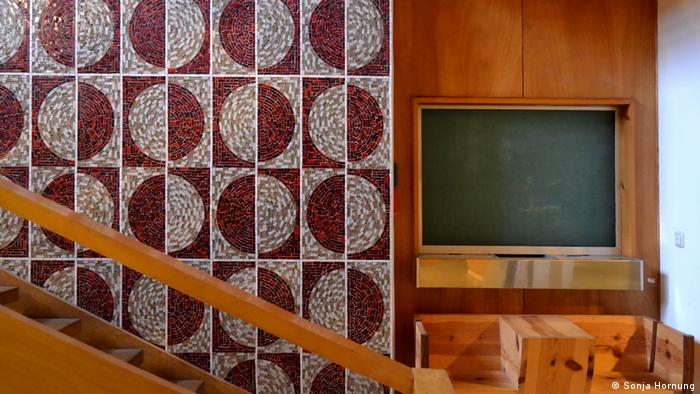 Sonja Hornung is an Australian visual artist who took a studio in the building in April 2017. For that, she had to beat 300 other artists who, desperate for cheap studio space in Berlin, turned up for the viewing. Hornung joined creatives working in the fine arts, theater, performance, dance, literature, music, photography — and a tennis instructor. 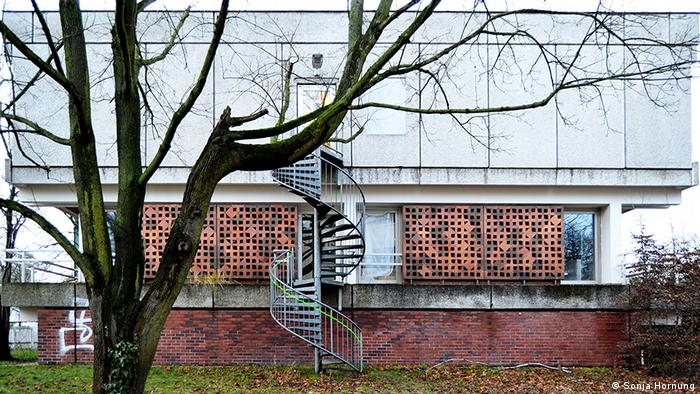 Once inhabited by diplomats, today by artists. And tomorrow?

"I moved into the building with a bit of an agenda," Hornung told DW, explaining her curiosity for consular spaces. After moving from Melbourne to Berlin in 2012, she spent two years trying to convince various embassies to replace their national flags with flags shorn of national symbolism. Partly in reaction to the political exploitation of national identity, she was also interested in embassies as neutral "extra-territorial spaces." Her newfound embassy art space was in fact never marked by recognizably Australian national insignias like the kangaroo or the emu.

Along with her creative cohorts, Hornung also saw an opportunity to make the temporary studio spaces permanent. With artists in Berlin increasingly forced to move as their studios are bought and sold by speculators, the embassy artists have formed an association that aims to "extract the building from the real estate market" and make the heritage-listed building "a studio house and permanent cultural site."

The idea is to purchase the Plattenbau through state and private funding. The owner is now open to the idea if the exorbitantly high price can be met.

"It's very important for Berlin to look after its artists who have played an important role in creating this beautiful city," says Hornung, who adds that the Atelierhaus is the only publicly accessible embassy building in the former diplomatic quarter.

Working with Rachel O'Reilly, another Australian artist, curator and writer, Hornung has initiated an exhibition and text series at the Atelierhaus Australische Botschaft titled "Ex-Embassy" that explores the convergence of transnational histories and narratives at the site. 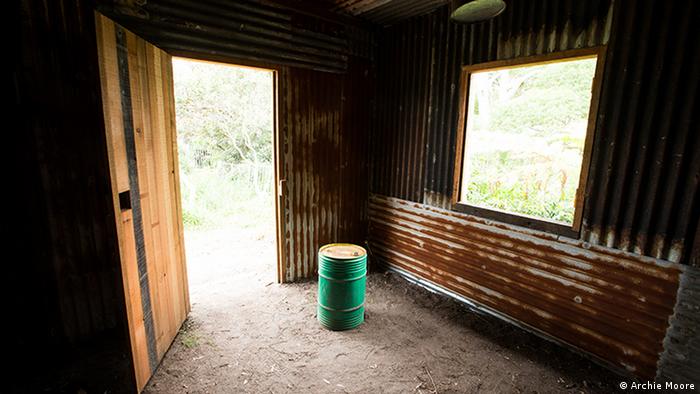 In A Home Away from Home, Indigenous Australian artist Archie Moore explores historical idioms of racism and power as reflected in Australian history

Several Indigenous Australian artists are taking part, including Archie Moore, who has built an "invisible" wall between two hedges in the embassy gardens: The structure is covered with fake bricks on one side and a printed image of the former "gap" on the other. It's an obstacle for visitors as they enter an exhibition that spawls in and around the site.

A metaphor for social and political exclusion, this "intervention" speaks to the history of the divided German capital, but also to US President Donald Trump and his border wall plans and to nationalistic political narratives of exclusion and division including the White Australia policy that limited migration of non-Europeans and only ended the year Australia's GDR embassy was founded. Inside the building, Moore's work also plays on the xenophobic expression "swamped by” that has turned up in Australian political discourse when migration is discussed.

"People think the Wall has gone, but there are invisible walls," Rachel O'Reilly told DW about Moore's work. "The placement of borders isn't necessarily around states, it's inside states." 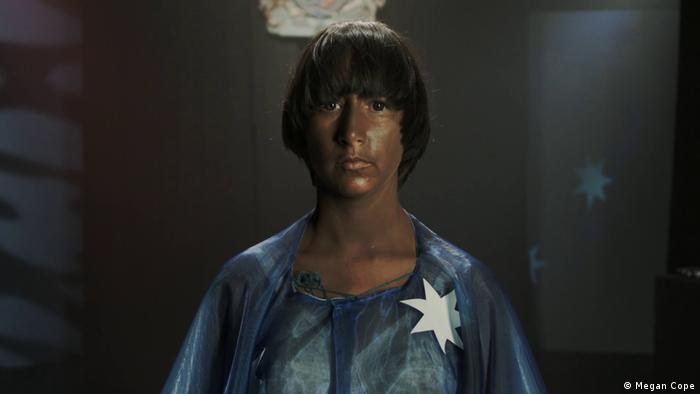 A still from Megan Cope's film The Blacktism

In this way, another Indigenous artist, Megan Cope, presents the video work The Blaktism, which satirically depicts a classification ritual of an "Aboriginal person" by white authorities.

In addition to opposing the White Australia policy, the GDR regime actively supported the Aboriginal struggle against a colonialism that sometimes amounted to genocide. In 1988, when Aboriginal people protested against celebrations marking the 200th anniversary of the European "invasion" of Australia, an Indigenous reggae band called No Fixed Address were invited to East Berlin for the East German Festival of Political Song and were given a rare international space to voice their demand for Aboriginal human and land rights.

These converging historical narratives are juxtaposed with works that question the exclusionary basis of private property that led to the expropriation of Aboriginal land — and now threatens the exhibition site itself.

It remains to be seen whether "Ex-Embassy" marks the consolidation, and not the end, of a bold transnational artistic space in unified Berlin.

Rosalie Delaney in Berlin contributed reporting to this article.

Last year, buyers paid a record-breaking sum for apartments, houses and plots of land in the German capital, according to a report. The most expensive apartment sold last year set its new owner back €8.2 million. (24.07.2018)

Berlin and Beyond: Writing on the wall

If all the world's a stage, then all of Berlin is a canvas. Here, urban art is writ large. No bad thing, says Tamsin Walker, in a city where money is increasingly doing the talking. (29.06.2018)