The sculpture of the US first lady stood close to her hometown of Sevnica, Slovenia. It had attracted controversy, with some calling it a scarecrow while others likened it to the Virgin Mary. 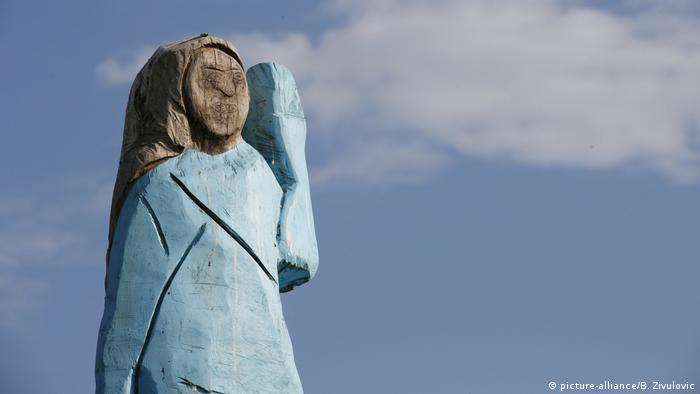 The incident took place on July 4, when Independence Day in the US is celebrated.

Police have no leads on the "unknown vandals" but are continuing to investigate, according to media reports.

The statue was commissioned by US artist Brad Downey and created by Slovenian local folk artist Ales Zupevc, who carved the sculpture with a chainsaw from the trunk of a tree.

The figure was roughly-cut and had no facial features. It was painted with a pale blue wraparound coat that resembled the one Melania Trump wore at the inauguration of her husband US President Donald Trump. 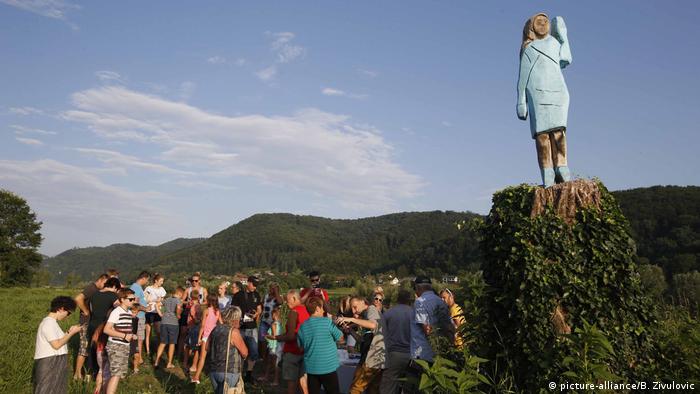 Police have launched an investigation into the burning of the statue

Downey said he had the life-sized blackened, disfigured sculpture removed as soon as police informed him of the incident on July 5.

"I want to know why they did it," said Downey.

It was not clear whether burning the statue was an artistic act, said Slovenian national broadcaster RTV.

The statue has been described on social media as a scarecrow while other critics saw the work as a representation of the Virgin Mary.

Downey said he wanted the statue to stimulate debate around the political situation in the US, particularly on immigration.

In recent weeks, anti-racism demonstrators have pulled down or defaced a number of statues of prominent figures deemed to have colonial or racist connections, following the death of George Floyd at the hands of Minneapolis police.

In response, Trump pledged to take a hard line on anyone destroying or vandalizing US historical monuments.

In January, a large wooden statue resembling Donald Trump, designed by a local artist last year, was burnt in Slovenia's city of Moravce, east of the capital Ljubljana.

US First Lady Melania Trump has threatened to sue a language school in Croatia after it used her image in their marketing. The billboards poked fun at Trump, a native of Slovenia, and her heavily accented English. (20.09.2017)

Ever wonder what Africa's first ladies do?

US First Lady Melania Trump made the first official visit to Africa under her husband's presidency this week to promote child welfare and conservation. Africa has more than 50 first ladies. DW looks at a few of them. (05.10.2018)

Stephanie Grisham has been tapped to be the next White House press secretary. It remains to be seen what direction she will take, as her predecessors were known for their confrontational relationships with the press. (25.06.2019)