US First Lady Melania Trump has threatened to sue a language school in Croatia after it used her image in their marketing. The billboards poked fun at Trump, a native of Slovenia, and her heavily accented English. 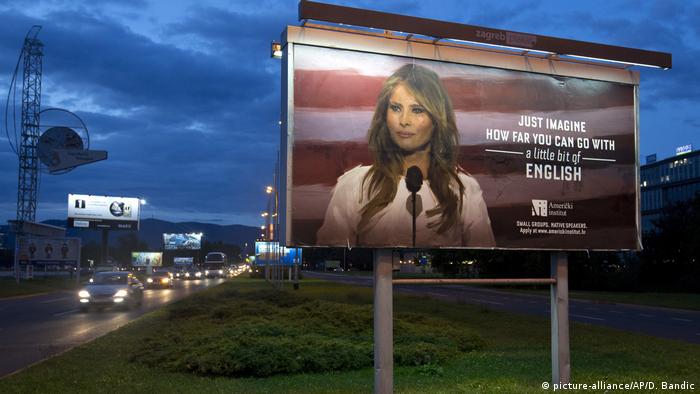 An English language school in the Croatian capital, Zagreb, was forced to pull its advertising billboards after US First Lady Melania Trump threatened to sue over the use of her image in a billboard that could be interpreted as criticism of her command of English after more than a decade married to Donald Trump.

The billboards featured a picture of Melania Trump alongside the slogan, "Just imagine how far you can go with a little bit of English."

Ivis Buric, a spokeswoman for the school, American Institute, has apologized. She said the billboards were "misunderstood as something intended to mock the US first lady," and said they were intended "to show her as a role model."

Nevertheless, Buric admitted the campaign had proven to be "very successful" because of the wide local and international publicity it had received.

The first lady has hired a law firm tasked with protecting her image in her native Slovenia, where her face has been used without permission to market items including cakes and ice cream, underwear and even holiday packages.

"I'm satisfied with the fact that the school admitted that they violated the law and that they are ready to remove the billboards and [Facebook] ads," said Trump's lawyer, Natasa Pirc-Musar. "We are still analyzing possible further legal steps."

Melania Trump was born in neighboring Slovenia, then part of Yugoslavia, as Melanija Knavs, but left in her 20s to pursue an international modelling career. She met Donald Trump, then a real estate developer and self-proclaimed billionaire, at a New York Fashion Week party in 1998.