Protesters pulled down a statue of Christopher Columbus in Baltimore on the same day that President Donald Trump vowed to preserve the way of life that he said began when the Italian explorer reached the Americas. 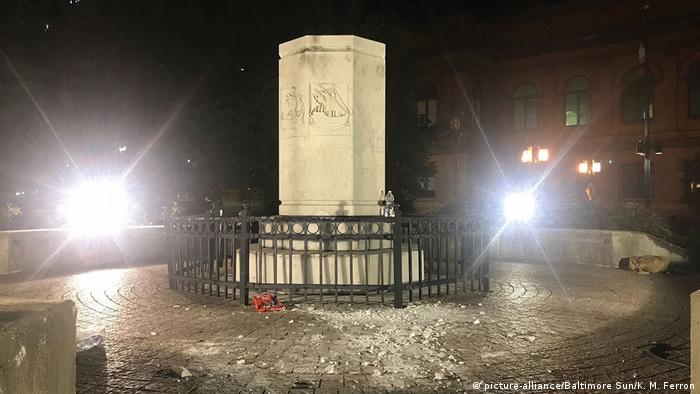 A group of protesters toppled a statue of Christopher Columbus and tossed it into Baltimore's Inner Harbor on Saturday night, the same day that US President Donald Trump vowed to protect the "American way of life" that began when "Columbus discovered America."

Demonstrators used ropes to pull down the monument, located near the city's Little Italy neighborhood, according to media reports.

Toppling the Columbus statue was part of the "re-examination taking place nationally and globally around some of these monuments and statues that may represent different things to different people," The Baltimore Sun newspaper quoted Lester Davis, a spokesman for Democratic Mayor Bernard Young as saying.

A wave of protests began in the US after the police killing of Black man George Floyd on May 25. Protesters have called for the removal of many controversial statues, including those of Columbus, Confederate figures and others who they say are responsible for centuries of oppression.

Saturday's protest is the latest incident involving Columbus statues, which have also been targeted in other US cities, including Richmond, Miami, St. Paul and Boston.

During the independence day celebrations at the White House, Trump said that he will fight to preserve the life that was built after Columbus discovered America.

"Together we will fight for the American dream and we will defend, to protect and preserve [the] American way of life, which began in 1492 when Columbus discovered America," Trump said.

"We will never allow an angry mob to tear down our statues, erase our history, indoctrinate our children or trample on our freedoms," he added.

Columbus has long been praised as a daring explorer and the discoverer of the Americas whose 1492 journey paved the way for the creation of the US roughly three centuries later.

In recent years, however, historians and activists have highlighted his enslavement, exploitation and bloody suppression of native populations. Columbus is often viewed as opening the door to centuries of European colonization of the Americas and the genocide, war and oppression that came with it.

Calls are also growing to abolish Columbus Day, the US national holiday held in October.