Armenian prime minister to step down in April

Prime Minister Nikol Pashinyan has announced his resignation as a means of curbing the political turmoil in the former Soviet republic. 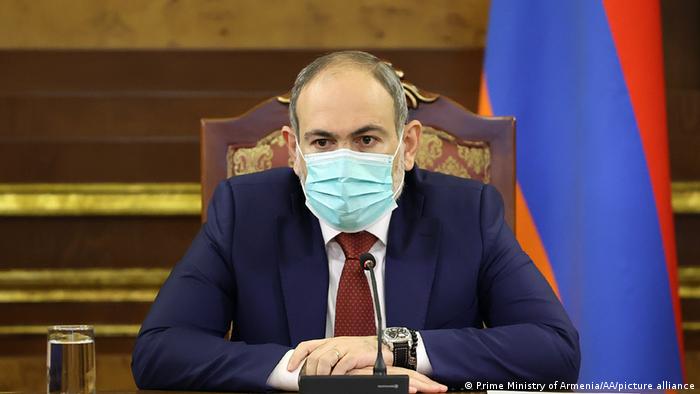 Armenian Prime Minister Nikol Pashinyan will resign in April to hold snap elections in June, he announced in a video on his Facebook page on Sunday.

"I will resign in April. I will resign not to resign, but in order for early elections to take place," he told a crowd during a visit to the northwest of the country.

"I will continue to serve as interim prime minister," he added.

Pashinyan announced the snap elections earlier in March. In line with Armenian law, snap elections can take place once the prime minister steps down and parliament fails to elect a replacement two times.

Pashinyan has been under increasing pressure to step down following a military defeat against neighboring Azerbaijan and an ongoing spat with Armenian military leaders.

Why is there pressure on Pashinyan to step down?

Pashinyan has faced constant calls to step down after signing a Russian-brokered ceasefire with Azerbaijan in November.

The conflict ended with Armenia ceding control over the de facto autonomous region of Nagorno-Karabakh in Azerbaijan.

Concern is growing in Armenia over deepening political crisis

In the ensuing row between the government and the military over who was responsible for the humiliating defeat, the military joined calls for Pashinyan's resignation.

The prime minister in turn tried to remove the military's chief of staff Onik Gasparyan, claiming that there had effectively been an attempted coup.

Thousands of protesters have also called on Pashinyan to leave power, blaming him for the country's military defeat.