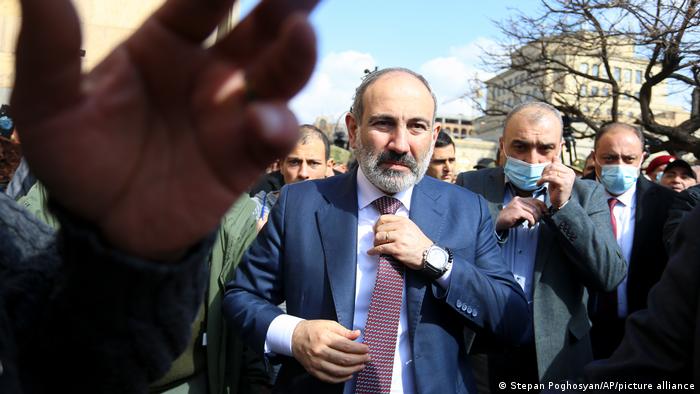 Pashinyan finds himself increasingly isolated in the row with the military

Amid an escalating row between the government and the military in Armenia, President Armen Sarkissian blocked the dismissal of the top military officer on Saturday.

Prime Minister Nikol Pashinyan claims the military is plotting a coup. He has pledged to fire Onik Gasparyan, the chief of the armed forces general staff, after the military leaders demanded his resignation.

However, Pashinyan's order was deemed to be unconstitutional by "attorneys and experts" who studied it, the office of President Sarkissian said on Saturday.

The statement also said that the president is not protecting any political power and is guided by national interests.

"The ongoing situation is unprecedented, it needs structural and comprehensive solutions, and it cannot be solved by frequent personnel changes without taking the situation into account."

Responding with a Facebook post, Pashinyan said he would make use of his legal right to send the order to the president once again. The prime minister said he expected it would be signed "in accordance with the established procedure."

President Sarkissian usually plays a largely ceremonial role in the ex-Soviet state. However, the escalating crisis placed him in the center of the power struggle between the top military leaders and Pashinyan, whose popularity took a dive following a devastating defeat in the last year's war with Azerbaijan.

The 45-year-old Pashinyan has so far managed to hold on to power despite calls for his resignation. The latest row with the military started after the prime minister said that the Russian-made Iskander missiles "did not explode or only 10% of them exploded" on impact during the 2020 conflict.

The claim was disputed by a deputy chief of armed forces. Pashinyan responded by firing the officer, which in turn prompted Onik Gasparyan and over 40 other top military leaders to call for the prime minister to step down.

What do protesters say of Pashinyan?

Pashinyan took power in 2018 on the wings of a popular movement that ousted longtime leader Serzh Sargsyan. However, Pashinyan now faces protests against his own government, with thousands of people rallying in the capital Yerevan for three days in a row and calling for him to resign.

"Pashinyan must leave for the sake of our state because his position is very weak today. Nobody takes him seriously," Vera Simonyan, a 28-year-old IT specialist, told the AFP news agency at the Saturday rally.

Former premier Vazgen Manukyan told the crowd that the crisis would likely be "resolved within two to three days".

"Today Pashinyan has no support," he added, urging the security services and the police to join the army in calling for the prime minister to resign.