Supporters and opposition to leader Nikol Pashinyan have staged rival rallies in Yerevan as calls grow for his resignation. Russia's Putin has urged restraint amid the growing tension.

Armenian Prime Minister Nikol Pashinyan marched through the streets of the capital Yerevan and held a rally with thousands of supporters on Thursday, after accusing the military of attempting a coup against him.

The army had earlier demanded he and his government resign.

"I became the prime minister not of my own will, but because people decided so," Pashinyan shouted to the crowd of more than 20,000 supporters in the capital's Republic Square. "Let people demand my resignation or shoot me in the square."

Meanwhile, the opposition staged a parallel rally, also attended by thousands of supporters.

Pashinyan has faced calls to quit since November, after what critics called a disastrous handling of the six-week conflict between Azerbaijan and ethnic Armenian forces over the disputed region of Nagorno-Karabakh. 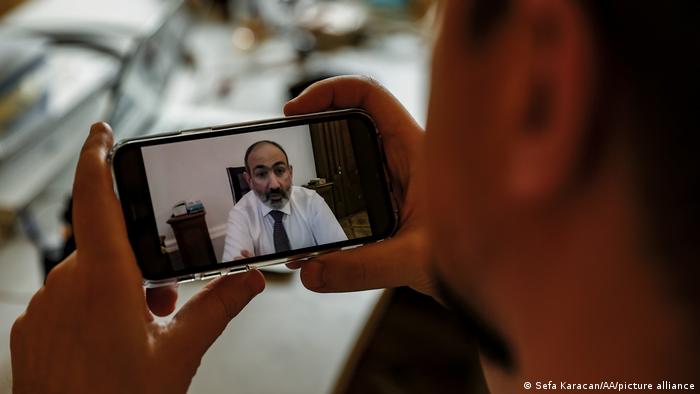 Before marching with his supporters, Pashinyan issued a live video address warning of an 'attempted military coup'

"The situation is tense, but we must agree that there cannot be clashes," Pashinyan told his supporters through a megaphone. He added that the latest political instability following months of protests against his rule remained "manageable."

He warned that the latest developments have led to an "explosive situation, which is fraught with unpredictable consequences."

DW's Moscow correspondent Emily Sherwin tweeted the Armenian leader marched while calling on supporters to "defend the revolution" — a reference to the country's 2018 anti-government protests, during which Pashinyan was elected Prime Minister.

The opposition rally at Freedom Square

In nearby Freedom Square, another crowd of around 20,000 opposition supporters gathered.

Some vowed to stay there until Pashinyan stepped down.

Demonstrators paralyzed traffic all around Yerevan, chanting "Nikol, you traitor!" and "Nikol, resign!"

There were sporadic scuffles in the streets between the sides. The rival demonstrations also continued in different parts of the capital. As evening fell, some opposition supporters built barricades on the central avenue to step up pressure on Pashinyan. Russia's President Vladimir Putin urged for all sides involved in the political crisis to show restraint, in a phone call with Armenia's Prime Minister Nikol Pashinyan, the Interfax news agency quoted the Kremlin spokesman as saying on Thursday.

Kremlin spokesman Dmitry Peskov said Moscow was concerned by the events in Yerevan. He urged the sides to resolve the situation peacefully and within the framework of the constitution.

Turkey had backed Azerbaijan in the conflict that initially undermined Pashinyan's position.

Also on Thursday, Armenia's largest opposition party, which has been calling on Pashinyan to resign for months, gave him an ultimatum to step down.

"We call on Nikol Pashinyan not to lead the country towards civil war and to avoid bloodshed. Pashinyan has one last chance to avoid turmoil," the Prosperous Armenia party said in a statement.

The military also called on him to resign this week. "The ineffective management of the current government and the serious mistakes in foreign policy have put the country on the brink of collapse," the army said in a statement. It was unclear whether the army was willing to use force to back the statement.

Pashinyan, 45, has repeatedly rejected calls for his resignation despite opposition protests. He says he has taken responsibility for what happened but needs to ensure Armenia's security.

Will Pashinyan's step down?

Moscow correspondent Emily Sherwin, who was in Armenia reporting on the ceasefire deal that was struck in November 2020, told DW on Thursday:

"When I was there a few months ago [shortly after the ceasefire deal was reached], people were already calling for Pashinyan's resignation."

"Many people really see [the ceasefire] as a humiliation. May people were saying to me "he sold off part of Armenian, part of our territory," she said.

"However, today, thousands of people heeded Pashinyan's calls to take to the streets. It does seem that he has more support a few months later," she added.

Despite the upheaval, Sherwin said it was "unlikely" that the military would use force: "It's certainly unusual in Armenia for the army to call on the Prime Minster to resign, or to get involved in politics."

"The Ministry of Defense has called for calm and for the army not to meddle in politics," she added. 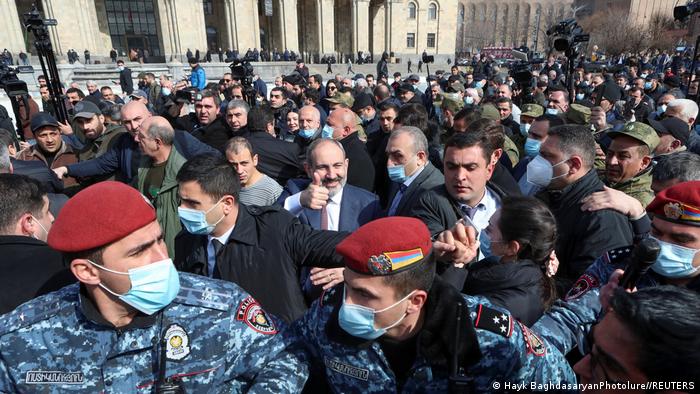 'What is happening is a military coup'

Pashinyan responded to the calls for his resignation by calling on followers to join Thursday's demonstration in the capital.

"The most important problem now is to keep the power in the hands of the people, because I consider what is happening to be a military coup," he said, via a Facebook livestream.

He added that he had dismissed the head of the general staff of the armed forces, a move that still needs to be approved by the president. A replacement would be announced later and the crisis would be managed constitutionally, he said.

Recently, tens of thousands of people called for him to step down in protests last week. More than 4,700 people died in the fighting from September to November last year over Nagorno-Karabakh, which is mostly inhabited by Christian Armenians. During that time, Muslim-majority Azerbaijan reclaimed large parts of the territory that it lost to Armenia in the early 1990s. 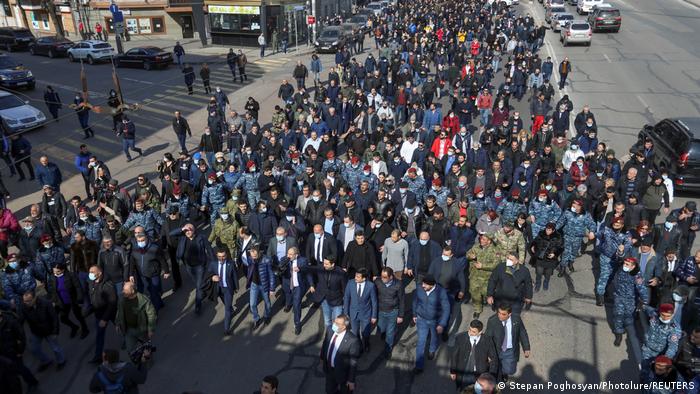 A tentative truce appears to be holding, but Prime Minister Nikol Pashinyan's office said the situation was still "very tense." Over 200 soldiers died in fighting this week.