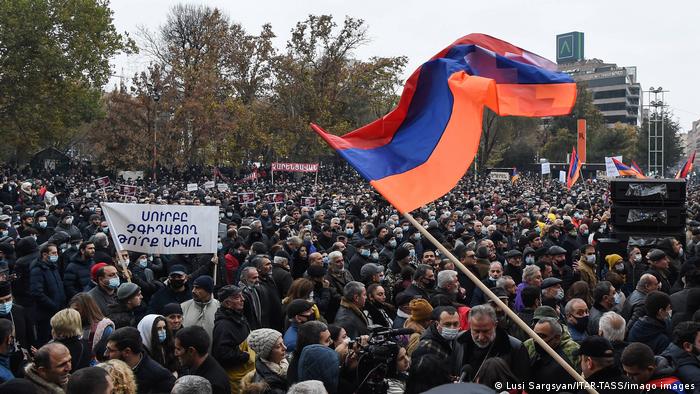 Tens of thousands of people took to the streets of Armenia on Saturday to call for the resignation of Prime Minister Nikol Pashinyan, in the biggest protest yet sparked by last month's agreement to end a recent territorial conflict with Azerbaijan.

After six weeks of fighting which resulted in 4,600 deaths, Pashinyan signed a pact with Azerbaijan, ceding control of large parts of the disputed Nagorno-Karabakh region. The ceasefire deal, brokered by Russian President Vladimir Putin, came into force on November 10 and is kept in check by 2,000 peacekeepers deployed by the Kremlin.

Pashinyan was denounced as a "traitor" in Saturday's protests after the Azerbaijani army reclaimed lands that Armenian forces had ruled for more than a quarter-century.

More than 20,000 protesters rallied in the capital city of Yerevan on Saturday, many of whom marched to the prime minister's official residence.

"The seat of the prime minister of Armenia is currently being occupied by a political corpse," Artur Vanetsyan, the leader of the opposition party Homeland and the former head of the National Security Service, said at the rally in Yerevan.

Armenia's opposition parties warned Pashinyan there would be civil disobedience across the country if he does not step down before noon on Tuesday.

Pashinyan has steadfastly refused to quit, defending the peace agreement as a painful but necessary act that prevented Azerbaijan from overrunning the entire Nagorno-Karabakh region, thus saving thousands of lives in the process.

The leader of Nagorno-Karabakh says 25,000 displaced people have returned following the signing of a peace deal between Armenia and Azerbaijan. Around half of the 150,000 population fled during the six-week conflict.