Jordan's foreign minister and the head of the Arab League said they would push for an international resolution on naming Jerusalem as the Palestinian capital. This follows the US move to recognize Jerusalem as Israel's. 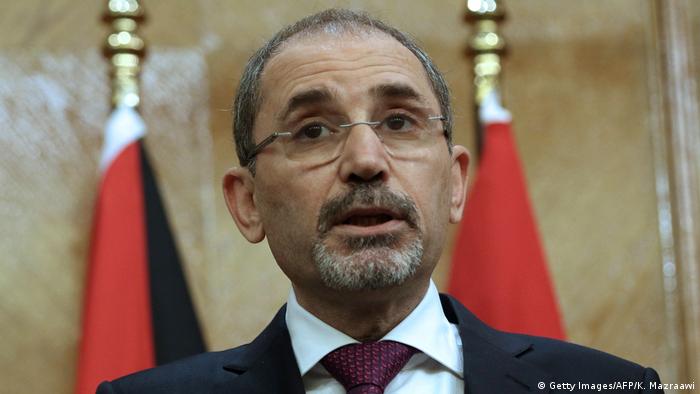 Arab states will push for the international community to recognize East Jerusalem as the capital of a Palestinian state, Jordan's foreign minister said Saturday, a month after US President Donald Trump recognized the city as Israel's capital.

"We will confront the [US] decision by seeking a resolution, an international one, to recognize a Palestinian state on 1967 borders with Jerusalem as its capital," Ayman Safadi said following a meeting of Arab leaders in the Jordanian capital, Amman.

Foreign ministers of Egypt, Saudi Arabia, Morocco, the United Arab Emirates and the Palestinian Authority attended the meeting along with the head of the Arab League, Ahmed Abul Gheit.

Speaking alongside Safadi, Gheit said foreign ministers would attend a meeting of all Arab League states to discuss the decision at the end of January. He added they would also discuss Washington's role in ongoing peace talks between Israeli and Palestinian leaders.

"We want to lessen any losses on the Palestinian side and lessen the Israeli gains," he said.

Read more: Dozens of Palestinians injured in clashes with Israeli security forces during 'Day of Rage'

Many Arabs consider the eastern part of Jerusalem as the capital of a future Palestinian state. They reject Israel's claim over the entire city, which it captured in a 1967 war and later annexed, as illegal.

The Arab League branded the move a "dangerous violation of international law" with no legal impact.

At the end of December, a majority of the UN General Assembly rejected the US decision, while the Organization of Islamic Cooperation (OIC) called on "all countries to recognize the State of Palestine and East Jerusalem as its occupied capital."

The city's fate is a central issue in the ongoing peace talks between Israeli and Palestinian leaders.

In 2012, the UN General Assembly voted to make Palestine a "non-member observer state," deemed by many a de facto recognition of statehood. It also reiterated a longstanding UN call for Israelis and Palestinians to resolve the future status of Jerusalem through negotiations.

Jordan's King Abdullah II appeared to support that position on Saturday when he told Arab diplomats that "the question of Jerusalem must be resolved within the framework of a just and lasting peace agreement between Palestinians and Israelis."