iPhone manufacturer Apple has removed a smartphone app criticized by China for aiding anti-government protesters in Hong Kong. Apple said the app had "been used to target and ambush police." 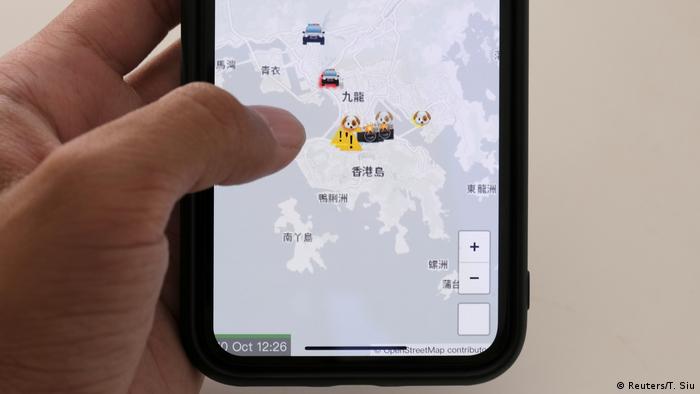 Apple said in a statement on Thursday that the mapping app, named HKmap.live, had been removed "because it has been used to target and ambush police" and to "threaten public safety."

The ruling Chinese communist party had said on Wednesday that the app "facilitates illegal behavior," claiming that protesters were using it to communicate the locations of police and tear gas use in Hong Kong.

In their announcement on Thursday, Apple did not refer to Chinese comments but said that the app had been removed because it violated local law and Apple guidelines.

The app's developers responded that they do not believe that the app "endanger[s] law enforcement and residents in Hong Kong."

They also claimed that "according to most user reviews" the app had had "IMPROVED public safety, not the opposite."

In an article in their official newspaper on Wednesday, the Chinese communist party called the app "poisonous" and said it was "guiding Hong Kong thugs."

The app had only been approved by Apple's App Store last week. The tech firm said in their statement that they immediately began an investigation after "many concerned customers in Hong Kong" contacted them, concerned the app was aiding and abetting violence.

In a separate move, Apple removed the news app Quartz from the app store in mainland China as the Chinese government said the app violated local laws. Apple has faced criticism for reportedly bowing to Chinese pressure.

"We abhor this kind of government censorship of the internet," said Quartz CEO Zach Seward. "We have great coverage of how to get around such bans around the world."

Protests in Hong Kong have been ongoing for four months, with protesters initially fighting for the removal of the controversial extradition bill and then for broader democratic rights in the special administrative region.

China is yet to intervene directly in the protests, but this week Hong Kong Chief Executive Carrie Lam refused to rule out the possibility of Chinese military intervention.