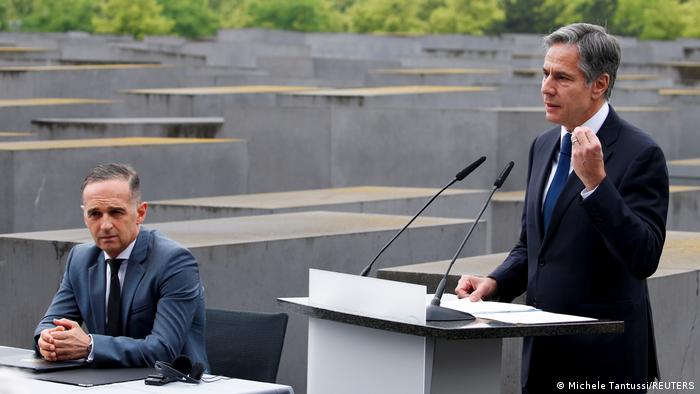 Maas, left, and Blinken both spoke during a ceremony at the Holocaust Memorial

US Secretary of State Antony Blinken and his German counterpart, Heiko Maas, visited the Memorial to the Murdered Jews of Europe on Thursday, pledging stronger cooperation between their two countries on Holocaust remembrance.

Blinken, the son of American Jewish parents, thanked the survivors present, including 99-year-old Margot Friedländer, for their efforts in passing on their knowledge and experiences.

The agreement reached between Berlin and Washington on Thursday will help "remind us of all that we can lose — but also to see what we can save — if we choose to stand up instead of just standing by," Blinken said.

Standing in front of Berlin's 2,711 concrete slabs serving as a remembrance and warning, Maas said he was "very pleased" about the launch of "German-American dialogue on Holocaust issues at this special place."

The German foreign minister said it was important to "prepare" for a "culture of remembrance for a turning point in time."

In view of the fact that the last eyewitnesses will soon no longer be able to pass on their experiences, new forms of remembrance must be found, Maas stressed.

"We owe this to those who were murdered and to the survivors," he added.

"I know how much your family's personal experience of the Holocaust shapes your daily actions," Maas said, referring to Blinken's family history.

Blinken's stepfather Samuel Pisar survived the Holocaust.Pisar, who was from Bialystok, Poland, survived the Nazi death camps of Treblinka, Majdanek, Auschwitz and Dachau.

"When he was liberated by US soldiers in 1945, he was the only survivor of his family," Blinken said.

Germany has an 'everlasting responsibility'

In the course of the Second World War, the Nazis murdered at least 6 million Jews.

In 1938, the Nazis organized pogroms all over Germany. Jewish houses, synagogues, and shops were destroyed during what became known as Kristallnacht.During the pogrom, thousands of Jewish people were rounded up and imprisoned in death camps.

In January this year, to commemorate Holocaust Remembrance Day, German Chancellor Angela Merkel said she was "deeply ashamed" of the atrocities committed by the Nazis.

Maas and Blinken on Thursday also warned out about the resurgence of antisemitism and racism in recent years, in both the United States and Germany.

"Let's think of the yellow stars at coronavirus demonstrations, the flood of anti-semitic conspiracy theories on the net, the attacks on synagogues and Jews, the rioters in front of the Bundestag or the uninhibited mob in the US Capitol," Maas said.