Germany's foreign minister and Angelina Jolie want more to be done to fight the use of rape as a war tactic. They issued a plea as the UN prepares to vote on a German resolution tackling the issue but face US opposition. 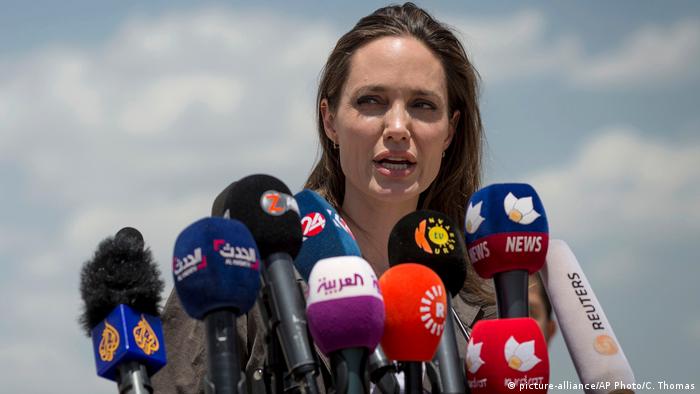 German Foreign Minister Heiko Maas and Angelina Jolie have penned a joint op-ed in The Washington Post calling on the international community to better support survivors of sexual violence and punish perpetrators who use rape as a weapon of war.

Germany hopes its resolution aimed at tackling these concerns will be adopted at a United Nations Security Council session on Tuesday. But it's facing some resistance from the United States, which has threatened to veto the text over some of the language surrounding reproductive health.

Read more: Opinion: UN must do more to end rape in conflict zones

The main points from Maas and Jolie:

Special Security Council session: The German mission's resolution on conflict-related sexual violence is due to be debated and put to a vote at the UN Security Council on Tuesday. It's a significant occasion for Germany, which is the current holder of the council's presidency. Actor Angelina Jolie, the co-founder of the Preventing Sexual Violence in Conflict Initiative, is a key supporter of the effort.

Changes to the text: According to diplomatic sources cited by German news agency dpa, the resolution has been watered down significantly in negotiations leading up to the debate. For example, mention of setting up a formal mechanism to monitor and report atrocities was scrapped after opposition from China, the US and Russia.

Battle over wording: A diplomat told dpa the US had also threatened to veto the text over statements about women's sexual and reproductive health. Germany and other European states such as the UK and France are reluctant to make changes to the language on access to family planning, warning it would be a step backwards for women's rights. The US frequently objects at the UN to such wording, which it sees as endorsing abortion.

UN adopts resolution on rape in conflicts after US threatens veto

The UN Security Council bowed to pressure from the United States after it threatened to veto a German-drafted resolution on rape in conflict. Germany said the resolution still strengthens justice for victims. (23.04.2019)

A UNHCR report has found that sexual violence towards boys and men stemming from the Syria conflict has been far more prevalent than was previously thought. Some of the victims were as young as 10, the oldest over 80. (06.12.2017)

She escaped from a living hell: Nadia Murad gives a face to the thousands of Yazidi women who were raped by members of IS. Her efforts to end sexual violence as a weapon in war earned her the 2018 Nobel Peace Prize. (10.12.2018)

Foreign ministries from Germany and the UK have released a statement suggesting closer collaboration as well as the UK's backing for Germany to have "a new permanent seat at the United Nations Security Council."

Germany stands firm on conditions for relationship with Taliban 22.09.2021

As the Taliban government pushes to be recognized by the international community, Germany has listed a set of requirements that need to be satisfied.