Kosovo: Survivors of wartime sexual violence speak out | Europe| News and current affairs from around the continent | DW | 09.12.2018

After many years of silence, hundreds of survivors of sexual violence during the Kosovo war have decided to come forward. Researchers argue that this crime was a weapon of "ethnic cleansing." 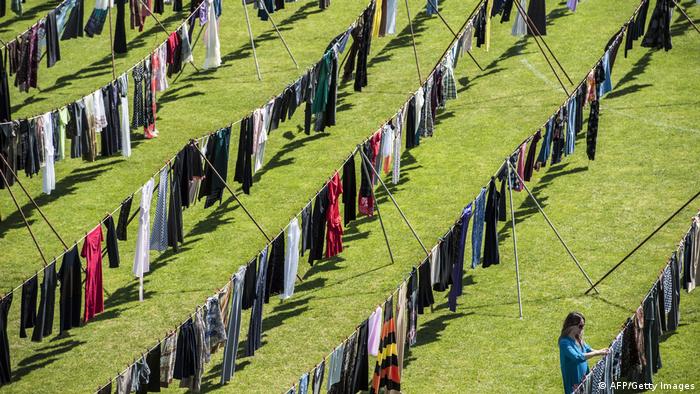 While she was being raped by a Serbian policeman and a civilian, Vasfije Krasniqi asked the policeman to kill her. She was only 16 when the men took her from her family home in Northern Kosovo on April 14, 1998. Back then, she saw death as the only possibility to escape her ordeal. "But he answered: No, you will suffer more if you stay alive," Vasfije Krasniqi said in an interview with Kosovo's public TV station RTK. She recalled how she addressed the United Nations Interim Administration Mission in Kosovo (UNMIK) after the end of the war to place charges against the men who raped her. But even after three trials, none of them was punished. One of them still lives in Kosovo, where he works as a policeman.

Today, Vasfije Krasniqi lives in Texas and is the mother of two children. In October, she returned to Kosovo to tell her story in a 25-minute television interview. Her rare act of courage has deeply moved the entire country.

It is estimated that thousands of people were victims of sexual violence during the Kosovo conflict of 1998-1999. Although they didn't talk to the media, as Vasfije Krasniqi did, 278 female and two male survivors spoke to members of Medica Gjakova about what happened. This NGO in Kosovo registers and supports survivors of wartime sexual violence.

Read more: Redrawing Balkan borders: A strategy without a solution 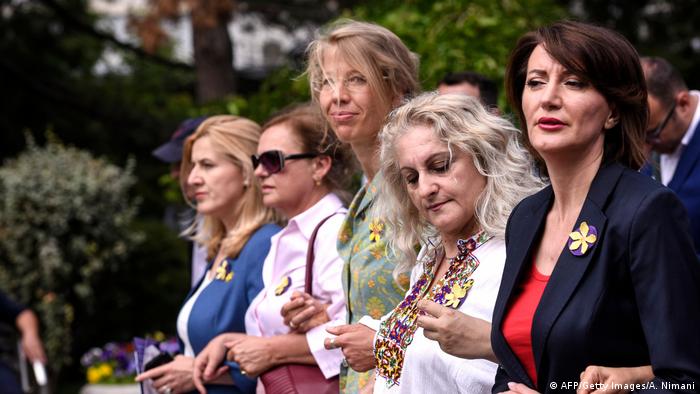 In June 2018, a march was held in Pristina to show solidarity with victims of sexual violence during the war

On the basis of this information, sociologist and policy analyst Anna Di Lellio, a professor at New York University who had worked in Kosovo for years, conducted research on sexual violence during the Kosovo conflict. Together with Garentina Kraja, an independent researcher from Kosovo, and Mirlinda Sada, the executive director of Medica Gjakova, she brought new evidence to light. The results of this research were published this winter in the magazine Prishtina Insight. "We are able to show that the victims have been raped precisely in certain places and on certain dates, where mass killing happened," Di Lellio tells DW. The evidence is remarkable: "We have a picture, like a photograph, that includes the killing of dozens, sometimes hundreds of men, and an equally high number of rapes, as well as the burning of the houses and mass expulsions."

The researcher underlines that the nature of the crimes was systematic: "This is a picture of ethnic cleansing. When you destroy the house, you expel the people, you kill the men, you rape the women, and also rape some of the men," she says. In the article, Di Lellio also pointed out that the first time the crime of wartime sexual violence was given the label of 'tool of war' was during the conflict in Bosnia and Herzegovina.

'A war crime and a crime against humanity'

In a similar way, the victims of wartime sexual violence in Kosovo "were sexually assaulted and insulted because of their ethnic origin. What the Serbian police, army, and paramilitaries did to Albanians during the war was ethnic cleansing, and rape was a tool of their strategy," Anna di Lellio added. "The rapes perpetrated by Serbian security forces in Kosovo were a war crime and a crime against humanity."

The stories of the 280 survivors have a lot in common. They were also tortured, cut and beaten, cigarettes were burned on their bodies, and there were always multiple perpetrators. While going through this nightmare, they were often insulted by being told: "You are Albanian women, so you can endure this, you are used to it," or "We're gonna show you what Serbian men are." Almost all of these 280 victims are ethnic Albanians, apart from 11 Roma women. All but one were raped by men from the Serbian security forces; only one Roma woman said that the perpetrator was an Albanian man.

For the victims, the war has never ended

During the war, the crime of sexual violence against women was part of the narrative, but postwar Kosovo stayed silent on this issue. The late Sevdije Ahmeti, who was a leading activist during the war, went to UNMIK at the start of its administration with 37 cases under her arm, hoping to bring justice to the survivors. But nothing happened on the institutional level. Help for the victims was mainly provided by women's organizations, which kept working on identifying and rehabilitating survivors.

Five survivors went to the International Criminal Tribunal for the former Yugoslavia (ICTY) in The Hague as witnesses against indicted Serbian security officials. There was only one conviction for sexual assault, in the case of General Nebosja Pavkovic: "He should have known that rape was happening," the verdict concluded, because the military in Serbia reported that this was going on, "but he didn't do anything to stop it." In three other similar cases of sexual violence, the accused were not convicted initially, but the judges reversed the previous verdicts on appeal.

Read more: Can the frozen Kosovo-Serbia conflict be resolved?

Between 2002 and 2014, the ICTY shifted its perspective: When the judges took into account the context of sexual violence in the Kosovo war — mass expulsions, killings and destruction — they called it a "crime against humanity." Consequently, they convicted the commanders who allowed it.

For survivors of sexual violence, the war has never ended. "And it will never end. It is going to last as long as they live," Anna di Lellio concluded. "But we can help them by recognizing what they are going through, and supporting them. I think this is what they need. Justice would be nice, but it is really very hard to imagine how it can happen for all of them. So many years have passed. One thing would be incredible: if Serbia recognized and acknowledged what Serbians have done to Kosovo."

The EU's Special Investigative Task Force said it has evidence to file an indictment against former senior officials of the so-called Kosovo Liberation Army. They are accused of violating international humanitarian law. (29.07.2014)

The EU's rule of law mission in Kosovo is handing over responsibility for judicial affairs to local authorities. Critics say the decade-long program failed to hold high-level criminals and corrupt officials to account. (14.06.2018)

The European Commission president should be cautious on his western Balkans tour to discuss the prospects of six states joining the EU. Expanding the bloc too quickly would be a mistake, says DW's Zoran Arbutina. (25.02.2018)