Germany's chancellor says she is prepared to consider a euro budget, as well as a joint finance minister for the eurozone. But she stressed that such profound changes would only make sense if they increased prosperity. Angela Merkel told business leaders in Berlin on Tuesday that she was open to reforms, saying the economic cohesion of the 19 countries in the euro area "leaves something to be desired."

"We could of course consider a common finance minister, if the conditions are right," and if there is a proper balance concerning risk and liability for debt, the chancellor said in a speech at the annual congress held by Germany's largest industrial lobby, the BDI (the Federation of German Industries).

"We could also consider a euro-budget if it is clear that we are really strengthening the structure of the economy," she said. "We shouldn't say what is not possible, but rather consider what makes sense."

Recently elected French President Emmanuel Macron has advocated strongly for such reforms, arguing that the euro currency bloc is in desperate need of a shakeup. He says the group should have a separate budget, as well as its own parliament and finance minister. The European Commission has also put forward similar proposals. 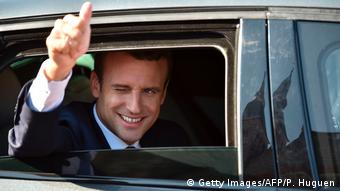 Emmanuel Macron has called for a shakeup of the eurozone

BDI President Dieter Kempf told the conference that he was in favor of a common budget and finance minister if such measures were "designed properly." He said such reforms could help tackle problems early on and reduce the likelihood of a genuine economic crisis.

But the leader of Germany's Free Democratic Party, Christian Lindner, was more skeptical. He questioned the need for a separate budget, saying there were already structural assistance funds to support weaker EU members. He also voiced concerns that Macron's proposal would lead to the eurozone setting up its own taxation regime as well. Green Party head Cem Özdemir called for a European Monetary Fund to better assist weaker regions in the EU.

Victory for Macron – Challenge for Europe?

Germany and France - the eurozone's largest economies - agreed last month to set up a bilateral panel to launch the currency area's reform process. The new working group, expected to report to a ministerial meeting in July, will look at how the bloc can better coordinate economic policies and harmonize its tax regime.

Merkel is running for a fourth term in Germany's September general election, while Germany currently holds the rotating presidency of the Group of 20. The chancellor told business leaders in Berlin that she would fight for a free-trade deal between Europe and the US at next month's G20 summit in Hamburg, but admitted that Donald Trump's "America first" approach to trade negotiations wouldn't make it easy.

"We will do everything to achieve as broad an agreement as possible on this in Hamburg," Merkel said. "In view of the new American administration that isn't easy, but we must make the effort nonetheless."

What German industry expects of Merkel's visit to US

German industry leaders have said they're optimistic about the outcome of a planned meeting between German Chancellor Angela Merkel and US President Donald Trump in the US. They hope current tensions can be defused. (13.03.2017)

German politicians from across the spectrum have welcomed French President Emmanuel Macron's plans for strong reforms. Macron's party is on track to seize control of the parliament. (12.06.2017)

EU finance ministers: Greece and the future of the eurozone

EU finance ministers have done a great deal of thinking about the future of the eurozone. Greece, currency reforms and refugees were the buzzwords, but decisions will be made later. Bernd Riegert reports from Luxembourg. (13.09.2015)