After vowing to make changes in light of a damning report on staff well-being earlier this year, Amnesty International has replaced most of its top leaders. Yet employees at many other NGOs also face the same problems. 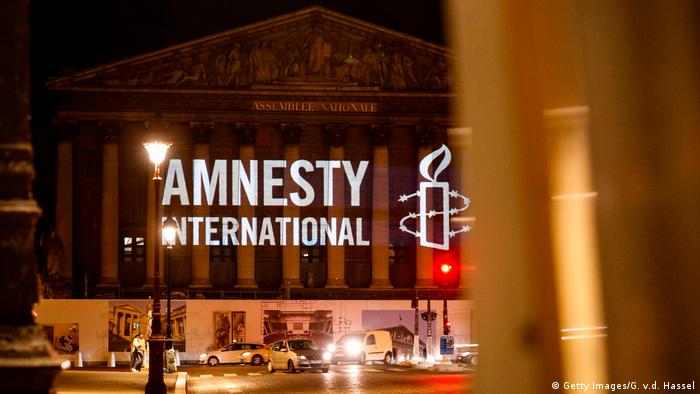 Amnesty International has announced that five out of its seven-strong senior management team will resign by October. The news follows the publication of an independent review of staff well-being at the London-based human rights organization earlier this year, which said Amnesty is permeated by "toxic" working culture.

The report said employees suffered "exceptional stress," "bullying and public humiliation as a management tool," mistrust, underappreciation and a "us versus them" dynamic pitting management against staff members.

The review was ordered after a well-known researcher, Gaetan Mootoo, and paid intern Rosalind McGregor committed suicide within months of each other last year. In his suicide note, Mootoo complained of work pressure and a lack of management support, while McGregor reportedly suffered from insomnia and anxiety.

Amnesty employees have also complained of abuses of power and discrimination. Almost 40% of the 475 interviewed employees said working for the organization had caused them psychological or physical problems. The report found that most "efforts to support staff well-being have been ad hoc, reactive and piecemeal."

Amnesty isn't the only non-governmental organization to face serious criticism.

In January, British charity Oxfam published an independent interim report on the state of its working environment. It found that Oxfam staff had complained of racism, elitism, bullying and strict top-down hierarchies.

And last October, an independent report revealed that the work environment at British aid group Save the Children was anything but exemplary. Almost a third of interviewees said they had been harassed or discriminated against while working for the NGO over the past three years.

British journalist Shaista Aziz, who last summer wrote in The Guardian about her time working in the aid sector, said "what often threw me was the gap between the image of the organizations I was working for and the toxic atmosphere within them."

Aziz said she had "been subjected to some of the worst forms of racism, sexism and sexual harassment that I've experienced at any time in my life." She added that such organizations have for too long "focused on and peddled on their image of do-gooding in the world without wanting to address the dark underbelly that exists within."

But how is it that, of all places, aid agencies feature such toxic work environments? One reason may be that employees who are permanently confronted with atrocities can suffer "secondary stress or vicarious trauma," as the Amnesty report calls it. It cites an interviewee saying that "spending every day seeing the worst people can do to people takes a real toll. I started to have nightmares about being unsafe, or being tortured or killed."

Maggie Schauer, who heads the Center of Excellence for Psychotraumatology at the University of Konstanz, said people faced with such information on a daily basis need social and psychological support. And, as they can often be reluctant to share their feelings with supervisors, "a supportive work environment where colleagues help each other is key." But this is where, judging by the slew of independent reports, Amnesty and other aid agencies have much catching up to do.

Heike Spielmans heads VENRO, an umbrella organization of development and humanitarian aid agencies, which represents some 140 German NGOs. She told DW that while there is widespread awareness of the danger that humanitarian activists face through direct trauma, the risk of indirect trauma may remain relatively unknown.

According to Spielmans, humanitarian activists may feel especially stressed because they are driven by a pronounced sense of idealism. One interviewee, for example, is cited in Amnesty's report describing a "martyrdom culture" in the organization "which encourages people to sacrifice their own well-being because of the critical importance of the work."

Spielmans warned that sometimes individuals who go about their work with such dedication may need to be "protected from themselves."

"It's the responsibility of management to ensure that young people, in particular, take good care of themselves," she said.

Wladislaw Rivkin, a specialist in work and organizational psychology at Birmingham's Aston Business School, agrees. He said that the phenomenon of "overcommitment" can lead to exhaustion, which can also have a negative impact on a person's psychological health.

"People who work at charitable organizations aren't by default better human beings than others," said Spielmans. "NGOs should scrutinize their own organizations to check whether they are actually practicing what they preach." She said management carries a great responsibility to "create an organizational culture built on awareness, as this doesn't evolve naturally, not even at NGOs."

But, as Spielmans pointed out, many NGOs — supported by donations — are under intense pressure to lower their expenses. This, in turn, limits their ability to have staff specially trained.

Amnesty, Oxfam and Save The Children have at least made a step in the right direction by commissioning independent reports on staff well-being. And last year, VENRO issued an obligatory code of ethics for all its member organizations.

Among other things, it recommended a neutral ombudsperson for NGO staff members. The NGOs have also agreed to "foster an environment which prevents and fights the abuse of power."

The KonTerra Group, which carried out the review of Amnesty's working environment, has recommended the organization implement a range of improvements. "Staff well-being is now our absolute priority and will be at the heart of everything we do," said Secretary General Kumi Naidoo in January. Should Amnesty actually follow through with these changes, other NGOs could look to it for some insight.

#ToxicTwitter: Do we need a new culture of debate?

Hate speech, abuse, belittlement: DW contributor Courtney Tenz looks at how #ToxicTwitter is shifting our culture of debate — and wonders why, if we can't say something nice, we are saying anything at all. (15.01.2019)

The World Wide Fund for Nature has commissioned an independent review to investigate reports of murder, torture and raids by rangers the charity supports. The accusations came to light in a US media report. (05.03.2019)

Deutsche Welle has joined the One Free Press Coalition, a group of publishers using their global reach to spotlight journalists under attack around the world. A new list will be published each month. (01.04.2019)

For the past 60 years, Amnesty International has put its finger in the wound of human rights abuses in all shapes and forms around the world. But it's also faced widespread criticism for some of its more opaque actions.

Employees at the Maxim Gorki Theater in Berlin accuse artistic director Shermin Langhoff of bullying and abuse of power — and took the case to court.

A US court has ruled in favor of a Black former employee who was subjected to racial abuse by his colleagues, ordering he be paid an unprecedented $130 million in damages.