#ToxicTwitter: Do we need a new culture of debate?

Hate speech, abuse, belittlement: DW contributor Courtney Tenz looks at how #ToxicTwitter is shifting our culture of debate — and wonders why, if we can't say something nice, we are saying anything at all. 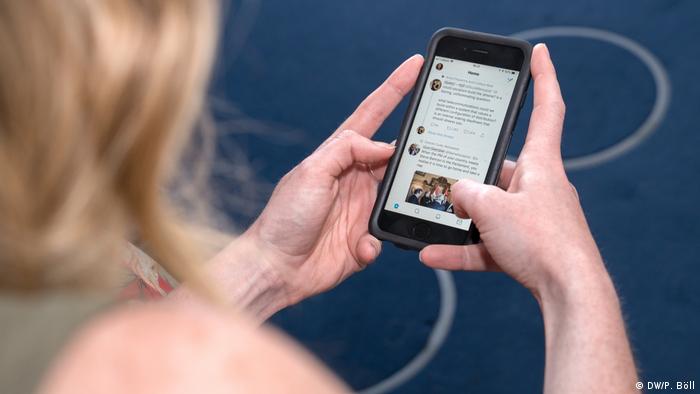 The first time I deleted Twitter was in January 2016 — and no, it wasn't because I'd made a New Year's resolution to spend less time online.
As a freelance journalist who has often written on women's issues, I had read a short article in the local newspaper noting that women had been attacked at the Cologne train station on New Year's Eve. I translated the German headline into English for my followers and included #cologne; the tweet got less than a dozen likes before it slid down my timeline.

Three days later, the harassment started. Men, most of whom had set their location in the UK, many of whom had anonymous profiles, had followed the hashtag and begun tweeting xenophobic, misogynistic comments at me. Instead of having to endure their rhetorical threats, I deleted the tweet. When they didn't stop, I deactivated my account.

As a writer, I knew that deactivating my Twitter account wasn't ideal. Not only do we in the media use the platform to look for stories, we also use it to promote our own work. By giving up Twitter, I was taking a risk: If I left completely, anyone could have created a handle in my name or taken over the one I'd previously used, adopting my likeness.

Before the month was up and the deactivation turned into a permanent deletion of the account, I logged back in.

Still, it hasn't been easy for me — or my fellow journalists — to remain on the platform. And it seems to have only gotten worse, especially for women, in recent years. Already in 2014, a handbook from the International Association of Women in Radio and Television reported that women received three times as much abuse on Twitter as their male counterparts.

The harassment some women face on the platform even led Amnesty International to conduct a two-year study, the findings of which were released in late 2018 under the heading #ToxicTwitter.

"Although people of all genders can experience violence and abuse online, the abuse experienced by women is often sexist or misogynistic in nature, and online threats of violence against women are often sexualized and include specific references to women's bodies," the report states.

"Overall, our findings paint a worrying picture that Twitter can be a toxic place for its female users. The company's failure to meet its responsibilities regarding violence and abuse means that many women are no longer able to express themselves freely on the platform without fear of violence or abuse," writes Amnesty.

If you don't have something nice to say…

Indeed, it's the notion of freely expressing myself online that I've struggled with in the years since my first deactivation. Initially, I had been using my feed mainly as a way of staying in touch with friends and editors around the world, posting dumb jokes or promoting an article I'd written. Yet it's begun to feel nearly impossible to even do that.

The more time I spend on the platform, the worse my mood becomes. Like Green party politician Robert Habeck, who last week quit the social media platform after a massive data breach, I've had a hard time with the way I voice my opinions there. As he wrote: "It appears Twitter triggers something in me, I become more aggressive, louder, more polemic and to the point."

I have often found myself writing tweets only to erase them, that old adage about if I don't have something nice to say, I shouldn't say anything at all running through my head.

And yet when a woman does choose to express her opinion online — no matter how mundane the topic — she gets threatened. The writer Geraldine DeRuiter recently asked women about opinions they'd posted on Twitter that attracted online harassment, and the answers were as banal as they were predictable.

Mention video games or dis a favorite pop star and you can anticipate being cursed at, having your knowledge belittled or even being threatened by complete strangers. Share a political opinion or support for the equal rights of men and women and expect to be piled on — or even become the focus of a news broadcast that sends trolls in your direction.

At the same time, as a freelance writer who has received article assignments based on tweets I've sent, it seems important to have a voice on some of the topics I cover. Twitter has become an integral part of the media landscape, a place where editors, publishers and book agents alike commingle and where a strong presence can make a writer's career.

Yet I do know that the stronger my opinion, the stronger the pushback. That tweeting something like #believewomen will cause my mentions and direct messages to fill up. I also know that, as Amnesty International wrote in its report, "The aim of violence and abuse is to create a hostile online environment for women with the goal of shaming, intimidating, degrading, belittling or silencing women."

I don't have the stature of a writer like Roxane Gay, whose mentions are filled with hate every day. I don't have the fortitude of Egyptian-American journalist Mona Eltahawy to take on those calling me names in numerous languages. I rarely post on the topics causing the greatest controversy at the moment, fully aware that not everyone has to have an opinion on everything. But when I do have an opinion, I find myself biting my tongue now more than ever. Most days, I do not have the energy to deal with the kind of hate these other authors receive for their work.

But is it better to stay silent than take on people invested in belittling me and other women? People who may not even be real; people who have masked themselves with fake avatars or otherwise draped themselves in anonymity; people whose sole aim, it seems, is to keep us quiet? Are we really expected, as women with a public profile, to wade through others' misery and shrug off attacks wrought by prejudice as a part of our career paths?

In early 2017, I stood at the back of a filled-to-capacity conference hall beside a young man sucking on a vaporizer and listened to Twitter CEO Jack Dorsey sell it as the platform for conversations. A sort of public square, where politicians were transparent and could be held accountable by those they serve. The place to take the temperature of society. Courtney Tenz is a DW correspondent based in Cologne

As he spoke, I contemplated sending a tweet about the audacity of the guy next to me smoking inside a smoke-free building, a virtual eye glare in his direction that he'd never himself witness. And I wondered about that impulse in me. If I can't tell this man to his face that I find his behavior appalling, why would I do it online? Does my Twitter feed truly reflect a conversation I would have in real life? Is it a discussion I actually want to be a part of?

Considered the other way around: Would I, in real life, stand for someone screaming at me or calling me names because I said I don't like Ed Sheeran? Why, then, was I willingly logging into an app — for fun! — where people did just that?

If Twitter really is reflective of where we are as a society, maybe it's time we take a harder look at ourselves — both at our views toward women and at our culture of debate.

A study by two German researchers at the University of Warwick suggest that there is a correlation between social media usage and hate crimes. DW interviews one of the authors of the study. (22.08.2018)

A federation representing more than 100 mosques in the Netherlands has called on Twitter to block the account of anti-Islam populist Geert Wilders. The group says it will take legal action if the platform fails to act. (06.11.2018)